Photo-diode for a high-frequency tachometer

I intend to build a tachometer, which is capable of detecting rotations up to 1kHz (60 000 RPM). From the Internet I know that this is possible to do with a magnet and a Hall detector. However, I would prefer a non-invasive solution with a light and a photo-detector, but from Internet it seems that ordinary low-cost photo-diodes are just too slow for such a task (700 RPM in this video https://www.youtube.com/watch?v=WG_4iChrvR4).

I assume that I would need a photo detecting device, which response time is at least an order of magnitude lower than the period of the oscillation, that is less than 100 micro-s. Are there any photo-detectors (photo-diodes) capable of that? If possible, please suggest a product.

Never, ever, assume that a Youtube video presenter knows what he or she is talking about, unless he or she presents some credentials. From the video, it appears that the circuit being shown looks like 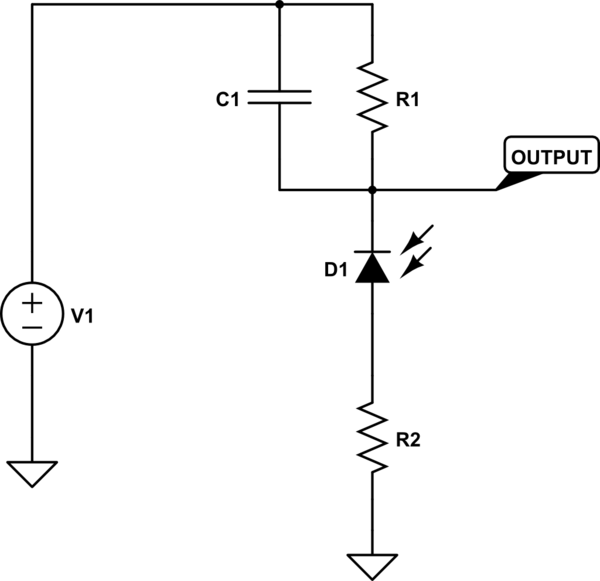 Granted, backing out connections from a video is chancy, but that's what it looks like to me.

With this setup, it's the R1/C1 combination which limits the bandwidth, not the photodiode. I would suggest that the photodiode under discussion is probably good well into the MHz regime (since it's in a 5 mm package, which implies a small die area and low capacitance).

Assuming, of course, that you used a decent conditioning circuit and don't look at the wrong component as the culprit.

Here, for instance is a 50-cent IR diode in the same package. If you'll note the data sheet, the rise and fall times are under 10 nsec, which implies operation to something like 100 MHz. Granted, stray capacitance would make this a bit difficult to achieve, especially if you make the mistake of trying to do it on a breadboard (like the video), but that's the fault of the breadboard.

TLDR: The video is wrong.

The video setup of jumper wires and opto-mechanics were "mickey-mouse" for any precision sensing at high speed.

However in order to get more speed with a fixed diode capacitance and lower Load R the signal amplitude of the expected 1~10uA for this application.

I picked a PD for you that is cheap and narrow angle adn radial THT suitable for reducing the aperture easily to block stray light.

I trust you can make a suitable reflective aperture for the PD to block stray light or slot interruptor.

here is one good IR LED . Use heatshrink tubing over the lens to reduce spraying stray light. The chip will be <1.5mm so the aperture can be 1~3mm depending how careful you can align this. The goal is to get at least a stable signal for entire rotation +/-10% adn then >95% reduction with the "Index" mark to get 10:1 SNR minimum, Then the index can be sliced at a fixed threshold with a comparator or saturated TIA Op Amp as a logic level. Use a high GBW RRIO type Op Amp.

A divider or dual aperture /|\ holder is ideal with the angles chosen to given < 10% surface reflection variation with rotation yet as close as possible.

Not the answer you're looking for? Browse other questions tagged photodiode phototransistor photosensor or ask your own question.

0
increasing range of photo-diode detector with little voltage
1
Photo diode / light sensor to detect backlight PWM frequency of LED displays?
0
Make a homemade photo sensor?
0
Diode contribution in photo-diode's model
6
In a photo diode in which region light should be focused to fall?
1
How to find polarity of photo interrupter
0
Relation for the current generated by a photo-diode in photo-conductive mode
0
Photo eye sensor signal wiring
0
Photosensitive Diode or photo resistor?