I have very limited knowledge in electronics, but these are my thoughts so far:

Possible problem #1: I read in another question that LEDs are "current oriented" instead of being "voltage oriented" and that there needs to be a circuit controlling the current. Due to the fact that my circuit does not take this account in at all, this could be the problem. If that was the problem, wouldn't the circuit behave in another way?

Possible problem #2: Since the circuit behaves like someone is turning on and off a lightswitch and then leaving it off, I thought about that there was a loose component or two components touching each other creating a short. But I have checked the solders closely and there seems to be no problem with them. (I was very thorough when soldering. I used flux and made sure each solder had good contact with the board.)

Possible problem #3: The LEDs are rated for 3.3 V @ 20 mA, maybe since I'm supplying 6 V with a 330 Ohm resistor resulting in 18 mA they behave this way? I thought as long as the current was close to 20mA they would be fine.

Possible problem #4: I have an error in the layout of my circuit.

Here is the schematics and information about the components:

When testing the circuit I used a DC power supply with voltages 3.3, 5 and 6 with the same behavior. 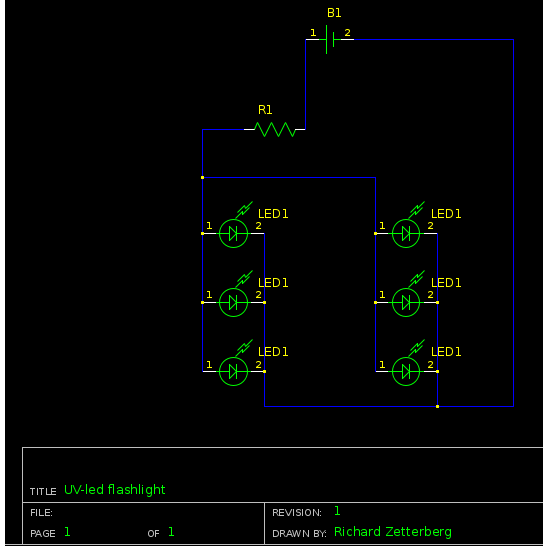 Image of the circuit after soldering: 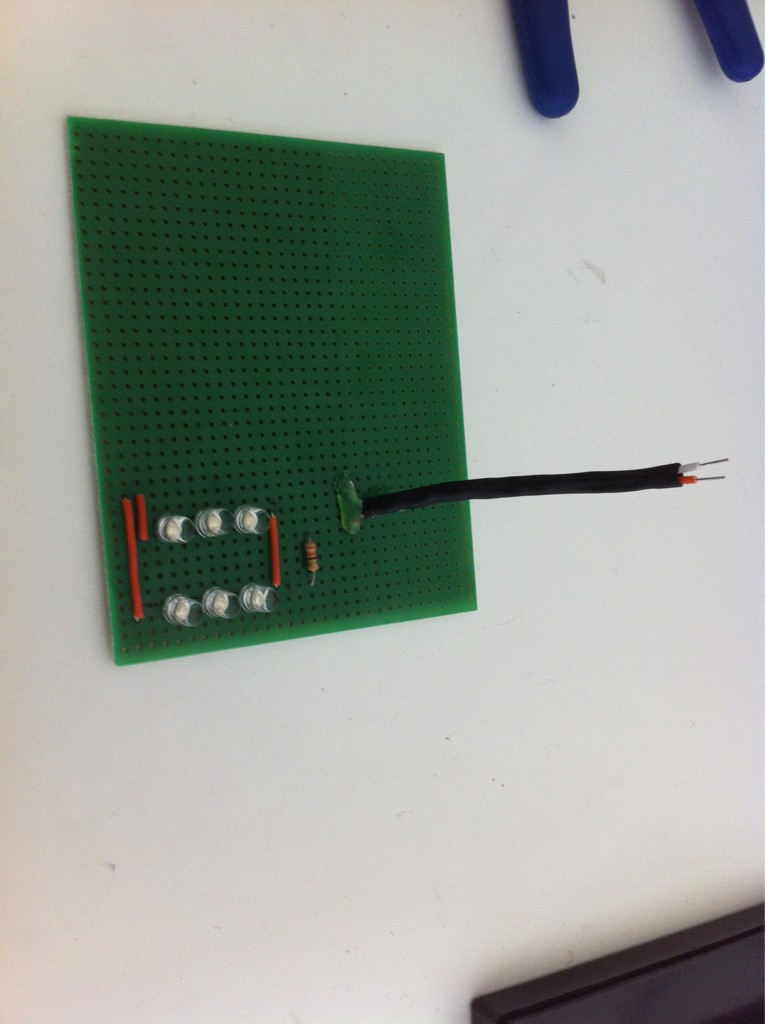 If you would now take a 150 Ω resistor, for (6 V - 3.3 V)/ 150 Ω = 18 mA, that 18 mA will be the total for all LEDs. So each LED would get only 3 mA. But don't decrease the resistor. Instead use one 150 Ω resistor per LED. Paralleling LEDs is a Bad Practice™; if their voltage is not exactly the same one LED will draw much more current than the other. Giving each LED its own series resistor balances the currents.

This may not be a solution for the problem that they go out, but it's something you'll have to fix anyway. Then check if the behavior changes. 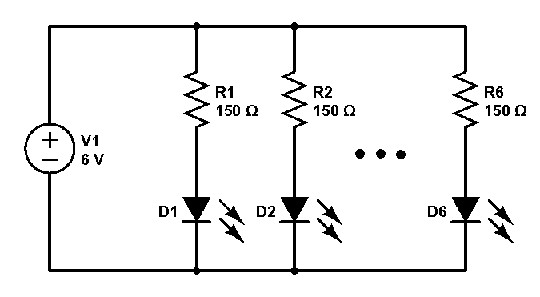 edit
Someone who called himself Jack Goff (he's gone now, but soon will be back under yet another name) suggested the problem was thermal runaway, but that wasn't the case here.

JG suggested to "add series drop for each diode to cause V drop to increase rather than decrease for increasing current". Well, OP had such a device, it's called a resistor. That it was only one for all LEDs is OK to avoid thermal runaway. Firstly, the resistance was 330 Ω, so the total of all LED currents could never have exceeded 18 mA, and even then their voltage would have to go to zero. One LED will have the lowest voltage and therefore take most of the current. Even taking all of it it would only be 9 mA at 3 V, for a maximum dissipation of 27 mW (due to the maximum power transfer theorem). That's 40 % of the power at nominal current and voltage. A further voltage decrease will decrease power, and therefore temperature. So the resistor stabilizes the LED, no thermal runaway, but like I said the single resistor may cause unequal current distribution and therefore unequal brightness.

Not the answer you're looking for? Browse other questions tagged led battery-operated uv or ask your own question.

3
Your thoughts on connecting multiple leds in parallel and series
2
connect LEDs to USB keyboard – but they turn off after a second
2
3 LEDs / 1 POT - fade each LED in turn as POT is changed in value ?
3
9v & 2 high power LEDs | LEDs dim after time, bright again after being off
0
Drive 8 leds with On/Off and PWM using 8 pots and 1 pwm
0
Meanwell LDH-45 LEDs Glowing When Controller is Off