In my project I already have all the circuits for a PWM driving some high power MOSFET. Now the hardware guys are coming with this AC heater, and I've been breaking my head around Triacs and phase controllers but that will be an extra design time that we don't have available.

I wonder if I get the AC through a bridge rectifier (240V, 60Hz) and then through my PWMed MOSFET controlled at 1Khz. I know the final wave won't be pretty to look at in an oscilloscope, but it's just a heater (a resistance), it shouldn't matter if the current is really going or not to both sides.

Does anyone see any problems in doing this setup?

Edit: The PWMs already working in the project through high power MOSFETsare isolate through OpAmps that keeps the proper gate charge levels on the MOSFETs. Those already work nicely controlling a compressor and a pump. The difference from those and the one I'm asking about is only a proper stable DC or a mirrored sine AC between drain and source.

Below is the circuity that is already working for the pump and compressor and the main idea I was trying to re-use it a bit for the heaters. I mean, just because the heater manufacturer said the heater is 240Vac it doesn't meant I can put 240Vdc (full rectified but no capacitor) on it. 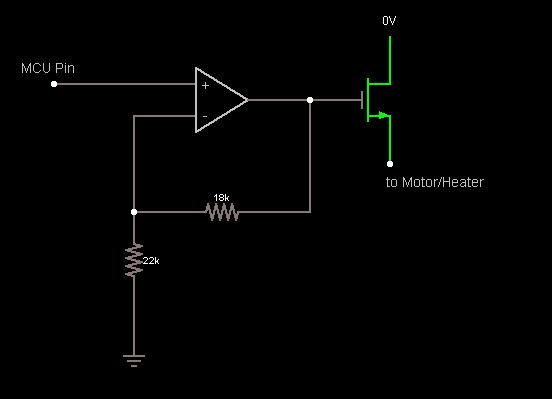 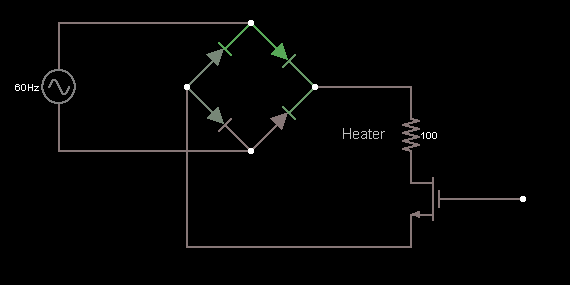 You haven't talked about production volumes and cost-optimization, but a solid state relay (SSR) would give you isolation and phase control in a single package, though at a higher recurring cost than a purpose-built solution.

Many SSRs are available with logic-level PWM input. This link might provide some good reading, though there are many manufacturers of similar products.

One possibly unacceptable effect is that the control circuit is directly connected to the mains this way, and that touching any part of it may be lethal. Proper isolation helps, but it's cheaper to restrict the mains voltage to a part of the circuit.

For a heater you don't need the 1 kHz PWM; its inertia is high enough that you can do it at much lower frequency. I would suggest to use an opto-triac instead of the FET. The triac will have a larger voltage drop than a FET, but for the FET you would have two diode drops too, so that won't make much difference. Also the switching of the FET will cause switching losses as the FET goes through its active region 2000 times per second.

edit re target precision mentioned in comment
Milli-degrees precision is impossible, but not because the on-off control would be too coarse. Suppose you have a vessel with 1 kg of water. (You mention heating around a tube, which may suggest a streaming fluid, but then millīdegrees are even impossibler.) Heat capacity of 1 kg of water is 4.2 kJ/K, so 4.2 J will "heat" it by 0.001 °C. Switching on the 350 W heater for half a 60 Hz cycle gives 2.9 J, good for 0.0007 °C. If you would control each of the 5 heaters individually you can even add per 0.00014 °C, or 14 % of the required precision.

So the coarse on-off control isn't the problem. It's distributing the heat evenly in the fluid, not to mention measuring the temperature. How can you get a to 1 milli-degree even temperature in a vessel (let alone a tube with heating wrapped around it)? Even a magnetic stirrer can't guarantee that. (Note that a magnetic stirrer will also raise the temperature!) And at 60 °C 1 milli-degree is 3 ppm, and to control it to that precision you'll have to measure it to better than 1 ppm. How are you going to do that?

Phase control may give you a theoretically higher resolution, but there's no way to measure its effect, and without the required feedback you can't get the control precision either.

You can use a bridge rectifier to allow the use of a DC switch to control an AC powered in two ways.

At 1 kHz and with a resistive load the lack of synchronisation of the PWM frames with the mains should be acceptable.

If you drive a bridge the switch inside the bridge "floats" and needs to get its drive voltages from somewhere. IF your power supply is isolated at output then the whole circuity can float but is essentially at mains. BUT you can put FET + bridge on the mains side, drive via a non-zero-crossing opto or pulse transformer or whatever and have rest at whatever voltage you wish. You still need to get the FET gate drive but a resistive feed from mains will be OK - half wave diode charges FET gate drive cap when mains polarity is correct.

As ever - IF there is not formal isolation between your main circuitry and the mains switch then ALL your circuitry should be considered to be at mains voltage at all times. This applies even if you consider the circuit SHOULD be on the "cold" side of mains at all times.

Not the answer you're looking for? Browse other questions tagged mosfet ac rectifier or ask your own question.

4
Isolating power for an infrared receiver

2
AC to DC rectifier, smoking
9
How is this 5-24V input circuit working?
1
ZVS induction heater MOSFET failure?
3
Is it possible to power an AC-to-DC switching adapter with a DC input?
5
Storing the charge from a MOSFET Bridge Rectifier
0
Desoldering a TO-220 MOSFET from a plated through-hole board with SMD complications
0
N-Mosfet switch circuit strange behavior laboratory power supply
1
Control PTC heater with mosfet