MOSFET turn off time way too long, why?

I would like to ask what is causing the following phenomenon. I've spotted this on my real buck converter at a low duty cycle first, then tried in my SPICE simulation as well which confirmed this. 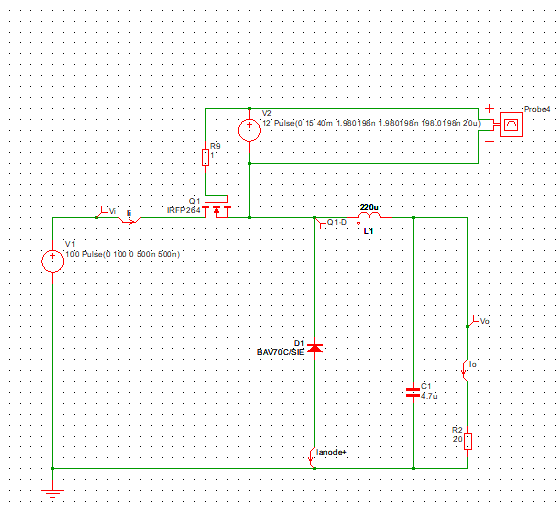 I've set V2 to 50kHz and 1% duty cycle. The FET on time should be 200ns at this point. But the transient analysis shows this: 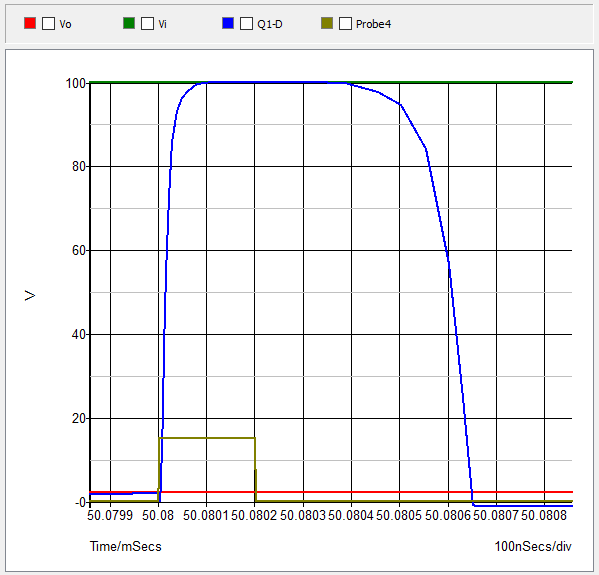 Voltage pulse at V2 really takes 200 ns but voltage Q1-D roughly 600ns! Interesting is that the voltage Q1-D rises almost instantly at turn-on but takes a long delay at turn-off.

Datasheet for given FET says:

These are for slightly different test conditions but that should not be the matter here. At least not the reason for such a long turn-off time. For these times I would expect the Q1-D pulse to last ca 300ns instead of 600ns.

Is there some additional restriction about switching MOSFETs on for a very short time?

Note: This simulation has been done in Simplis Elements 8.1. In real application I use a different MOSFET even with shorter datasheet times but the off-delay is even longer.

As a check, remove C1, D1, and L1, and connect Q1.S directly to R2 so that Q1 drives a purely resistive load (R2). Now run your simulation and probe Q1's gate current.

You'll notice when voltage source V2 shuts off (transitions from +15V to 0V), the accumulated charge on Q1's gate discharges as current through R9, and Q1 remains ON until the gate charge level exits the Miller plateau, at which point the transistor goes into cutoff.

And of course, increasing R9's value slows down the discharge of Q1's gate, which causes Q1 to stay on longer after V2 transitions from +15V to 0V.

So what's the solution? To expedite the discharge of Q1's gate and thereby turn off Q1 sooner, try this. Replace voltage source V2 with a piece-wise linear voltage source (VPWL) and configure its time versus voltage values as follows:

Not the answer you're looking for? Browse other questions tagged mosfet powermosfet or ask your own question.