I have flashed an Atmega16 with code that should result in the Atmega16 sending back whatever character I send to it via a terminal. I get a response, but it is rarely ever the character I sent. I can see correct output by changing the baud rate but I don't understand why the correct baud rate works.

I am trying to learn more about firmware programming in my own time because I quite enjoy it. Thus far in the firmware programming I have done at uni, we have been given skeleton code files that do a lot of the peripheral interfacing and set up for us, but I would like to learn this myself. I've got a few questions about what i'm doing here sprinkled throughout the post but I will itemise them at the end. If you pick up on any misunderstandings or potential gaps in my knowledge, I would greatly appreciate any input you might have.

The code I have flashed onto my Atmega16 is taken almost line for line from the 'Using the USART in AVR-GCC' tutorial found on this page. All I have added is the #define for F_CPU. The original code did not have a #define for F_CPU so my code would not compile in AtmelStudio 7. Could anyone explain why the author would not have defined F_CPU in their original file? I'm guessing they may have been using some other tool or compiler than Atmel Studio 7 but I can't say for certain. 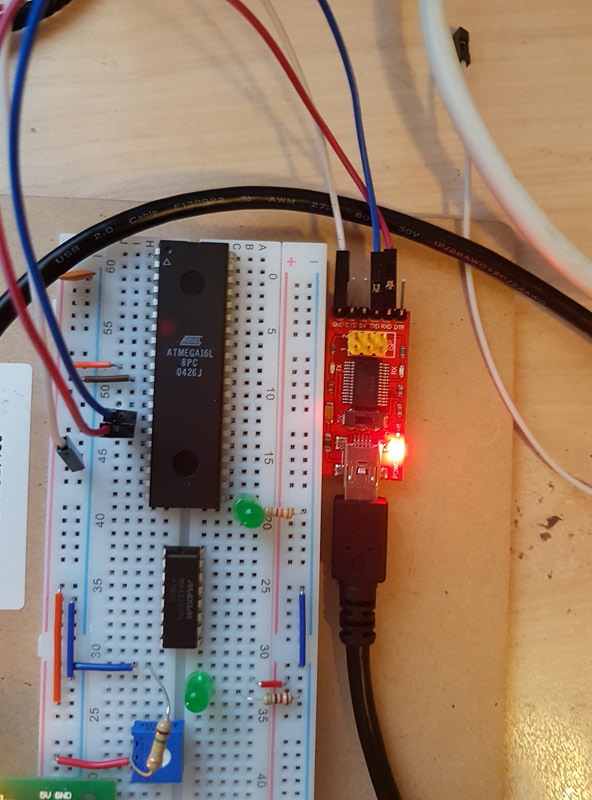 A fix I stumbled upon that I do not understand

If I change the baudrate to 2500in PuTTY, everything is displayed correctly. I chose this value at random and I don't know why it works (it leads me to believe I have made an error somewhere to do with the baudrate but I don't see where given I copied the tutorial almost exactly... I thought).

I've figured it out! Thanks to the comments about F_CPU in response to the OP I did some investigating (this might be obvious to you all).

The Atmega16 was not running at the frequency I thought it was because I did not understand how to change its system frequency. By checking in the fuses in Atmel Studio I could see I was running at 2MHz (this is not the standard clock frequency as far as i'm aware but I won't get into that), and not 7.3728MHz like the tutorial.

Desired baudrate vs what the Atmega was actually doing

The desired baudrate (from the tutorial) was 9600, which is the baudrate I used in PuTTY. The actual baudrate can be calculated using the highlighted equation in Table 60 (page 147) of the Atmega16 datasheet. 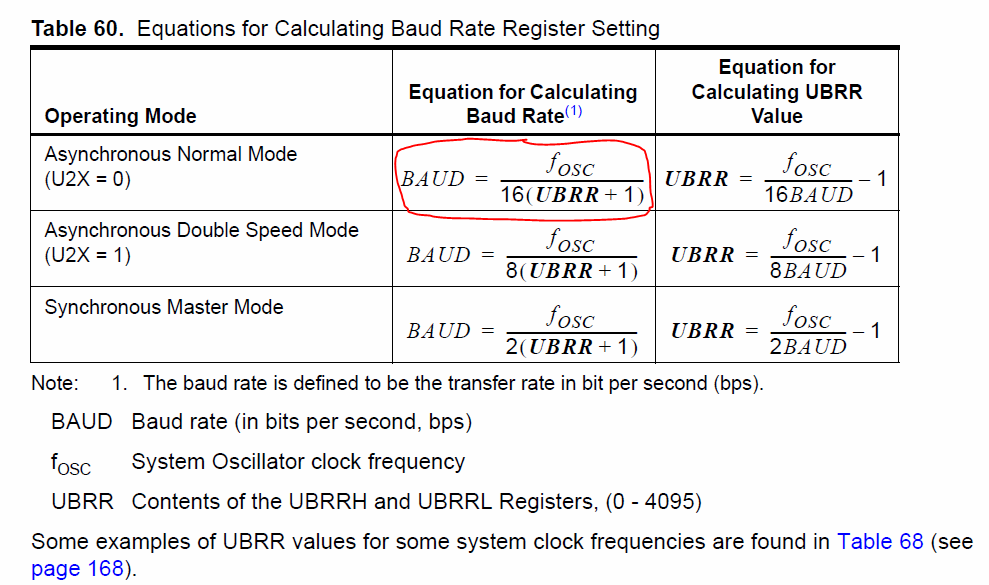 And this was the root of the issue. The Atmega16 was operating at 2MHz, which meant the value of f_{osc} was different to the tutorial example, which resulted in a baudrate of 2,604 as opposed to 9,600.

Notice that f_osc is the actual system frequency of the MCU, which is not determined by F_CPU.

So that also answers my 3rd question: changing the baudrate to 2,500 was luckily close enough to the operating baudrate of the MCU that the terminal could correctly interpret the results.

Changing the frequency of the MCU

To change the frequency of the MCU in AtmelStudio 7, go:

The frequency used in the example is not a standard internal clock frequency so I'm going to stick with 2MHz.

Summary of answers to my own questions

Not the answer you're looking for? Browse other questions tagged atmega serial uart baudrate putty or ask your own question.

2
Why do I need to wait a few moments before sending serial data on my AVR?
0
Setting baud rate for Atmega328p with setbaud.h
1
UART with PC : Reciving absurd characters in PC
1
UART Communication with PuTTY
0
Difference between PuTTY Serial and Modbus
0
Bit rate of uart communication
0
Baud rate for Square Wave data signal via UART if frequency is given
0
Atmega328 ubrr value shifting issue for serial transmission
0
Problems with UART in ATmega