I have written a bootloader before for a STM32 that had support for the vector offset and is easy peasy.

For STM32F0xx using HAL I read I need to move the vector table to ram and copy from flash. I have done as far as I know all the steps described here:

I can jump from bootloader to application but the moment an interrupt comes it crashes.

However, the ONLY thing I haven't done is to use the linker script. I have changed as follow the settings: 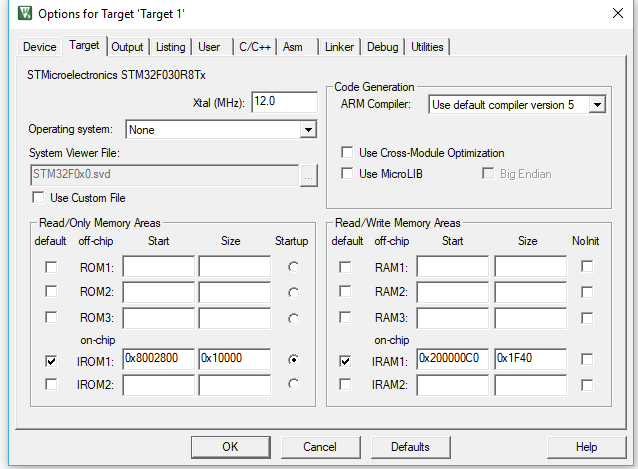 And I have selected "User memory layout from target dialgo" under Linker in Project settings. If I try to use the linker script by just writting):

I get the error:

Without the linker script I can go to application but crash on interrupts. Therefore I assume somehow this magic misterious VTRAM is needed.

My questions are then:

In that linker script, VTRAM is just an arbitrary area in RAM (addresses starting at 0x20000000 are in RAM), where you store the pointers to your ISRs.

As the tutorial mentions, you use the entry in the linker file to tell the linker that those 192 bytes are off-limits for use as normal RAM. If you don't use a custom linker file, the linker uses the default: it may use all memory for any purpose. This would mean that those pointers are over-written with data. When an ISR occurs, it tries to jump to the address in the vector table, which has been over-written and is now garbage.

The linker file in the tutorial is for GCC. Your screenshot indicates you use the Keil IDE, which uses armcc, and does not accept the syntax. You must either:

b. "Translate" the GCC linker file to a "scatter file" (what armcc uses).

The "at" pragma tells the compiler/linker to put the pointer array at the desired location.

You are both right and wrong that "people don't write [linker files] themselves". They do, but typically by changing a template. If you decide to translate to scatter-file, I suggest you look up an example and modify it to fit your case.

(*) technically you only need to call the GNU linker; you may be able to compile with Keil/armcc and link with the GNU linker, but I can't imagine this is worth the effort

Not the answer you're looking for? Browse other questions tagged interrupts bootloader stm32f0 offset or ask your own question.