I am designing the layout of a PCB for audio applications (no digital electronics, only analog).

All components are through hole, the PCB is pretty large (about 16cm x 10cm) and has 2 layers. Plated through hole are supported by the technology I am using. The circuit has a dual supply.

Which (and why) of the following is the best solution for routing signals, power supply tracks and ground?

I think all these other answers are over-complicating the issue. Through-hole designs are legitimate in many cases, and so are 2 layer boards.

I would recommend using a ground plane and a signal/power plane unless you have a reason not to. This design method is tried and true and I don't see any reason you shouldn't use it. I think it doesn't really matter which side you put the signals on.

You will need to make some jumpers in the ground plane, but this won't cause any problems if you avoid making large cuts. I made a quick and terrible image in paint to illustrate:

As Neil mentioned, your ground return paths do matter, you shouldn't just consider them finished when they enter the ground plane.

The one method I'd recommend is the one you haven't mentioned.

Generally, any arbitrary division of spaces into power, ground, signals, is going to give you some grief, because it's neither necessary to partition them like that, nor sufficient to get a good result.

If the board was 'difficult', so mixed analogue/digital, high speed signals, high currents, SMPS, then there would be benefit in starting with a full ground plane. But that's not sufficient, you need to know where the return currents are flowing in it, because you can still shoot yourself in the foot, even with a ground plane.

I would recommend Manhattan layout, with a gridded ground.

The great benefit of Manhattan is it means you can always find a route for your track. You never have to compromise and take a signal a meandering route away from its return path, or cut a ground plane to sneak a track through, destroying its integrity.

Manhattan routing involves dedicating one layer for North-South connections, and the other layer for East-West connections. Now you can always get from A to B with typically one via, and you never have to wonder about how you can cross a track.

Now you have a systemic way to route your board, start with a gridded ground. On one layer, put a track every 20mm or so, in columns. On the other layer, do the same in rows. Via them together at every intersection. Now you have a ground that is very nearly as good as a plane, and far more useable, because both layers are still available to route all your power and signals. Move the ground tracks around a bit to accomodate your ICs by all means, but don't move them too far apart.

I've had some interesting comments from Umberto, Scott, and Olin, which suggest I haven't quite got my point across. I'll perhaps clarify what's above, while documenting my reasoning below.

I'm now retired, and after a lifetime mentoring junior engineers, one of the biggest problems they face is doing a poor design on a ground plane board. They seem to think that the ground plane 'will take care of all that isolation stuff', and they stop thinking. As a result, they run high currents past sensitive inputs, and otherwise fail to spot the effects of return currents.

In order to help them debug these boards, I remove the ground plane, and force them to consider all return currents as discrete flows in separate tracks. Once the culprit has been found, and the layout fixed, the ground can be restored.

On a 4 layer board, there's enough space to dedicate one to a solid ground. On a 2 layer board, there is a premium on routing space. That's why Manhattan, which gives you a systematic way to route any track from A to B, is so useful. If you dedicate one of your 2 layers to ground, any non-trivial layout will result in one, or two (or several, hey, it's only one more) tracks cutting the ground apart, wrecking its integrity.

With no ground plane, a gridded ground is the next best thing. It's flexible, you can increase the number of ground tracks where you need to. It's totally compatible with Manhattan routing. When you've finished the layout, by all means flood with ground copper. You'll end up with something that's better routed than a chopped-up ground plane, because you've been able to think about all those return currents you might have otherwise hoped would be OK.

Good board design is almost as much an art as a science. You can't teach artists to create, you can't teach engineers to 'feel' where currents are going to flow, until they 'get' it. Designing without a ground plane is one way to speed up the 'getting it' process.

All components are through hole

For this reason alone I would consider using a ground plane on the bottom so that components can be mounted without worrying about whether their bodies might make contact with ground copper.

Given that it is for a guitar effects box with potentially a lot of vibration and movement due to foot controlled buttons and controls I would also consider how signals are routed under compenents too in order to avoid the problem mentioned in my first paragraph.

But, why limit your self to two layers - get the signal tracks off the top layer entirely and use a 4 layer board. Cost wouldn't be much more and peace of mind is a good thing.

None of your proposed layouts are good. A better scheme than any you mention is to use SMD parts. This has a number of advantages:

For a two layer board, put the parts on the top. Use the top layer for as much of the interconnects as you can. Reserve the bottom layer as a ground plane, and use it only for short "jumpers" of other signals.

Keep these jumpers separated from each other so that ground currents can flow around each one individually. You want to minimize the maximum dimension of any hole in the ground plane, not the number of holes. Put another way, lots of little dispersed disruptions are better than a single big disruption.

Of course you still have to pay attention to routing the signal traces. Audio is all about keeping the signal to noise ratio high. Don't route amplified output traces near sensitive input traces, for example.

For more information, see this answer.

If you are wondering about ground planes, you have to forget through-hole! Having dedicated ground and power layers is all about maintaining low-impedance paths for all currents. Through-hole components have much additional impedance just from their bulky size and their wires.

If you want to stick to through-hole, I recommend a board that looks pretty much like the schematic. Use ground areas in both the middle of the top and the bottom layer. Use the long edges for V+ and V- paths. Create "copper fingers" from ground to V+/V- or vice versa to account for radial components. If your amplifier circuit needs three or four voltages, use the top layer for one voltage pair and the back layer for the other. 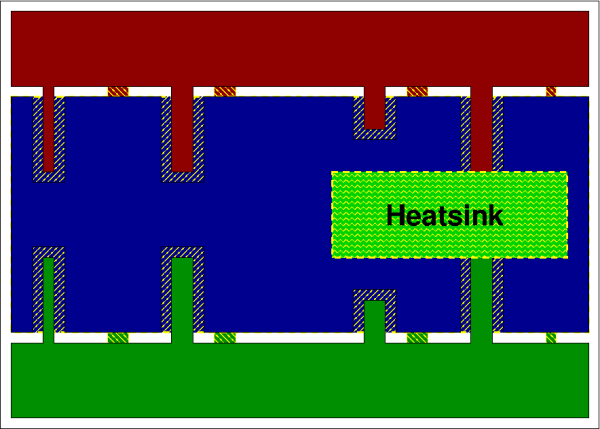 Please also remember, from AC view, V+, V- and GND are just the same. It's as important to have low impedance V+ and V- as GND.

The bottom ground fill is continous where the V+/V- fingers break the top one, and vice versa. Use the THT component's vias for the connection of the two GND fills. That way you give the through-holes a reason for existance. Use additional vias where required.

This is just the opposite from the board design a digital circuit needs. Now imagine the headaches of creating a mixed-signal board.

Not the answer you're looking for? Browse other questions tagged power-supply pcb audio ground or ask your own question.

9
Why is a broken ground plane not as effective as an unbroken one?