After dealing with software debouncing for a while, I find it takes a huge toll on the system, so I thought of initially making a hardware debouncer with one Schmitt trigger (74HC14), a capacitor, button and resistor as shown below from talkingelectronics.com:

But I read that the Schmitt trigger is half as nasty as a regular inverter when determining when to output a high or low, because it switches state at the 33% and 66% mark where as a normal inverter would switch closer to the 50% mark (but with the HC version it's probably more at 55%).

I was wondering, because the Schmitt trigger is six inverters in one package, would debouncing substantially improve with any button of my choice applied to the first input if I made six of the circuit on the right hand side with the same component values and connected all of them in series? (Example: output of the first circuit to the input of the second circuit where the capacitor and resistor meet.)

Using Schmitt triggers in series would not further reduce bounce. 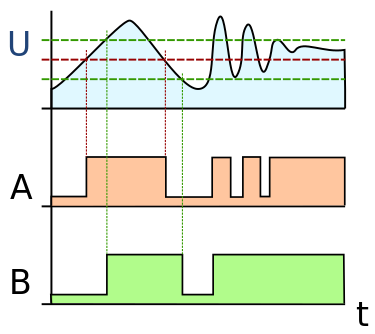 The input is (U). The red line is a 50% threshold, the output of which is seen as signal (A). It bounces each time the input crosses.

The green lines are something like 33% and 66%, as you had stated. But the output (B) only switches when the input (U) crosses from one green threshold to the other.

Most importantly, the output is either fully HIGH or LOW (digital). So if the output of a Schmitt trigger were fed into the input of another, there were be essentially no difference.

Take the filtered output from above (B), and think about how it would be seen by another Schmitt trigger:

Again, the output of the first would be either HIGH or LOW. So it would cross the thresholds at the same time, resulting in the same output as the input. There is nothing to debounce! If anything, I would expect it to create more noise, because you're introducing more components and thus more room for error.

Try playing around with this simulation I put together a while back: Schmitt Trigger Simulation - Non-Inverting Non-Symmetric 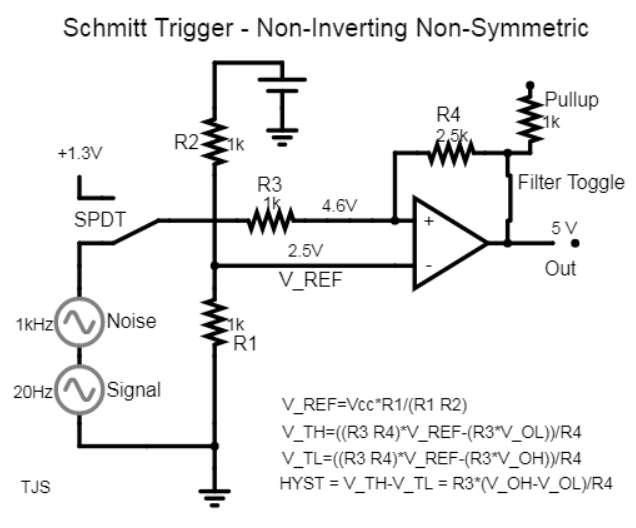 On a separate topic, debouncing in firmware shouldn't present much of a load. The usual way is to sample the switch state in a periodic interrupt you already have anyway. You declare the debounced state the current switch value when you've seen the switch in that state for N consecutive samples. I usually require the switch to be in the same state for 50 consecutive 1 ms interrupts for the new state to be considered valid. That usually takes a very small fraction of the overall processor cycles.

Not the answer you're looking for? Browse other questions tagged switches button schmitt-trigger debounce or ask your own question.