Why Does DC Load Draw Twice As Much AC Current Through Transformer?

I have designed the following circuit, comprised of 4 loads, 1 of 4.2ohms and 3 of 21ohms, drawing a total of 2.4Arms (1.5A, 300mA, 300mA and 300mA respectively) of AC current through the secondary of a transformer which outputs 6.3Vrms connected to the mains voltage (120Vrms) through the primary.

However, I have found myself in the need of feeding the last load with DC current instead of AC, so the solution is to add a rectifier and then connect the load to it to draw DC, naturally, adding a ripple filter capacitor and dropping resistor to adjust for 6.3VDC, taking into account the 1.1V drop of the bridge (datasheet).

I have a book on the subject and the author has also a website, and in both he mentions that whatever DC current the last load is drawing will count for twice as much AC current (so a load drawing 300mA DC counts for 600mA of AC) for the transformer, but he doesn’t explain why (I guess it’s obvious?).

Does this mean that the last load along with the rectifier can be substituted for a single load that draws AC current but with half the resistance? Why is this?

My thinking process is that all the rectifier is doing is re-directing the current so that it always flows in the same direction through the load, both in the positive and negative swings of the AC current before it, in my opinion, the transformer should not even know that there is a rectifier, from the transformer points of view there is always a fixed value load drawing current, in any polarity.

The DC current after the bridge is the same as the AC current before it, except for the polarity, I don’t understand the difference in current compared to the loads drawing AC though, 420mA peak vs 308mA peak, maybe the crossover distortion due to the bridge? 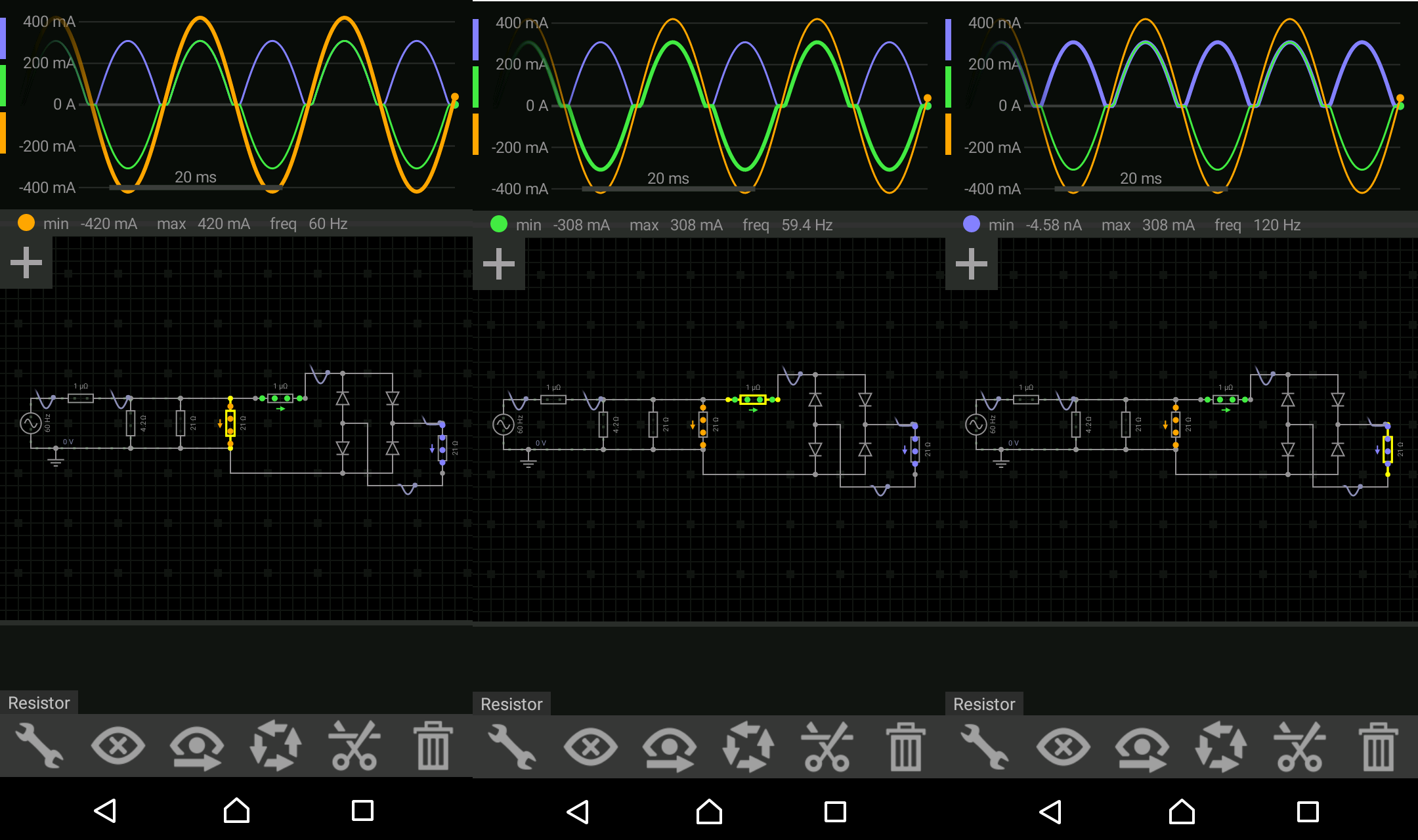 But still, the current drawn per cycle is the same, it’s just that after rectification the current flows only in one direction, so I don’t see where this extra double current would be going ¿?

If I add the capacitor the waveforms match what I have read, it turns the current drawn into brief spikes instead of more somewhat constant lobes, is this where the extra current is going? But even then, my analogy is that the shape of the curve is like a rope with a fixed length, you can re shape the rope from a sinewave to a square wave or into thin spikes but the length of the rope can’t change because that would mean the area below the curve would change meaning more or less current is being drawn, right?

The reason I’m focusing on current and not voltage is because I need to find a suitable fuse to add between the last AC load and the rectifier, as well as to find a suitable fuse for the primary, I’m aware of current inrush and I will add a thermistor to the circuit later on, but right now, I need to know the steady state current values. So, for the circuit with only AC loads that would mean 2.4A but how much for the circuit with the DC rectified load?

It's about the harmonics. When you are using the resistor (load) directly on the secondary of the transformer, you are using a nice sinusoidal current, but when you rectify the voltage, the nonlinearity of the diodes, combined with the capacitive load, add harmonics to the current and make its value larger. The "twice as much current" is not a rule, it can get very ugly, but it's usually less, depending on the elements.

Here's a quick test in LTspice:

V1 and R1 make your secondary and the 21\$\Omega\$ load. The rest is a rectifier and the load, plus a 1mF cap (random values). The currents are the red and green traces, while the powers are the black and blue, reading: 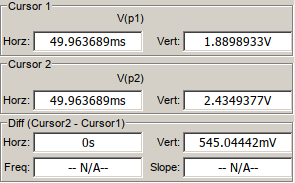 It's not quite twice as much but, the diodes are ideal and the voltage isn't properly rectified (could have used a bigger cap). Still, the ration goes closer to 1.3. In short, you pay for convenience, but there are solutions for mitigation: power factor correction circuits, active power filters, active rectifiers, filter traps, etc. 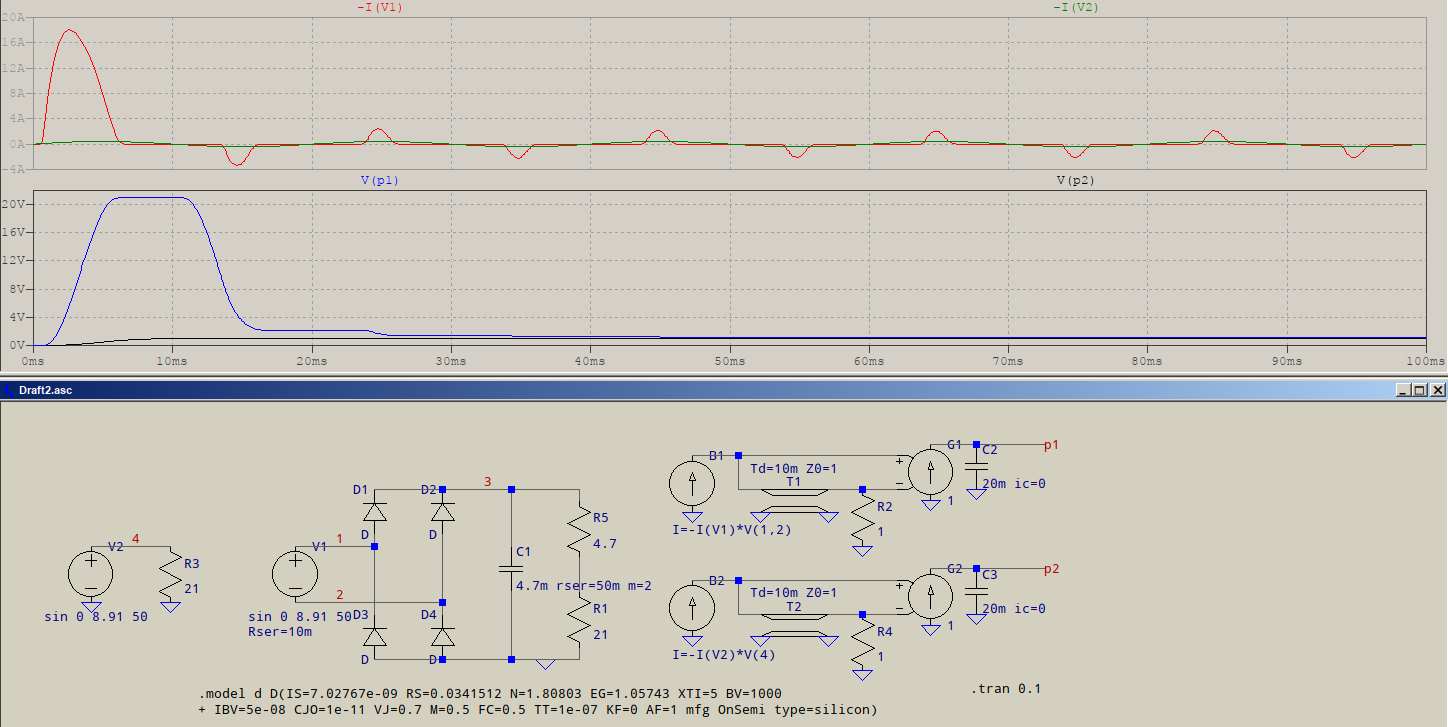 And here's an enlarged portion of the waveforms and their readings:

The current is smoothened out due to the ESR, the added load (4.7+21), the on resistance of the diodes, and not lastly, the internal resistance of the secondary (which will, no doubt, be much larger than the measily 50m\$\Omega\$ in the schematic). The powers are also closer, but the peaks of the current are still larger than the nice sinusoidal waveform, so you should account for those when choosing diodes (here the 4007 are used because I had a readily available .model). 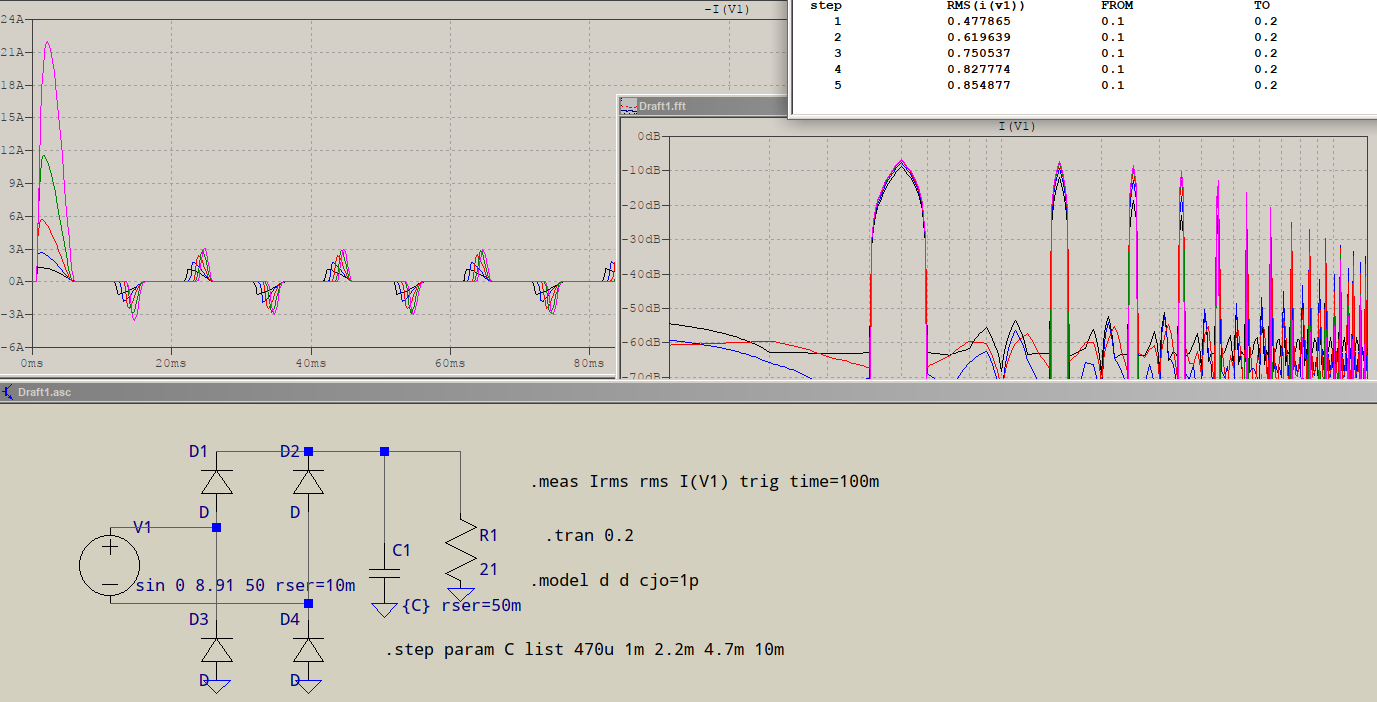 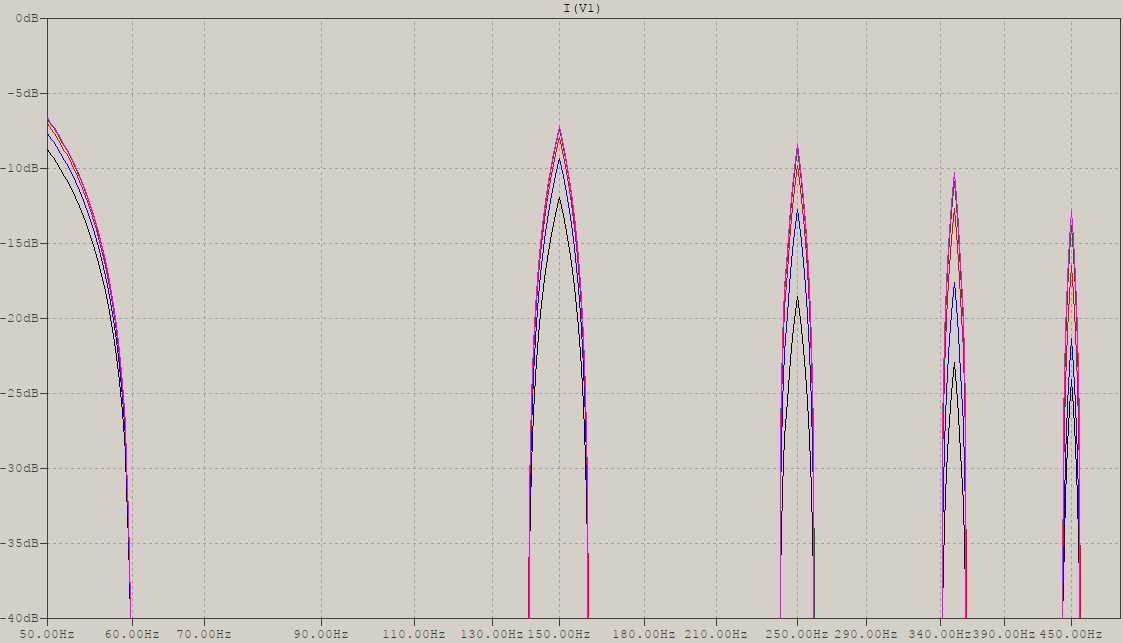 The trace's label is black, so the first .step'ed trace is black, going to blue, red, etc. The first step, as seen in the previous picture, is the 470\$\mu\$F, the last 10mF, thus the higher harmonics grow with the value of the capacitor, also increasing the value of the RMS current.

If only the capacitor was there, without the bridge, this would have been the result:

Note that the bridge is still there, but it's not connected (intended). The waveforms are that of the voltage and the current through the source. The FFT shows no harmonics -- ignore the noise, plotwinsize is not set, neither is a timestep imposed, yet clearly shows the fundamental, only.

If a bridge is added, without the capacitor, this is the result: 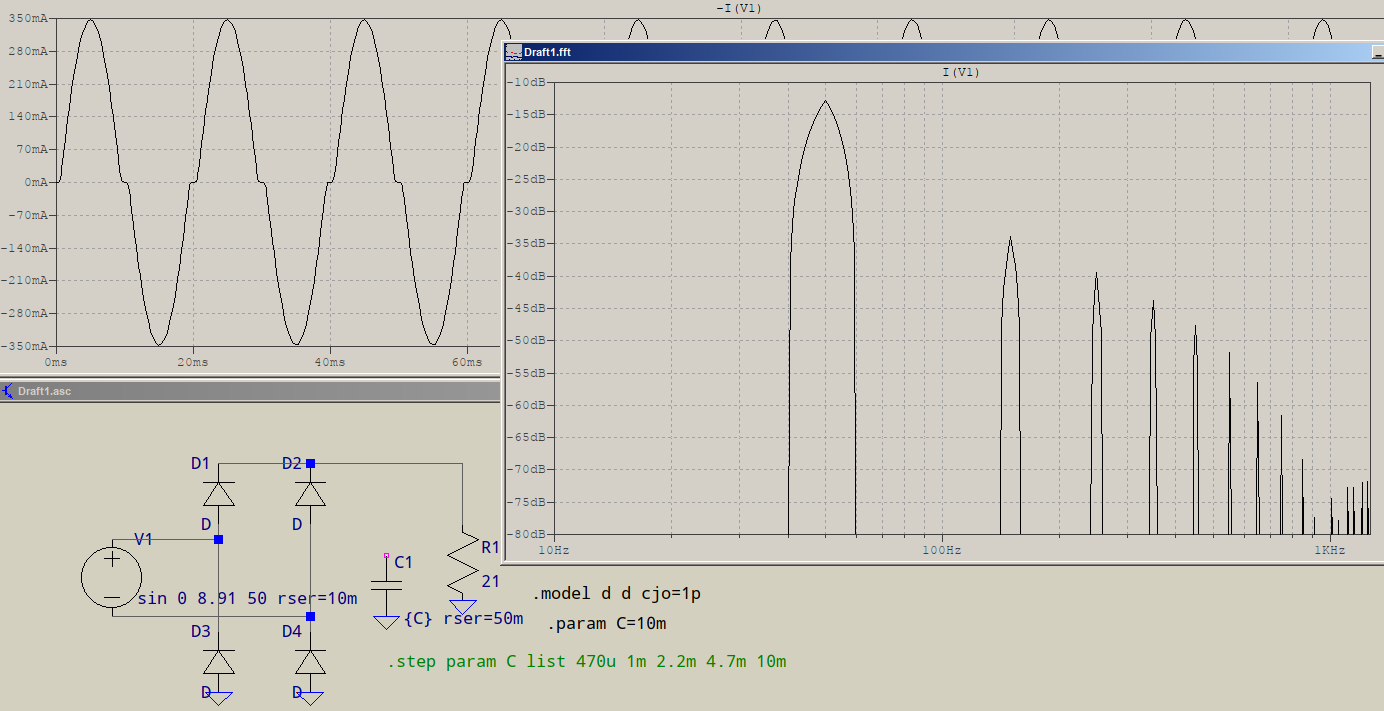 Notice the dead-zone due to the voltage drop. The power may be close to a pure resistive only, but the harmonics appeared due to the nonlinearity of the load.

Whe both the bridge and the capacitor are added with the load, you get what the first pictures show. The conclusion is clear and mentioned in the first lines of the answer: the nonlinearity of the diodes, combined with the capacitive load, add harmonics to the current and make its value larger (of the power).

But all this implies a fairly ideal case. Let's choose a quasi-real setup: an actual trafo and your loads: 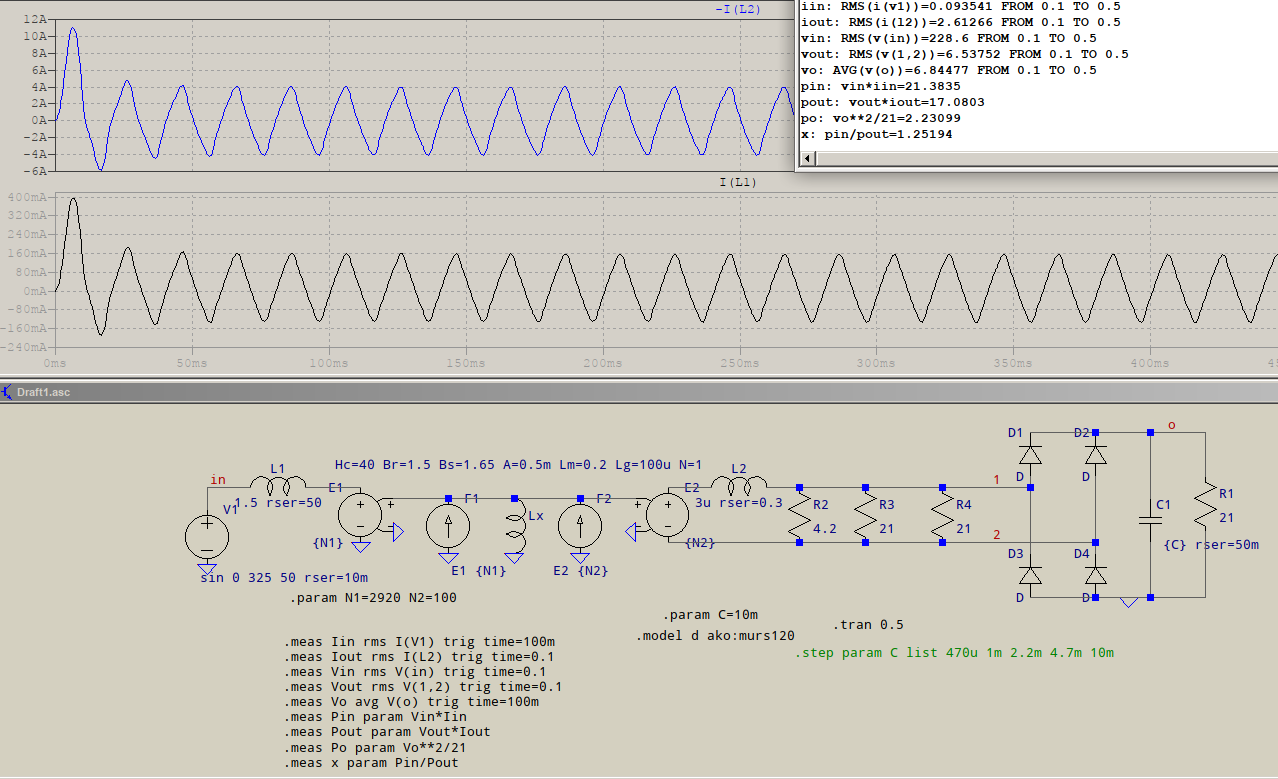 The transformer is half-guessed, with some exaggerated values in there (area, length of magnetic path, to accomodate the high number of turns, to avoid saturation), but there is some leakage and series resistance. You can clearly see that the current is nowhere near what is expected. But that may be because of the included AC loads, because the AC current drowns the charging capacitor. Still, the inverse of efficiency is 1.252 (slightly less than 80%).

Let's shift them all after the bridge, maybe this time, for sure, we'll see some effects? 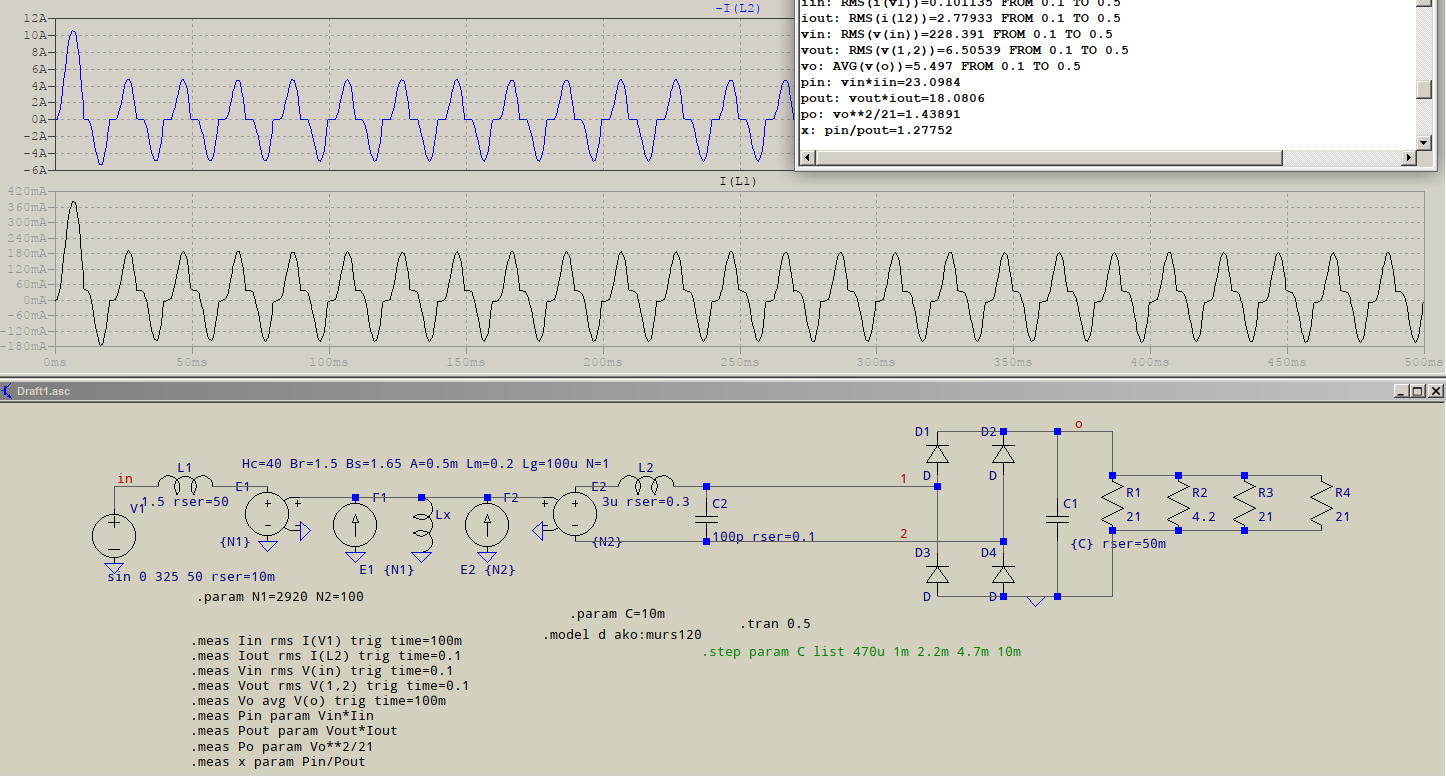 More like it... but the readings say 1.278, very close to 1.252, despite the apparent distorted current! And yet, this is closer to what you'll be really seeing if such a load were to be. In your case, it's more likely to be the previous one.

The conclusion is that the extra power comes from the distortion caused by harmonics, which are not only inherent to nonlinear elements, but cannot be separated from the meaning of a nonlinear load, no matter its type. You simply cannot talk about a nonlinear load and harmonics separately, an entire domain of electronics is based on this association. No matter the amount, higher harmonics cause a higher power consumption. If there were no harmonics, the ratio of powers would be done at fundamental level, only, and a phase delay would have been the only thing that happened -- the waveform would still be a sine, non-distorted, and \$\cos\phi\$ would be the only factor separating the powers.

Why Does DC Load Draw Twice As Much AC Current Through Transformer?

It doesn't, for average current. It does, or can do, for RMS current.

One of the specifications of the transformer is current that it can deliver without overheating.

A rectifier/capacitor DC load creates a much higher RMS load current on the transformer than does a nice resistive AC load, because it draws current in huge spikes, which cause excess I2R heating.

For the same heating in the transformer, you can only draw about half the current from a rectifier/capacitor load than you can a plain resistive load.

The bigger the capacitor, the smaller the droop, the shorter the interval. For a constant average DC current, that means the AC peak current has to increase.

Not the answer you're looking for? Browse other questions tagged ac transformer dc fuses bridge-rectifier or ask your own question.

1
How to estimate a linear power supply efficiency in LTspice?
1
How to calculate efficiency of a rectifier with a capacitor filter
0
Harmonics produced by LCC converters

3
Does Transformer heating add noise to a circuit?
1
Confusion with unregulated PSUs: RMS current, transformer rating
0
Transformer drawing 29x more current than it needs
1
AC Current Sensing Switch Using Current Transformer
2
Use RMS or peak value of current for transformer selection
0
Bridge rectifier with no load draws too much current
0
How does conduction angle through a bridge rectifier affects generator performance (vibrations, etc.)?
0
Power Supply Design w/Transformer - Not Enough Current
0
Is there a way to make an inverter that only draws power when a load is connected?