RLC without Source, finding the value of Resistance given I(0)

A capacitor of 1.58mF was charged by a battery of 12V and lies on the ground of an abandoned radio station. During a storm, an old telephone cable fell from a rack and one of its tip got in touch with one terminal of the capacitor. The telephone cable has a resistance of 14mΩ and an inductance of 15µH.

A wet racoon entered the building and accidentally stepped on the not connected terminal of the capacitor and the telephone table. Knowing that he suffered 18µs before being able to run away and that the current that made him squirm was of 100mA, what is the value of the resistance of the racoon? 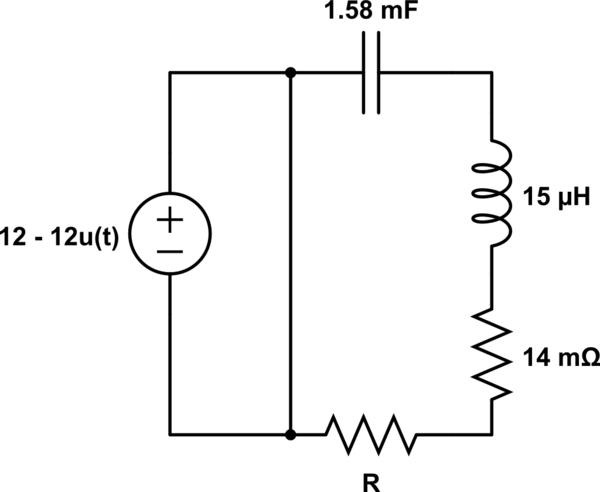 From this, I tried to solve the EDO bellow:

But I'm not able to go further, since it seems not possible to know its root without R, nor its coefficients (bellow is the equation I found manipulating the variables):

So I kept thinking, is this question even analytically possible?

100mA after 18us means, \$C\frac{dV}{dt} = 100mA\$ $$\implies dV \approx 1mV$$ The voltage of the capacitor has therefore lowered only very little in that period ( 12V to 11.999V). Hence the circuit maybe considered like a constant DC voltage source driving a RL circuit. The current equation is therefore -

NOT so easily solveable though.

The capacitor can be dismissed. The voltage drop at 18us is very tiny because of the huge value of the cap - so you can replace it with constant U0=12V in the model. So there's only a RL circuit left.

The solution to the differential equation of the RL circuit with starting voltage U0 is: I(t)=U0/R*(1-exp(-tR/L)).

I don't know how to solve this (analytically) for R, but asking wolfram alpha, it gives me a result of 120 Ohms. The racoons resistance is 119.986 Ohms.

Not the answer you're looking for? Browse other questions tagged capacitor circuit-analysis resistors dc calculus or ask your own question.

3
Solving a circuit with a directional loop
0
A question from Sedra/Smith Microelectronics
1
How do I replace a capacitor with a resistance?
0
Solving a source free series RLC circuit
4
How to calculate the currents of \$I_R\$,\$I_L\$ and \$I_C\$?
0
Finding the Thevenin resistance
4
finding the output resistance of bjt folded cascode
0
Maximum frequency of a high-pass filter
1
RLC Circuits at t=0 and infinity