Why is phase margin considered more important than gain margin in dc-dc converters?

Control theory text books say both gain margin and phase margin give information about relative stability. These quantities also give an idea about the corresponding closed loop system's transient response.

In dc-dc converters analysis, all the papers and books are talking only about phase margin(~45 deg) to keep the loop stable and to achieve a reasonably good transient response.

Why is gain margin not given much importance in dc-dc converter analysis?

For many DC-DC converters there is a "fairly" resonant low pass filter involved at the output and, it changes its phase angle "fairly" rapidly from 0 degrees to 180 degrees over a short part of the spectrum. Here's the general idea using L=100 uH and C=100 uF with an effective inductor series resistance of 0.3 ohms: - 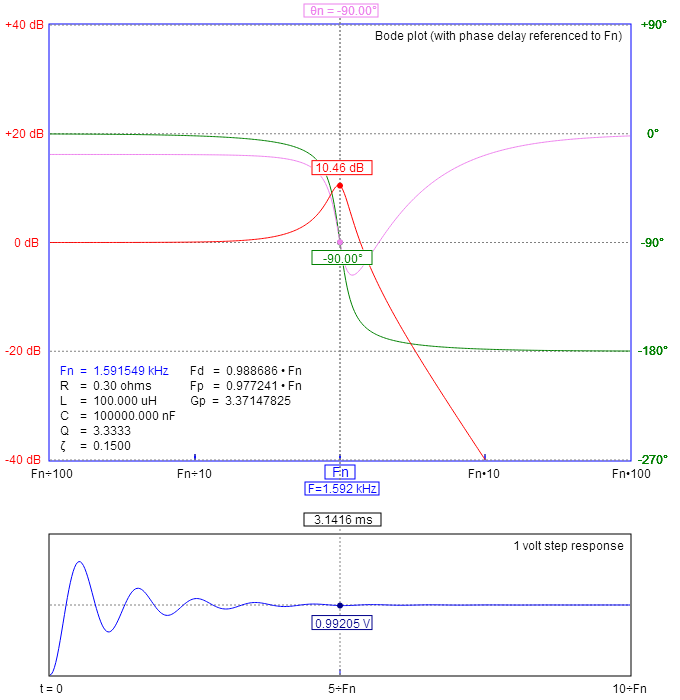 So in this area it's possible to experience instability (due to the feedback system that tries to maintain Vout at a constant level). The phase angle changes 180 degrees so it can convert negative feedback into a borderline positive feedback. The solution is to apply a phase lead circuit "inside the loop" that prevents the phase angle reaching close to 180 degrees while the amplitude is still greater than unity.

This lifts the baseline phase angle (approached at higher frequencies) to something much less (and more stable) than 180 degrees. Note that the silicon amplifier used in the feedback loop will fall to unity gain usually many times higher than the cross-over point of the filter. That unity gain point is where the gain-margin is defined and so it should be largely unrelated to the cross-over point of the LC network.

So immediately, the preferred "talk" is about phase margin and countering what the LC circuit does to the phase angle. The load on the output might be fairly light and this will raise the height of the resonant peak and thus the point at which gain passes through unity will shift to a higher frequency but, for the change in phase angle, this will occur close to Fn and it will be this part of the spectrum that gives the biggest headache to a designer.

In other words we know what the worst case scenario is - the phase rapidly changes hence, we talk about using a phase compensator to stop that phase angle becoming 180 degrees.

This type of application lends itself for discussing phase margin rather than gain margin.

In general, though there are exceptions, caveats, and subtleties, phase margin tells you more about what the response of the system will look like. For example how much overshoot and ringing you can expect due to load transients. It can also tell you if there's more performance to be had by increasing your loop bandwidth (because the phase margin is high).

Typically many designers use 45 degrees as the absolute minimum acceptable phase margin over component tolerances, etc. and 60 as a typical target.

Gain margin is important as well, but it doesn't give as much information about the response of the system. It tells you how much variation in system gain you can put up with before the system becomes unstable. A typical target might be 12dB.

A typical design approach is to use a model to design the compensation targeting a certain phase margin. Then simulate maybe using Monte-Carlo techniques, checking to be sure you meet your minimum phase margin and a reasonable gain margin. If either is off iterate the design. Finally measure the response in the lab to be sure it correlates.

In general, for all systems with feedback the phase margin is more important (more critical) than the gain margin. The explanation is relatively simple: The phase margin (resp. gain margin) gives you the additional (unwanted) phase shift (resp. additional gain) which will bring the closed-loop into the region of instability.

And the probability that anywhere within the feedback loop an additional (hidden) phase shift would occur (e.g. due to unknown capacitive effects) is much larger than the chance of any unwanted gain enhancement. Hence, the phase margin is a much more critical stability indicator than the gain margin.

Not the answer you're looking for? Browse other questions tagged switch-mode-power-supply dc-dc-converter control-system stability or ask your own question.