Why does current lag 90 degrees behind the voltage when an inductor is present?

When we supply a voltage to an inductor then the phase difference between voltage and current is 90 degrees (ideally.)

Mathematically, I have seen how it becomes 90 degrees but can someone help me to understand it in an intuitive way?

This behavior is described by Len'z Law.

\$\displaystyle EMF=-\frac{\partial \Phi_B}{\partial t}\$, which happens to be the negative of Faraday's Law of Induction. 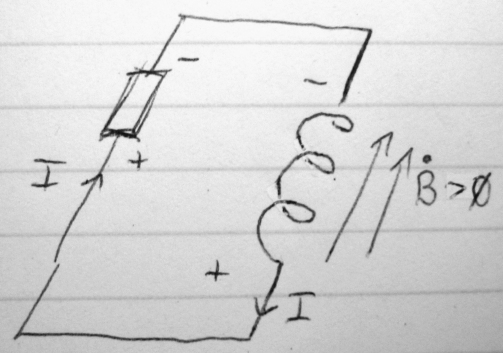 I didn't draw this, I just found it on Wikipedia. But as you can see, the magnetic field \$B\$ is being pushed back.

If you're asking why it's 90 degrees rather than something else like 45 degrees, then again, it's because of the sine and cosine functions.

So why is there a sine function? Because when you talk about the voltage and current, there's a derivative relationship.

Typical AC voltage is described by a cosine sinusoidal function.

If you have a volt meter, a coil of wire and a magnet and statically place the magnet close to the coil you do not get any DC voltage shown on the voltmeter. However, if you move the magnet around you get a voltage induced in the coil whose magnitude is proportional to the change in magnetic flux experienced by the coil. In other words: -

But you can replace the magnet with a current source. If you apply a ramping waveform of current to the coil it produces a ramping magnetic flux and across the terminals of the inductor the voltage will be constant. That constant voltage is proportional to the rate of change of flux.

You might be able to see that this is mathematical differentiation so, applying a sinusoidal current through the coil (from the current source) produces a voltage that is the differential of the sine wave across the terminals. That means the voltage is a cosine and thus, in AC analysis the voltage and current are displaced by 90 degrees.

An inductor can be visualized as an object having inertia, with force being applied through a spring. The force (voltage) compresses the spring, but the object moves with some delay (phase shift). If the force is then reversed, the object will slow down and then reverse direction as the spring alternately stretches and compresses. The action is something like a yo-yo, or a paddle ball on an elastic cord. When the paddle or the hand move up and down in a smooth motion, the object will follow, but with a delay that is analogous to a phase shift.

15
Why, in a passive circuit with a sinusoidal input, do all voltages and currents have the same sinusoidal behavior as the input?

2
Phase Angles in Series/Parallel networks
2
Why does current flow in circuit when dc voltage is applied to inductor?
0
How is the phase of the applied voltage related to the phase of the induced emf in an inductor?
0
Finding the frequencies for a given phase difference between supply voltage and supply current
13
If a circuit only has a current source and no voltage source where does the voltage come from to supply the circuit?
0
Confusion Between Dual Capacitor/Inductor Circuits
3
How does the resistance-capacitance oscillator shift voltage by 180 degrees?
0
How do you find the phase lag of the current in this FM demodulation "discriminator" circuit?
1
Why does voltage drop in a series circuit but current stays the same?
0
Voltage across the inductor