What is the impedance of this Common Emitter transistor

I see this question on EE but the other question is slightly different of what I am asking. 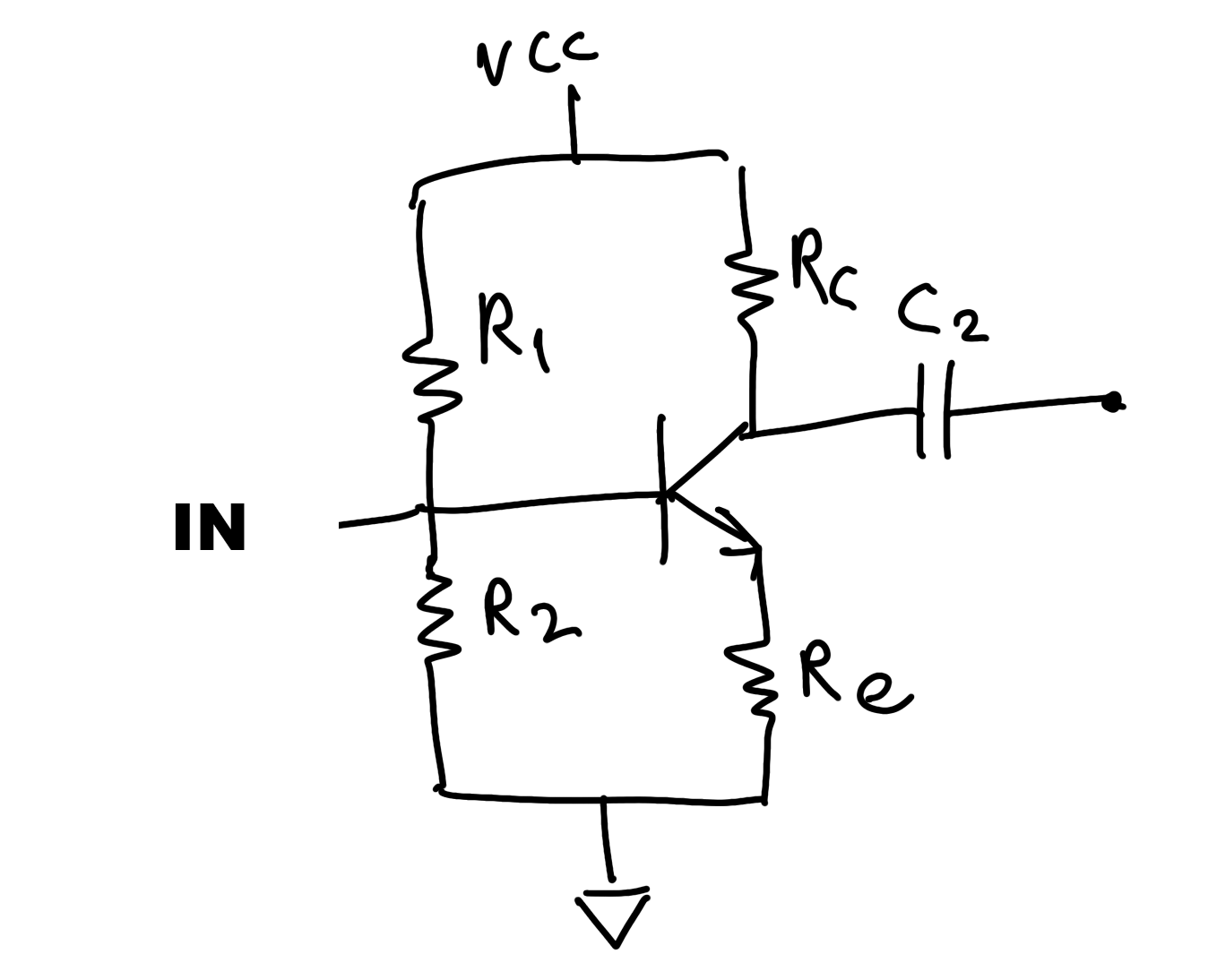 Suppose I will add a capacitor to the input but I need to calculate the input impedance of the circuit on the picture.

Suppose the impedance was fixed for all frequencies. If I understand correctly, if the impedance could be measured by a multimeter it would be the "resistance" measured from the point IN to ground, right?

If this is true, it would be R2 in parallel with the sum of rEE and Re, or in other words

Then, if that transistor is biased at 1mA,

but I have found one author saying Rin is in fact equal to βrEE and does not even include Re.

... and now I have found a post on EE showing a very complex formula that takes into consideration R1, R2, Re and other components.

What is really the impedance of such circuit?

amplifier impedance common-emitter
share|improve this question
asked May 4 '18 at 19:20

I think you've sufficiently gathered up the idea that this isn't a multimeter question, but one of what things look like from the point of view of small signals that attempt to wiggle the base of the BJT through a capacitor.

It's one thing to be just told an equation. It's another to understand why. I'll try to add the why-parts here.

The input capacitor is said to block DC. But another way to look at it is to simply imagine that when a circuit powers up, it doesn't take too long for the input capacitor to develop some voltage across it. If there is no signal, this voltage is fixed by the DC operating point of the circuit before it and the circuit after it.

Now, when an AC wiggle occurs from the input side of the capacitor, the voltage across the capacitor acts (if designed correctly) very much like a \$5\:\text{V}\$ battery. So the base of the BJT simply moves up and down in concert, separated only by this voltage difference. In short, the capacitor allows the signal source to have a different DC biasing point than the BJT biasing point of this circuit by simply charging up to the difference between them. It could be a big difference or a small difference. It could be polarized one way or polarized the other way. It doesn't matter. It simply charges up.

(Of course, hopefully, you know which end is "up" if you control both circuits. Otherwise, if you don't know the DC bias of the input source relative to the DC bias of your BJT circuit, you may need to use a non-polarized capacitor.)

Now, it's true that there will be some loading on this input capacitor due to the BJT circuit. And this will cause the (\$5\:\text{V}\$?) voltage difference across the input capacitor to start to change. But the whole idea here is to make the capacitor large enough so that the voltage difference doesn't change much over very short periods and, in all cases, will on-average remain where it started over very long periods.

Also, the input capacitor is a frequency-dependent device. It's impedance varies with frequency. The total input resistance of the BJT circuit acts like a voltage divider in concert with the input capacitor (and any other input source impedances, too.) Since the input capacitor's impedance varies widely over the range of desired frequencies you want to support (let's say, from \$20\:\text{Hz}\$ to \$20\:\text{kHz}\$, or three orders of magnitude), you want the capacitor's impedance, which varies over a range of 1:1000 here, to always be low compared to the CE BJT stage's input impedance. If it isn't always low by comparison, then you will have a significant frequency-dependent variation in the loss of signal prior to being amplified by the BJT circuit. This means a significantly variable gain vs frequency. That may, or may not, be important to you. If there is global negative feedback taking place, this may be acceptable to you. But as a stand-alone concept, frequency-dependent gain is not so good. So you want the impedance of the capacitor to be relatively small, in the worst case of your lowest frequency of interest, when compared to the input impedance of the BJT amplifier circuit. A figure of 10% is okay, as this just means 10%...0.01% vs the input impedance of the amplifier. So the divider will provide a frequency-dependent signal of from 90% to 100% at the input and that is an easily acceptable variation.

Enough said about the input capacitor.

For the impedance seen by the capacitor as a load caused by the BJT amplifier circuit, you can easily just imagine the fact that \$R_1\$ has one end nailed to a voltage source and that \$R_2\$ also has one end nailed to a different voltage source (ground), so the input capacitor has to treat those two resistors as if they were in parallel. They both have to be "driven" and they are both tied on their other ends to rock-solid voltages. So they are "parallel" in every meaningful way.

Plus, there is one more detail. The dynamic resistance of the Ebers-Moll equation for the active-mode BJT (assuming the emission coefficient is 1, as it usually is.)

The dynamic resistance is found by:

Mapped to the emitter, it is:

That value of \$r_e\$ is added to \$R_E\$ before being mapped backwards to the base by using \$\beta+1\$, so the total impedance (discounting other unmentioned details) seen at the base node is:

Above, when computing \$r_e\$, \$I_\text{E}\$ is often taken as the quiescent value. It will vary somewhat while the BJT amplifier operates and the collector and emitter currents change. So the actual input impedance will also vary a bit. But if \$r_e\ll R_\text{E}\$ then the impedance will be relatively stable. And this would also mean we can ignore it, too, if true. So the impedance is often based on the idea that \$R_\text{E}\gg r_e \$ so that the expression above can be simplified to:

A factor of 10 or more would be sufficient to qualify, so:

The emitter is a voltage follower, which means Vbase is "across" Re. But because of current gain we only need 1/HFE the current to make that happen, so R must be Re*HFE

Not the answer you're looking for? Browse other questions tagged amplifier impedance common-emitter or ask your own question.

10
Input impedance of inverting amplifier clarification
11
Common Emitter not amplifying
3
Inconsistency in the calculation of the gain of an emitter follower
1
Need a little clarification about this BJT common emitter circuit
11
Is the input impedance of an operational amplifier (op amp) infinite or zero?
1
Effect of emitter capacitor in common-emitter amplifier
0
Calculation of common emitter output impedance with output resistance
2
How does this impedance matching circuit work? How to simulate it correctly in SPICE?
3
Class A Amplifier Design: Emitter Resistance Voltage Drop