As you know SMD LED Strips can get damn hot and I'm looking at easy ways to reduce the temperature so that the LEDS remain bright for longer. It is my understanding that your typical LED strip will look something like this: 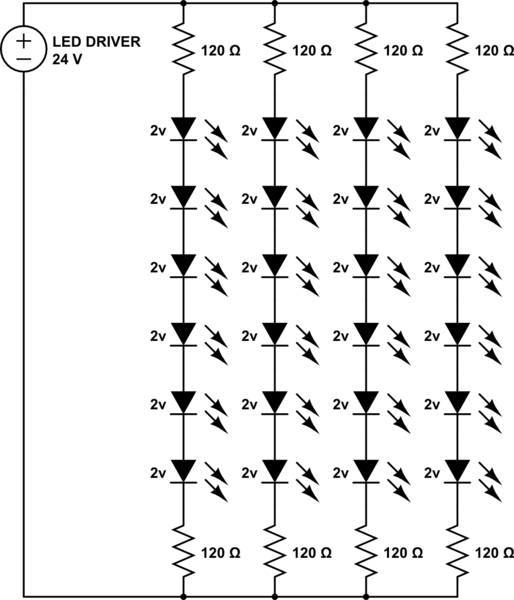 As you can see the input is 24v and the resistors half that to 12v and then that is shared across 6 LEDS, but obviously on a roll of 5m or even 10m this is repeated many more times than displayed.

On a large roll I can imagine that the high demand of current is going to heat up the copper within the LED strip. Which brings me to my question: 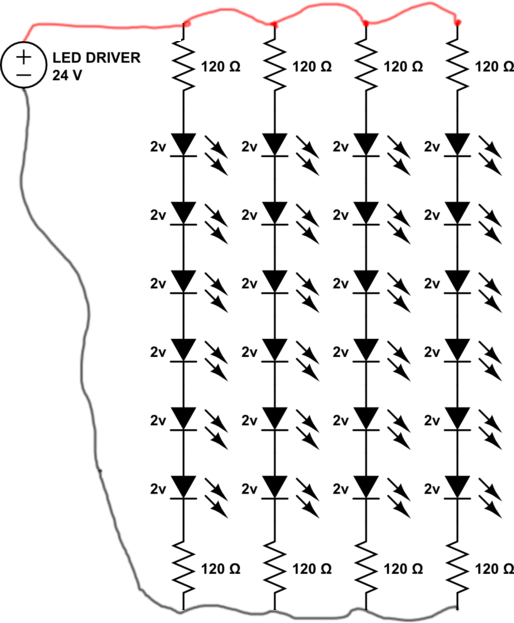 Yes this can help if done right. Part of the problem with led strips is that a large roll of flexible printed circuit is used to carry more current than it really should be. This results in a larger voltage droop as you go down the line, ie higher resistance and higher wasted energy, which also has the side effect of making one end dimmer. FPC is fairly high resistance depending on it's cross section. Cheap led strips will cheap out on the copper.

But to be honest the heat from the copper is unlikely to affect the leds too much, and with current regulation, like the resistors, which will drop more voltage as the current increases, it balances out.

Cutting the roll into smaller pieces is typically done to prevent the color dimming, by letting the FPC carry less current and the added wire carry the rest. Typically you inject power every 2.5 or 5 meters. So a 10m section would get power injected at 0, 2.5, 5, 7.5, 10 meters. This would be like what you drew in the second picture.

If you really want to lower the temperature, to increase the led life, then you need to either reduce the input voltage, or use a driver to PWM the strip to 80% or lower. This will increase the life of the leds considerably.

Does slicing the LEDS into smaller strips and then wiring them together using low AWG cable reduce the heat? (see example below)

No, they will run hotter on average.

Consider two 5mm wide traces, 2oz copper thickness, this is 5 mOhms per 10cm. Current is 5 amps in each trace at the end of the 5m strip where the wires are connected. This is 0.25W dissipated in the first 100mm segment. The strip is rated 24W/m so in the same segment, 2.4W will be used by LEDs and resistors.

So, while the voltage drop in copper traces does dissipate power, the vast majority of the dissipation occurs in resistors and LEDs.

If you power a long strip from only one end, it will be dimmer at the other end. Adding thick wires and powering the strip in several places will reduce voltage drop in traces. If you connect the wires only in one place, doing it in the middle will result in lower voltage drop. This is good, as it will result in higher and more uniform brightness...

Also the bit of LED strip which was previously near the power connector, and whose traces carried all the current for the entire strip, will run slightly cooler due to less dissipation in traces.

However, the LEDs at the other end, which were previously dimmed due to voltage drop, will now have full voltage, so they will dissipate more power and run hotter.

The only solution is to use a suitable heat sink.

For a 26 W/m strip, an aluminium profile is adequate. Make sure you check the specs, also it needs enough airflow. If you mount it recessed and it can't get airflow, it will overheat. You can ask another question on how to choose the correct profile, make sure you provide all the info, how it will be mounted, etc.

Note you don't need to cut the strip. You can just run wires in parallel and connect them to the strip at regular intervals.

This is common. Manufacturers do a single flex pcb layout for white LEDs which make up most of the production, and then when you want color, they use the same. This means the efficiency of red LED strip is terrible, as red LEDs have much lower Vf than white LEDs, so a lot more voltage is burned uselessly in resistors. It's the same problem for green.

If you're really interested in efficiency, you could replace the resistors with lower values and use a lower supply voltage to keep the same LED current.

Each leg of your circuit will carry roughly the same amount of current (assuming that over time your power wire are big enough to not drop any voltage over their length). Therefore, adding more strips in parallel will not make them heat up more or less. However, the total current will increase with each leg.

In that example of yours, each leg will require 50 mA to operate. In a nutshell, the copper on the led strip shouldn't heat that much, but there is a chance that the main power wires could heat up if they are not big enough. This is often the case on serie chained led strips. However, the voltage drop will usually negate that effect and naturally reduce the light output.

Edit after re-reading: cuting subsections yourself will prevent the overheat of the copper within the LED strip since you will be able to dimension your AWG properly for your demand.

The resistors are dissipating nearly 5 watts, and the LED's another 2 watts. It's really unlikely that power dissipation in the copper is your issue. Your plan won't help.

Not the answer you're looking for? Browse other questions tagged current temperature led-strip or ask your own question.

1
Powering and controlling multiple 12V LED strips with Arduino LilyPad USB
2
Am I having a power supply issue with my LED lights strips in series, or have I done somethine else wrong?
0
multiplex numerous strips of WS2812
2
What gauge wire for 24V, 72W, 8m extension RGBW?
0
24V LED Strip Circuit - Switch, Breaker & Wiring Size Requirement
1
Help with powering LED strips from a LED TV
5
LED strip hot / drawing more current than expected
1
How to wire LED strips into my display cabinet?
0
Constant current or constant voltage supply? - Setting up LED strips with both series and parallel LEDs on the strips themselves