I am trying to come up with simplest solution to reduce 0~2.5V DAC output to 0.09V swing and shift it into -19.34~-19.25V range for controlling current limit of OPA548 op-amp within 0~100mA. There is an example circuit in OPA548 datasheet but it uses single power source and full current range, so all they had to do is buffer DAC output and keep it above ground.

After researching dozens of examples on the web (like these: voltage shift, another one) I ended up with two options:

Technically, I think the latter one is also attenuator, since individual input gains are 0.8 and 0.036.

What bothers me is that about 80% posts on the web claim unequivocally that configurations with gain < 1 are unstable. The rest are equally adamant that this is wrong (see unstable op-amps). It should be possible to "shrink" DAC output with resistor divider enough to use gain > 1, but I always prefer simplest possible solutions.

My question(s): Will these work and if yes than which one is better? Are there other options available?

Posted alternative idea that addresses the concerns raised in answers and comments.

One important other option includes more careful reading of the application section.

In section 8, on page 12 of the datasheet (as you can see in the image), it says the following:

Later, on page 18, figure 30 it shows even more blatantly how it works: 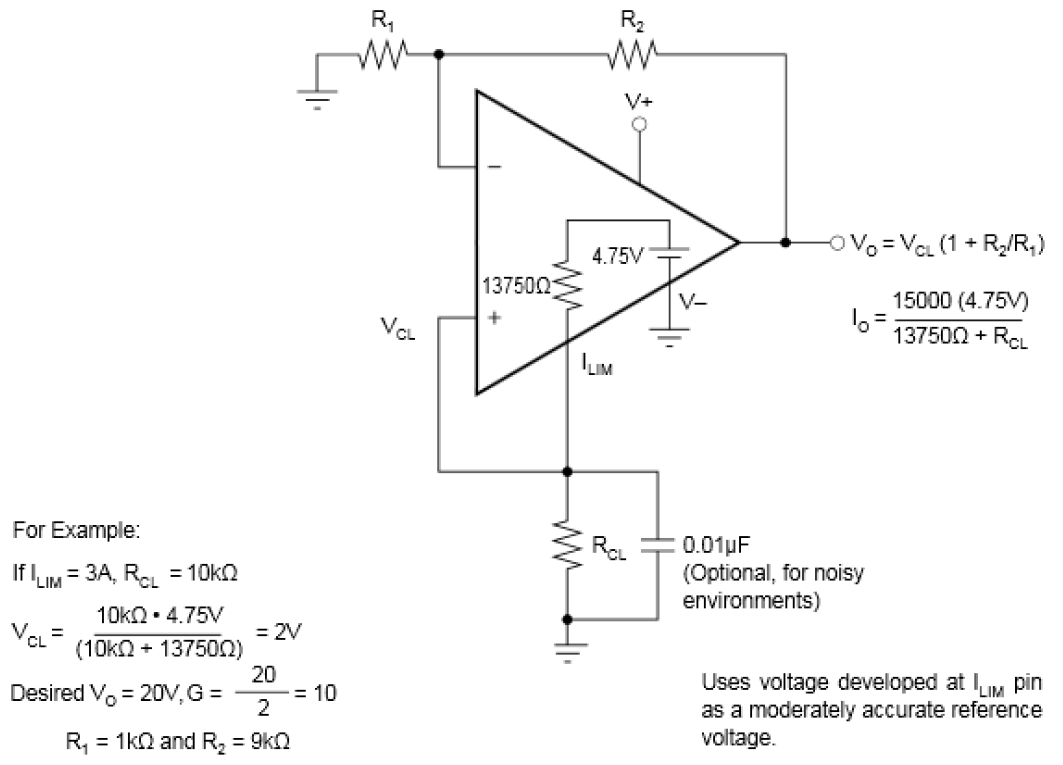 Which means, simply, that if you drive a voltage on the Ilim pin, you use the internal resistor to generate the 0 μA to 330 μA current, 4.75V across 13500 Ohm creating 350 μA. That's probably to give some margin, with some internal structure limiting to about 5A anyway.

So, what you want to do is just draw between 0 μA and 7 μA from that limit pin. Which is on the high-end of the internal voltage source, so you can very, very simply create a current drain with an NPN or N-MOS transistor, which gets driven by a much higher level voltage. In fact, given sufficiently accurate components you would need no Op-Amps for the purpose at all.

The only reason they cannot do the same trick, is because they want the full current range and a current drain would take up one or two volts, not allowing anything above 2 A to 3 A.

This set-up might already be accurate enough for you, though you specify nothing to make me know either way: 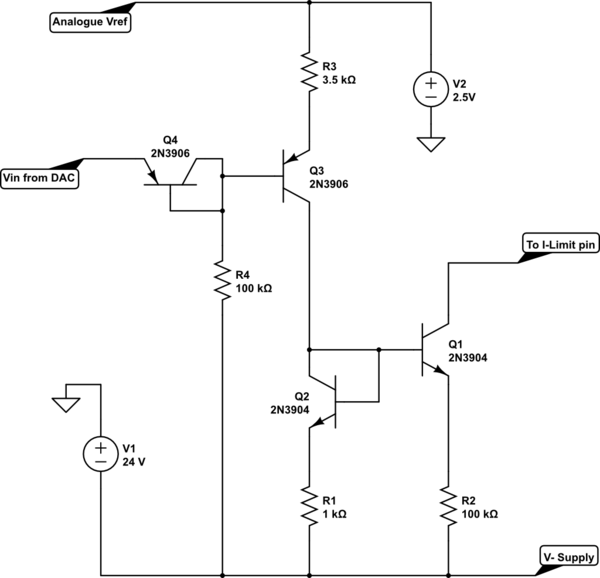 Q4 and Q2 become diodes that match the base-emitter voltage drop in Q3 and Q2 respectively. Though, of course, they have different junction currents, thus their voltage won't be an absolutely exact match, but it should be close enough. Using these transistors in μA range collector currents may not be super linear, there may be more accurate models. Of course similar tricks can be done with Op-Amps, but those are more trivial and easy to find elsewhere.

When you apply 0V at the DAC node, the diode drop in Q4 creates a negative voltage on the base of Q3, which then tries to force approximately 0V at its emitter. This puts 2.5V across R3. This drains 700 μA through it (actually 714 μA, but that looks too much like a traumatic 741), which makes its way (give or take some leakage and such) to R1, which creates 700 mV across R1.

Because Q2 acts as a diode again, the base-emitter drop of Q1 is compensated, and the same voltage falls across R1 (again, give or take some leakage and non-linearities). 700 mV across 100 kOhm equals 7 μA, which must come (mostly) from the collector, leads to a limit of a bit above 100mA. Whatever voltage needs to be on the I-LIM pin for that to happen will be there, through the magic of how transistors work. Given that that voltage is at least a few volt above the V- supply, so it has some room to work in.

It just occurred to me after all this writing, that if you just tie what I labelled "In from DAC" to ground, that creates a virtual ground-point from which current flows downwards into the NPN group (Q1/Q2). If you then connect the DAC to the top of the resistor a positive voltage creates a current, no voltage creates no current. Both removing the need for having the 2.5 Vref externally available and making it non-inverted current control.

Of course, you can also manipulate the maximum range by just inserting an extra resistor in the voltage-control signal. If you apply V- to the I-LIM pin, you create 330 μA drain. If you want that to be much, much less, you just need a much, much bigger resistor than the one that's inside. To be precise, you'd need a total resistance (external + internal) of 4.75V / 7 &mu;A =~ 678 kOhm. Clearly that's a pretty beefy resistance to combine with what is meant to be a piece of power-electronics.

Which ever way you go, I strongly feel manipulating the current you drain from the pin is a much more sensible way than trying to make your voltage signal infinitesimal compared to the supply ranges.

All that said...
Have you tried to actually look for a part or solution that isn't over-dimensioned for your use by one and a half order of magnitude? When you go to orders of magnitude too large, these are the kinds of problems you often run into.

If you are ever worried about unity-gain stability in a prototype project, what you can do is add an extra 0 Ohm resistor to the output, before it feeds back to the negative input terminal and an open component from behind that resistor to ground. If you then get problems in unity or sub-unity this allows you to add bandwidth reduction or compensation without having to cut up your board too much.