How do zener diodes create a stable voltage output even then? How do diodes have a constant voltage drop? I don't understand how to input a specific current into the zener diode without having to input a super specific voltage since voltage is just the different charge density that drives current

I already mentioned the "dam analogy" in comments, so I'll avoid it here. I also won't re-use what's already been written here. I'll start fresh and be a little more direct (electronic-minded) about it.

There's a nice zener image I found at a page called the Working principle of Zener Diode: 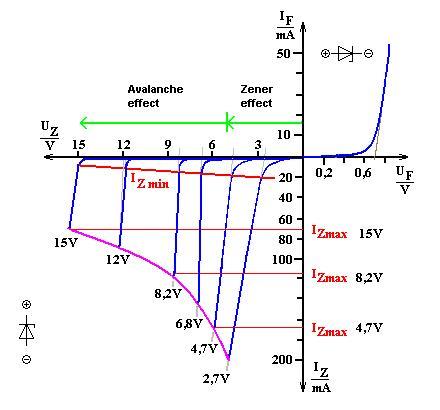 It's jazzy-looking, but there is a lot of information contained in it, too. So let's look at it in pieces.

The upper right quadrant is the area where a zener is operating like a normal diode, where it is forward-biased. In that quadrant, you can see that the forward current, \$I_\text{F}\$, stays very low until the usual minimum *silicon diode voltage" of about \$600\:\text{mV}\$ is reached. Then the current shoots upward like a rocket. Since a zener diode isn't supposed to be used like a normal diode, let's ignore this quadrant. It's not terribly interesting, anyway.

It's the lower left-hand corner where all the action happens. In this particular chart, the author took some time to provide a variety of curves. This is because there are several different zener voltages and these are due to a couple of different effects: avalanche and zener. The technical folks can worry more about the differences there, but you don't really need to. If I want to say anything here about all those curves, I'd want you to notice just how "vertical" the line is for the \$6.8\:\text{V}\$ zener. It's almost exactly vertical.

What this means is that for this particular zener, when the voltage is oppositely arranged (reverse-biased, which is why we are on the LEFT side of the chart) and before it reaches about \$6.8\:\text{V}\$, there's very little "leakage current" through it. The curve stays very close to \$I_\text{F}=0\:\text{mA}\$.

But as you can see, once the voltage exceeds this magic value, the current magnitude gets very much larger very quickly. This is the nature of that vertical line portion of the curve. If the reverse-biased voltage is \$6.8\:\text{V}\$, the current might be growing beyond \$20\:\text{mA}\$ (just by glancing at that curve.) And if the reverse-biased voltage is \$7\:\text{V}\$? Well, that just reaches out to the end of the curve near about \$140\:\text{mA}\$! Just a few tenths of a volt makes that much difference!

Let's see what happens when we put a resistor in series here. Something like this: 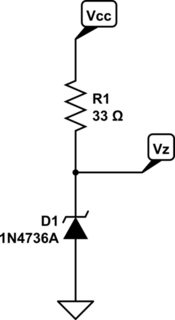 So what actually happens? Well, we actually start with a fresh \$9\:\text{V}\$ battery. That's more than the planned figure, so it allows us to test out what happens when plans go awry. Let's use that higher starting value as the actual voltage to start. When the circuit is just connected up, with no current yet in the zener diode and therefore no current in \$R_1\$ and therefore no voltage drop across \$R_1\$, the entire \$9\:\text{V}\$ would seem to be applied to the zener. This would immediately suggest currents in the zener diode that are simply off the chart! But as the current in the zener diode rises (very rapidly) in magnitude (goes downward on that chart) there is also a growing voltage drop across \$R_1\$. This lessens the voltage at the zener.

However, we supposedly know that the datasheet tells is that it is \$6.8\:\text{V}\$ with \$37\:\text{mA}\$. Our current is a lot higher, so the voltage in the zener diode should (according to the curve) also be a little higher.

I think you can see that we could go back and forth for a while, trying to work this out. There are math equations we could try. But it's time for a new idea, I think.

At this point, it's time to introduce a new concept. This is called "adding a load line" to the curve. The "load line" is a little tricky to get at first. But once you understand it, it isn't hard to remember and apply. So let's give it a shot. 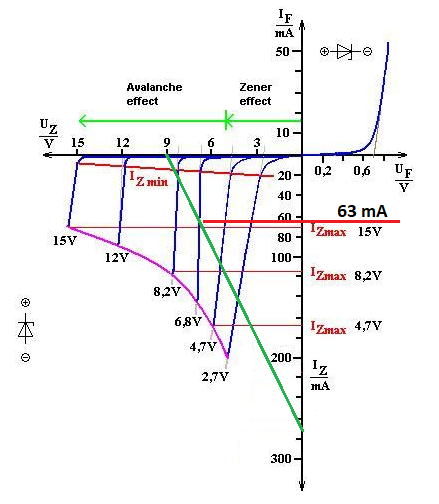 See how much easier it is with the load line added?? We don't have to sit around with a piece of paper rolling numbers back and forth a lot. 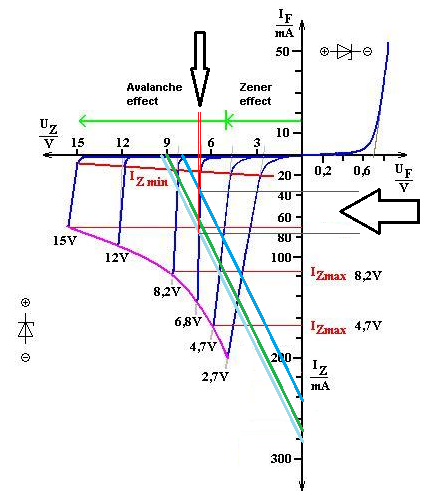 Now. Notice how small the span is in voltage (it's almost invisibly small) for quite a range of current variation?? (The arrows point the way!)

So this means that the zener will do a pretty good job of holding close to its rated voltage. Even when the supply voltage is changing a lot.

Hopefully, this gets across a few useful ideas. The load line is one good idea. But another is just realizing that the zener diode "floods" rapidly when the voltage exceeds its rated value. And this dramatic flooding behavior is what keeps the voltage very tightly controlled even when there are huge differences in the current flowing through the zener diode.

There are other problems. Temperature is one of them. If there is too much current then the zener diode will warm up from the excess dissipation required and this will also affect the resulting zener voltage. The rating is based on the idea of dissipating about \$\frac{1}{4}\:\text{W}\$ and waiting until it stabilizes at the rated ambient temperature. As you can see, there could be quite a difference in the current and that means quite a difference in dissipation, too. So while it seems pretty nice already, there is a price hiding behind the scenes, too -- temperature rise due to varying dissipation with different applied voltage sources. So that's another concern. But for a later time, I think. Just a note to the wise.

A Zener diode is intended to be a current-driven device. It has a low 'slope resistance'.

When designing a circuit using a zener diode, ensure there is enough resistance in series with the diode so that over the whole range of operating conditions (and transient/fault conditions) the circuit will see, the zener diode is not presented with a continuous current of more than Is max.

In its typical shunt regulator voltage reference mode, a zener diode will be supplied with a current of nominally Iz (the current that the diode has been tested with) which tends to be in the 5mA to 10mA range. Its voltage drop is then its nominal zener voltage. Where low accuracy is adequate, this current is supplied through a large resistor connected to a much higher input voltage.

If the current varies, the zener voltage will vary, but not by much. The 'better' the zener, the lower the slope resistance. With our 1 ohm slope device above, a change between 5mA and 10mA would cause a change in zener voltage of 5mV.

Where higher stability is required, a common trick is to use the circuit's regulated output voltage to help define a constant current through the diode. This improves the effect of slope resistance by several orders of magnitude, rendering it a negligible error compared to the thermal variation of zener voltage. Depending on the specific part used for OA2, this circuit may or may not start up. It will for most types. If it doesn't, an additional biassing resistor or startup capacitor can be used to ensure it starts.

It's worth pointing out the single transistor 'amplified zener'. Q1 maintains 0.7v across R5, which acts as a constant current source for the zener, in this case 5mA. The tempco of Q1 VBE is nominally matched by the tempco of a 6.2v zener, so the overall combination has a reasonable tempco.

Not the answer you're looking for? Browse other questions tagged diodes zener or ask your own question.