The pot I'm using is very similar to the one in this link:

The LM386 amplifier circuit I'm using is the one in this link:

What I'm doing with this circuit is using it as a simple overdrive pedal for my guitar. Eventually, I'm going to wire this circuit directly into the guitar's pickup wiring.

My circuit works great and I was able to use the above potentiometer as a volume knob with great success.

The only problem now is the pot's switch must be turned on in order for signal from my guitar to go to the amp. When I turn the pot switch to off, the signal cuts off completely.

I know I could do this with a push/pull type of pot but I like the feel of the rotary switch pot. Plus, I already have a few of them lying around.

At the expense of some battery drain a reed relay would provide a good solution with the added benefit that in the event of a battery failure the guitar is still usable and would avoid a cringe inducing silence on stage. 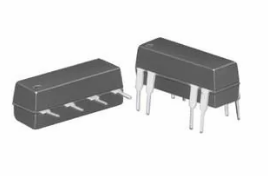 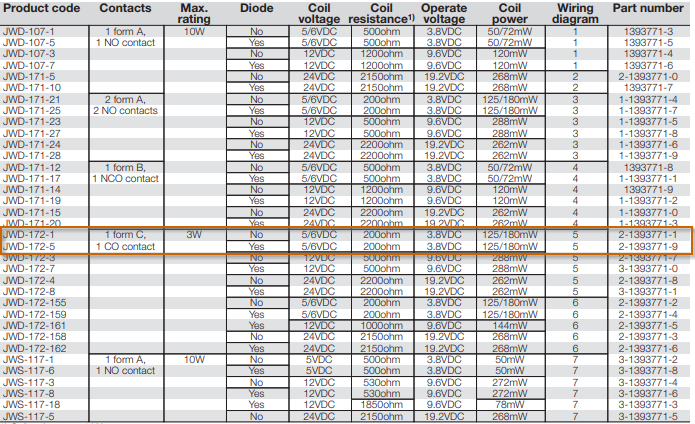 A quick web search finds that these are available in 5/6 V DC versions (so a series resistor would be required) with a 200 Ω coil. At 5 V this will cost you \$ \frac {5}{200} = 25 \ \mathrm {mA} \$. Since the current is that high you can add an LED in series with the coil and reduce the resistor value to suit or leave it out for a white LED which typically have a VF of > 3 V. (The relay coil would provide the current limiting for the LED.)

is the DC thump you are talking about the "knock" I hear when I turn off some solid state amps?

It's more usual when the amp is switched on. 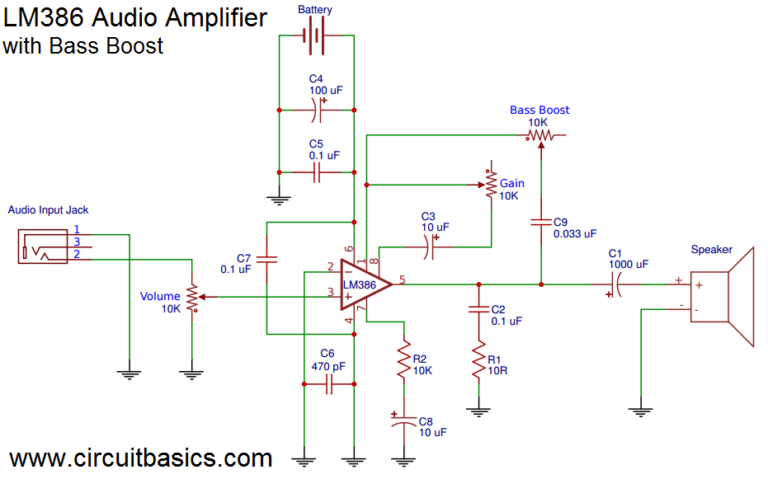 The DC thump occurs because the amplifier is powered from a single rail. Since audio is alternating current it means we need to bias the output to mid-supply or 4.5 V in this design. This should be measurable on pin 5 of the LM386. We don't want to feed DC to the loudspeaker as it will cause unnecessary heating and distortion due to biasing the speaker in or out depending on polarity. The biasing of the speaker means that it has less travel in one direction before it maxes out and distorts.

Looking at the schematic of Figure 4 we can see that this is unlikely to help. The pot is on the input whereas the thump is coming from the amp and C1 on the output.

Since you are only using this as a preamp rather than a power amplifier you could move the pot to the output, after C1, and this might solve the problem for you. It also has the benefit that any noise generated by the amplifier will be attenuated by the pot at lower settings thus giving you a decent signal to noise ratio independent of volume setting. In the original design the amplifier noise will be the same no matter what the volume setting is.

From your explanation, you are not using the circuit as actual audio amplifier, i.e. you are not feeding it into speaker, but rather using it as pre-amp for external audio system. Is this correct?

If this is the case, then there might be a way to do what you want with SPST switch. Basically, if there is NO noise coming out of amplifier with volume pot all the way down to ground it MIGHT be safe to simply short-circuit input from guitar pickup to the output of circuit. Ideally with capacitor in series to at least avoid DC loop.

Having said that, the potentiometer in photo looks like SPDT switch (it has 3 tabs on the back, and according to this post it comes in the packaging marked as SPDT). You can easily verify this with multimeter or even with battery + lamp. And if it is indeed SPDT then you can use it to switch either input or output of your circuit between pre-amp and bypass without worrying about frying the circuit.

Of course, in either case you'd lose the ability to switch power off, so you would need additional switch for that, which kinda defeats the purpose.

Your best solution would be to find DPDT switch like this one or this and use one group of contacts to route the audio signal and the other one to supply power to your circuit when audio routed through it.

Not the answer you're looking for? Browse other questions tagged switches wiring potentiometer guitar-amplifier or ask your own question.