For a project I am working on, I want to build a 9x9 monocolor LED matrix also with 9 push buttons to control the LEDs using the PIC. So far I have gathered that I think I will be needing shift registers to drive the cathodes and shift-register chips to drive discrete transistors for the anodes. I will also require shift registers for the push button inputs as well.(Please correct me if i'm wrong).

I am having trouble looking for relevant information online (e.g. what components to choose), can anyone give me some ideas to research or any relevant advice would be most helpful! Thanks

I'll assume that you want to drive the matrix common anode, i.e. one anode line at a time.

The good news is that you don't need a separate shift register for the buttons: connect each of them to an anode line, with the other pins tied together to an input, and connect a pull-down resistor on that input.
Now, every time you scan one anode line you can see on the input if the button for that line is pressed; input high = pressed, input low = released.
If you expect users will press two buttons at a time (they always will!) you'll have to put diodes in series with the buttons to prevent that other rows of LEDs than the selected one light up.

edit re your comment
In your sketch you have the LEDs' resistors in the columns, which is OK if you drive the display one row at a time. Otherwise the resistor will share the current for all LEDs in a row, and the brightness will vary with the number of LEDs which are on. In my schematic below I moved them to the rows, so that each LED has its own resistor. 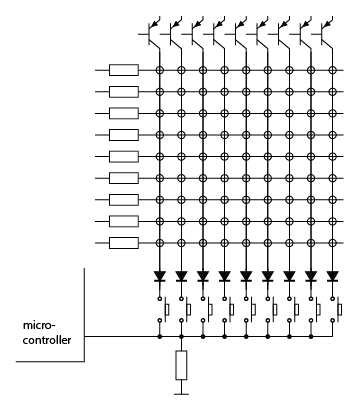 The circles represent the LEDs. The microcontroller input will be pulled low by the resistor. If one of the buttons is pressed the input will go high when the associated column is selected. So upon each column scan you can check the status of one button. The diodes prevent lighting of LEDs in other columns than the active one if more than one button is pressed simultaneously.

2
How to switch/power a 13x13 LED Matrix?
2
Simple solution for driving a large-ish RGB LED array with PWM
1
Interactive Single Color LED Matrix
0
Interrupt doesn't seem to reenable on PIC16F887
1
Loading a shift register without displaying its contents/output?
2
Questions for a personal LED/ATmega328P-PU project
2
9X9 RGB Led matrix, design suggestion
1
Illuminated LED and push-button using only 2 wires
3
P channel MOSFET switching problem
0
How do you configure the 74HC595 to have low pin outputs at power on?