I'm having an issue understanding a simple concept for faults. I understand the principles of how the relays cause the circuit breaker to open etc when a larger current goes through them to provide overcurrent protection.

But I don't quite understand why only the breakers of a certain section of a circuit will trip in some cases.

For example for the following Circuit: 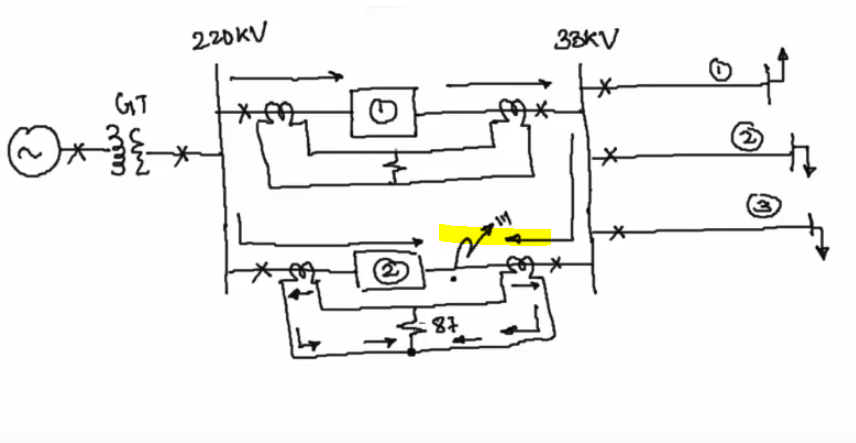 If a fault occurs at the highlighted section, why don't all circuit breakers open to isolate the fault. Doesn't this fault cause a much larger current to be drawn from the generator (e.g 10x the rated current?) and so wouldn't the other breakers trip as well not just the section where the fault is located. Also how does the generator supply enough current for this fault in the first place?

Essentially I'm having trouble understanding why only this section is isolated.

The order of breaker trips is usually laid out in a selectivity calculation. Usually the closer to the source (generator in this case), the later the breaker will trip. The order of trip is not determined by the breaker's capacity, but by it's time current curve. This is roughly speaking a logarithmic multiplication of the overload current and the time it lasts.

However, in a ring-net system like mentioned in the question, it is almost impossible to be selective enough using "time current" to cover all configurations and possible faults. In such cases there are systems which determine the "location" (Zone selectivity) of the short circuit by measuring the direction of the current, as mentioned in Transistor's answer or in a more digital way in modern breakers. There are systems where breaker communicate this data to make a final determination which ones should open. Or other methods. This page from ABB has some nice graphic examples about advanced selectivity techniques.

More explained below, but looking to the diagram the following order of protections should kick in, depending on the seriousness of the fault:

From this source, with more detailed explanation. 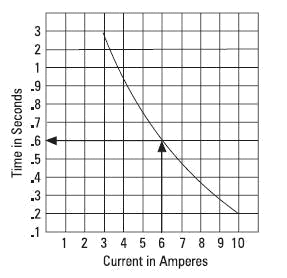 To determine how long a breaker will take to trip at a given current, find the level of current on the bottom of the graph. Draw a vertical line to the point where it intersects the curve. Then draw a horizontal line to the left side of the graph and find the time to trip. For example, in this illustration a circuit breaker will trip when current remains at 6 amps for 0.6 seconds.

For this example a 200 ampere trip unit is selected. 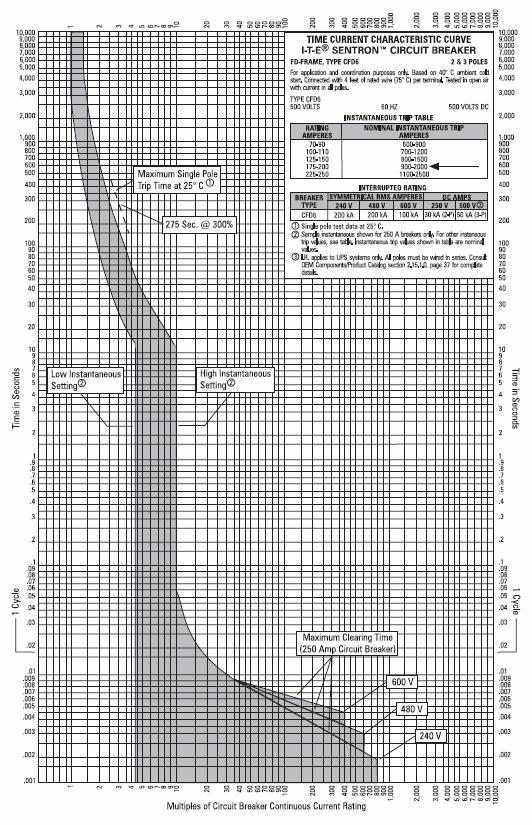 An overload constitutes an excess of AC current during an amount of time. Those are thermal protected according the time current curves noted above. Short circuits however are more violent and are magnetic protected. The above mentioned sources (and google) also give you more info about this subject, which is an important background.

The above part hopefully answers the text part of the question, which specifically mentions over-current trips. However, the diagram attached to the question actually has an earth fault. This means 1 or more phases is connected to earth and doesn't necessarily creates an overload or short circuit current.

This should not give any overload or short circuit currents. However, it may affect the insulation of the installation cables. When 1 phase is connected to earth, it's phase-earth potential becomes 0V. The other 2 phases will have an potential voltage to earth multiplied by √3. If the installation is not capable of handling this increase of voltage, the fault should be terminated by opening breaker.

These insulation levels are discussed as follows:

Cables in this category may be applied where the system is provided with relay protection which normally clears ground faults within 1 minute This category is usually referred to as the grounded systems.

Cables in this category may be applied where the system is provided with relay protection which normally clears ground faults within 1 hour This category is usually referred to as the low resistance grounded, or ungrounded systems.

Cables in this category may be applied where the time needed to de-energize the ground fault is indefinite This level is recommended for ungrounded and for resonant grounded systems.

If the installation uses cable in the first, 100% category, the earth fault measurement should cause a breaker trip. In the other 2 cases it will just raise an alarm to the plant's operators and they should intervene within the time limitations noted above. Usually earth faults are logged to not exceed the cable's service life.

If there are any currents to earth or mismatch in phase currents, which doesn't necessarily case an overload or short circuit, there is a differential protection which should trip breakers. The question already includes a differential measurement around the fault, which means that this should act and not any over-current relay, only if there is in fact a current to earth. A nice read on this subject can be found here.

It can be a nice start to read about the various levels of protection in this wikipedia article and use google on the terms used.

Why only the breakers of a certain section of a circuit will trip.

It is simple logic. By most anyone's regulations the most downstream breaker should be the one to trip OFF if the overload is part of its load(s).

There is an intentional cascading topology where the main breakers have the highest rating and are the least likely to trip. A 1200 amp main service entrance panel could be full of mostly double/triple pole breakers in the 50 to 250 amp range. The master breaker would be 1200 amp and it is large and tough to manually switch on/off.

A 250 amp breaker to a sub-feed panel (there could be many sub-feed panels in a manufacturing plant) basically protects the sub-feed panel, which has rows of 15 to 30 amp breakers to protect lights and wall outlets, in the sense that a short or arc fault has occurred and the breaker trips to prevent a small problem from turning into a large one.

This cascade effect insures that only the lowest rating breaker closest to the shorted device will trip.

Ultimately breakers and fuses mostly exist to prevent wires from burning and causing a fire. They seldom can protect semiconductors. There are expensive platinum strip fuses designed to protect large SCR's and MOSFET modules.

I can't speak with any great authority on this but the following thoughts occur to me.

This poses a little design challenge. How can we determine the power flow direction on an AC current when it is alternating by nature? The answer is to use a directional relay.

A rotating disc is driven by eddy currents induced by a pair of coils - one fed from line voltage and the other by a CT from the line current. The torque on the disc will be proportional to the vector product of the voltage and current and the direction of rotation will be determined by the relative phases. In the illustration the contacts will close when the disc moves clockwise so all that is required is to arrange the voltage and current phasing to open the contacts in normal power flow.

The contact of the directional relay can then be used to suppress or enable features such as earth fault tripping on a circuit breaker. In your example the contact would be open on X3 but closed on X4 to ensure that the correct breaker trips.

Not the answer you're looking for? Browse other questions tagged current transmission-line power-engineering circuit-protection fault or ask your own question.

4
Will a RCBO 4P trip in case of neutral fault/failure/interrupt/float?
1
Circuit breaker trip timing
4
What factors play into choosing type of MCB (Circuit Breaker) which is B16 vs C16 vs D16?
4
Why symmetrical component analysis is necessary for fault calculation?
9
Why aren't starter circuits protected?
5
Circuit breaker vs fuse timing
1
Line to ground faults
0
Both fuse and circuit breaker operated
3
Fault current indicator - what should I do?