How do I create a subtractive or dffferential two channel audio mixer?

I have a desktop mixer made by Behringer (Xenyx X2222USB although I am not using its USB capabilities) which has a line level output that feeds 2 channels of a Behringer USB audio interface (U-Phoria UMC404HD). I have several direct audio sources (including a single headset microphone) that feed the mixer which would be panned accordingly.

What I want to do is to take the left and right line level outputs and create a circuit that divides each output into 2 buffered outputs (in order to isolate any cross-talk between channels) each. One from each channel will go into a summing mixer so I can get a (L+R) signal. The other pair I want to run into a subtractive or differential mixer to obtain a (L-R) signal. The pair will then be fed into channel one and channel two of the interface.

The idea is that I want to create a Mid/Side mix live from a typical Right/Left configuration. I know it can be done from the PA Speaker (Ala Aspen Pitmans Space Station) by deriving the (L+R) and (L-R) signals and feeding them into separate amplifiers with speakers pointing 90 degrees from each other. It can also be done in an acoustic space using a hyper-cardioid polar pattern microphone for the Mid channel and a bi-directional (or figure 8) polar pattern to capture the side channel. This gives a rich stereo sound no matter where one is in the particular area in relationship to the speakers location. I am convinced it can be done in the mixing stage as well. This way I can both record the show via my computers DAW as well as run it through the PA speakers (and/or headphones) via this Mid/Side technique.

I know I can create this in a VST ".dll" file, but I prefer to program in solder. Even if the idea is unfounded, it would make an interesting experiment and may provide the basis of actually figuring it out. In Aspens design, the speakers are at a 90 degree angle from each other on the horizontal axis which allows the phases to not cancel each other out. 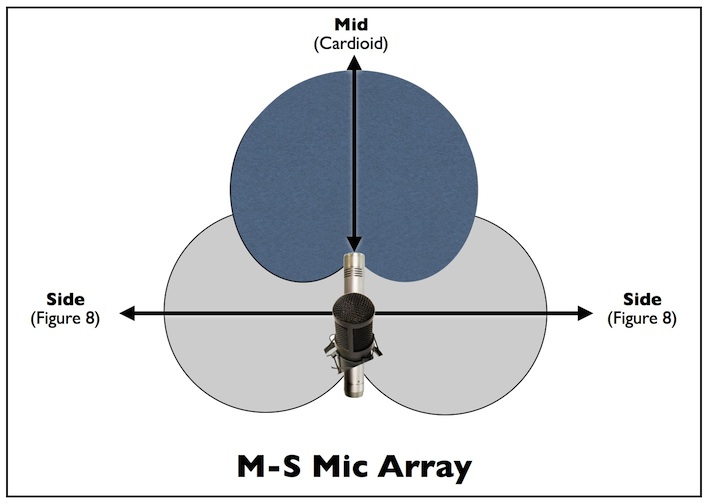 A very simple solution would be to use a pair of 600 Ω line isolating transformers.

Transformers would be 1:1 type, typically 600 Ω if your circuits can work at low-Z levels.

Alternatively an electronic solution is possible.

Figure 2. A is inverted twice and comes out the same way up. B is inverted once and is subtracted from A. Positive and negative power rails and decoupling capacitors have been omitted.

If your mixer is fancy enough you could do two sub mixes and use the phase invert if it has that feature or invert the balanced input.

L-R just means left and right channels are out of phase and summed to mono. So you can flip the polarity of the right channel either on your mixer, or at the connector (by swapping pins 2 and 3 on the XLR or T and R on the TRS connector) and then sum them into a mono bus and you have your L-R signal.

Although you could accomplish all of this with a mixer that has a polarity flip switch. That would be the simplest, most direct way.

Not the answer you're looking for? Browse other questions tagged audio signal-processing differential mixer music or ask your own question.

2
Mic Amp Mixer and Audio Distribution, Won't Work! Help! (Update 2) (Solved!)
7
Using diodes to mix 2 audio signals into one set of speakers
2
DIY mixer - use diodes to prevent input potentiometers influencing each other
0
Isolate two audio inputs to amplifier circuits on ground connection
1
Mono to stereo circuit only if one cable is plugged in
4
LM393 comparator misbehaving and causing issues