Suppose we have a fully charged capacitor and we connect it to an inductor.

So less capacitor voltage makes the current less and less inductor voltage cause more current at the same time. Then what makes sure that current will initially rise and will then fall during the first half cycle of the oscillation ? 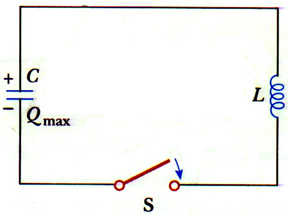 With ideal components, this process repeats indefinitely. The finite energy is constantly sloshed back and forth between being voltage on the capacitor and current thru the inductor. Both the voltage and current have sinusoidal profiles. This is referred to as resonance.

This is also called a tank circuit. Tank circuits are often used as notch filters, since the frequency of oscillation is specific to the particular capacitance and inductance values. It has the interesting property that the impedance across the parallel combination of capacitor and inductor is 0 at 0 and infinite frequency, and infinite right at the resonant frequency. This drastic impedance peak at the resonant frequency is often exploited to either filter in or filter out that frequency.

Once the switch closes, the voltage across both components falls (initially more gradually) towards zero volts and when zero volts is reached all that you have for that moment in time is current flow. But that current flow in the inductor is stored energy and it is the same level of energy as stored in the capacitor prior to the switch closing and this further accelerates the decline in voltage from zero to negative values.

As this current gradually reduces to zero, a negative voltage peak is reached where all the energy returns to the capacitor in the form of a negative voltage. The same energy as stored prior to the switch closing.

Then we are back to the start but with the capacitor having a negative voltage of the same magnitude as originally set on it prior to switch closure.

Not the answer you're looking for? Browse other questions tagged circuit-analysis oscillator or ask your own question.

3
What actually happens in a RC circuit?
3
how does current go to infinity in an ideal LC circuit at resonance?
0
Operation Of LC circuit
1
Damped RLC Circuit Equation
1
I have a question in designing crystal oscillator
1
Starting Oscillation in Sine Oscillator
0
Why exactly a RLC Circuit powered by DC oscillates?
5
Soft latching power switch
0
Charged Capacitor discharge into LC circuit (with Freewheeling diode)