Multiplexing Inputs on a microcontroller

I have a 4 way DIL switch that I use to provide input to a microcontroller, and I need to free up a port to use for something else.

Is there a way to multiplex 4 inputs into 3 microcontroller ports? I'm thinking that there may be some way to have 2 pins as inputs, and a 3rd output pin that can be driven high to read switch 1 and 2, and low to read switch 3 and 4.

My current simple design is shown below, can I do this with just 3 pins? 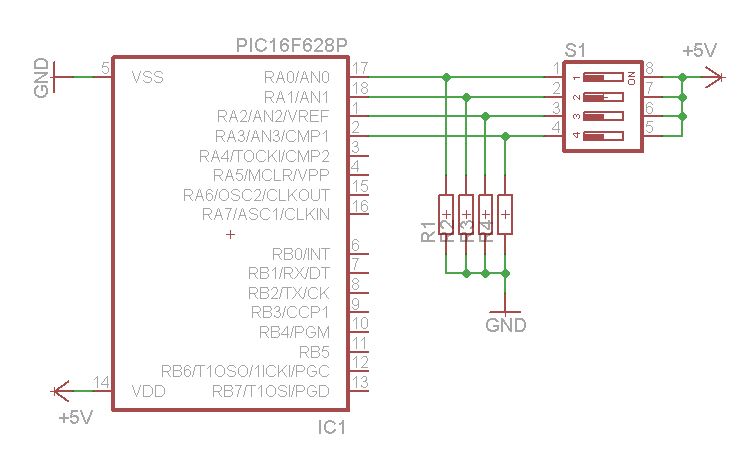 Charlieplexing takes advantage of tristate pins of the microcontroller, but it costs extra diodes and somewhat more complex programming. 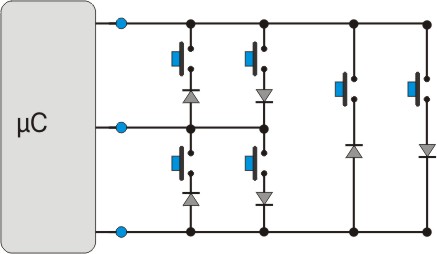 What you describe is a 2-to-1 multiplexer, like the 74HC157, which is a quad 2-input multiplexer, so 2 inputs to 1 output, and 1 select input. You use two multiplexers for the four inputs.

The 74HC153 does a similar thing, but it's a dual 4-to-1 multiplexer, so 4 inputs, 1 output and 2 select lines per multiplexer. Personally I find that a more logical solution for your application.

Connect the enable input to ground, and don't forget to connect unused inputs either to ground or Vcc.

As an alternative to Steven's solution you could use a 2:4 demux like this: 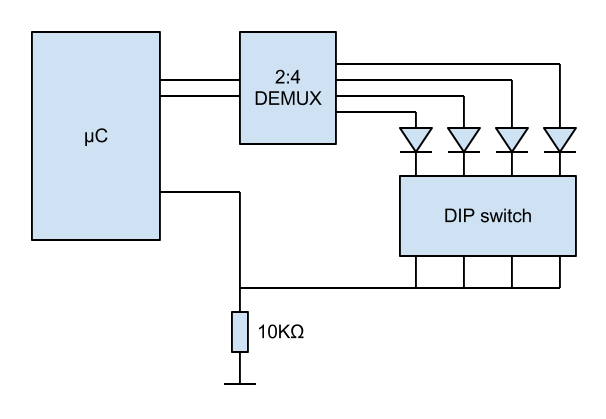 Great solution by jippie. I'd like to elaborate a bit on it. 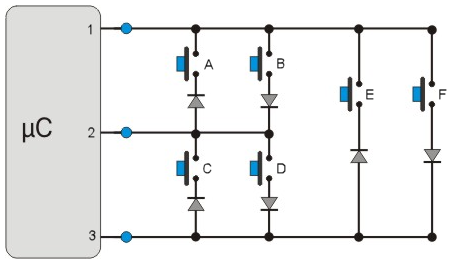 The idea is to make one of the I/Os output and the other two input which allows you to read the state of two buttons. Three times output \$\times\$ two inputs is good for 6 buttons as the schematic shows.

How do I activate the output? Make it high? Let's do it for pin 1, then diodes B and F are forward biased, so we'd expect to be able to read those buttons. For many microcontrollers this won't work. Pressing button B will make input 2 high, but what if the button isn't pressed? The input would be floating, and then you can't read anything meaningful on it. A pull-down resistor would help, but many microcontrollers only have pull-up resistors, and then you'll never read a low level. I don't know about all of them, but at least a number of AVR and PIC microcontrollers only have pull-ups.

In that case the right way is to activate the internal pull-ups and activate the output by making it low. We're not controlling buttons B and F, but A and E. If button A is not pressed the pull-up will make input 2 high. Press button A and you pull the input low.

As far as I know all NXP Cortex-M controllers, for instance, have both configurable pull-up/pull-down resistors. For those you can use positive logic (high = pressed) if you use the pull-downs, and an active high output. Note that you will read different buttons for the same output:

If you can rely upon your I/O pins to switch at the same threshold, and you don't mind disabling interrupts for a long time while you read the switches (e.g. because you just read them at startup), you could use two I/O pins, six resistors, and a capacitor. Wire a 1K, 2.2K, 4.7K, and 10K resistor in parallel with each switch, and wire all the switches in series so that the chain will have total resistance from roughly 0K to 17.9K. Put a 1K resistor in series with that chain and tie it one end of the chain to a port pin and the other end to a capacitor. The other end of the capacitor should go to ground. Wire a 10K resistor from the other port pin to that capacitor.

It may be possible to improve accuracy slightly by using a third pin connected directly to the capacitor to determine when it is suitably charged; using the same pin for both measurements would ensure that both measurements are taken with the same switching threshold.

I noticed that you have an analog input there. If you want to use a minimum amount of components connect one side of all switches to the analog input then connect the analog input to +V with a 1K resistor. Connect four different values resistors to the other side of the switches. Choose your resistors carefully to ensure that you get a different voltage regardless of how many switches are on at one time. Generate an interrupt when A/D conversion value is changing or have a routine that reads the value as often as you require.

My approach would be to use a serial bus I2C/SPI/etc.. You could run that on a 3 pins and have an input register for the switches on that bus. While expensive and more bits that you need currently, the MCP22017 is pretty flexible. Other choices with 8 bits are available if you look around.

Not the answer you're looking for? Browse other questions tagged microcontroller multiplexer input or ask your own question.

8
When IO is limited on a uC, how do you move the logic away from the uC?
2
Creating a keyboard with a microcontroller, do I need an input pin for each key?
5
Need 1-4 pins controlling 16pins logic level
6
Detecting paired node combinations
0
Handling large numbers of input contacts