Where does this current source symbol come from?

There's an old symbol for a current source that's just two overlapping circles, reminiscent of a Venn diagram. There is more than one question on here with people asking what the symbol is, but I'm interested to know where it comes from; is it just an abstract symbol with no meaning behind it, or is it meant as a simplified drawing of something?

Symbol d in the above image (taken from wikimedia commons) is the one I'm asking about. Symbol a is the one that I am most familiar with, and I've never seen symbols b, c, or e before.

I'm aware that the precise reasoning behind any given symbol doesn't really matter, but I simply have an interest in... "etymology", I guess you could call it? ...now I've gotten to thinking about circuit diagrams as a language, and studying them from a linguist's point of view....

I managed to run a reverse Google image search to see where this picture came from. It found it on the Russian translation of Wikipedia. For some odd reason, the English version of this page has somewhat of a different format than the English version.

Here's the Russian Wikipedia page where this picture comes from. You're going to have to use some translator.

But here's what it says about the picture you have provided:

(a) and (b) are common notations for the current symbol. (c) were established by GOST and IEC. GOST is some type of Russian standards for electrical protocols. (d) and (e) are found in foreign literature, though it never says where exactly so it's possible that it's entirely made up for somewhere really obscure and possibly not credible, except for (d). I have seen (d) from plenty of sources as well. I'm not entirely sure why this Wikipedia page says, "Foreign literature" but I have yet to find the origins of (d).

The picture itself is a creation of one's own work meaning that whoever created this picture did not cite where they got this information.

Further investigation utilizing an old handbook it does indeed contain (c) as an ideal current source.

I'd recommend looking into how various current mirrors are implemented to understand why one why one may want to represent all of that with this simple diagram. Basically, it's a shortcut to eliminate showing an entire half of the actual circuit here. Especially in op-amp designs where many current sources derived from a single current source are used, this short-hand notation saves a lot of effort and simplifies the look of the schematic while still capturing all relevant information. 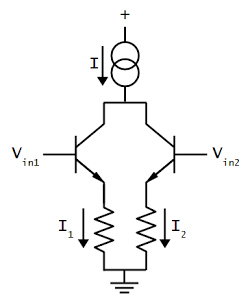 The image I mentioned in a comment above is used by the Danish Wikipedia page on current sources. A Google translate of the page has the following to say.

A power generator - English: "Current Source" (commonly referred to as a Norton generator) is an electronic circuit that can deliver a given power regardless of the load.

Unless something else comes to light I will postulate that it is a symbol for a Wimhurst machine which was a low current high voltage generator from the early years of electrical exploration and would have behaved as an ideal current source under load with a constant speed rotation.

In the same way that our default voltage source was represented on schematics by the battery symbol that mimicked the Voltaic piles of the early electrochemical researches. This is in contrast to most of modern battery technology that has cylindrical or coiled/wrapped cells while still using the flat cell symbol.

Not the answer you're looking for? Browse other questions tagged schematics current-source symbol or ask your own question.