what is the maximum load for an instrumentation amplifier, in particular the AD620?

From the reading of This datasheet, I can't figure out what is the maximum load I can put at the output. To make my question more precise, suppose I need a gain of 10 (for DC measurements), for an input voltage between 0 and 1V (at very high impedance, that is why I want to use this amplifier (in my stock) that has only a few nanoAmp of input bias current), and assume the supply of the amplifier is generously above 10V.

question 1: What is the maximum load I can put at the output ?

question 2: In p. 15 they say the maximum input current is 6mA (or 60mA for few hours). I thought amplifiers are not supposed to draw any input current, except, of course, the input bias and input offset currents. Can someone explain ?

Pretty much all of the specifications are only guaranteed with a load of 2 kohms:

The ones where it's "otherwise noted" (for example, nonlinearity as seen in the image, and output voltage swing) generally specify a weaker load of 10 kohms, not a stronger load. 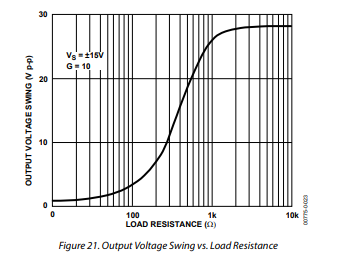 I thought amplifiers are not supposed to draw any input current, except, of course, the input bias and input offset currents. Can someone explain ?

Under normal operation, the inputs will draw very little current.

But, for example, if you drive the input voltages above or below the power supply rails, they might draw considerable current through the ESD protection diodes. You would not expect the amplifier to perform normally (give the desired gain, etc) under these conditions.

One situation where this could happen is if the driving device is powered up before the AD620 power rails are.

Not the answer you're looking for? Browse other questions tagged instrumentation-amplifier operational-amplifier or ask your own question.