Batteries connected both in series and in parallel

Edit, according to this, two batteries connected like that output 6A. If measured separately they are 3A. 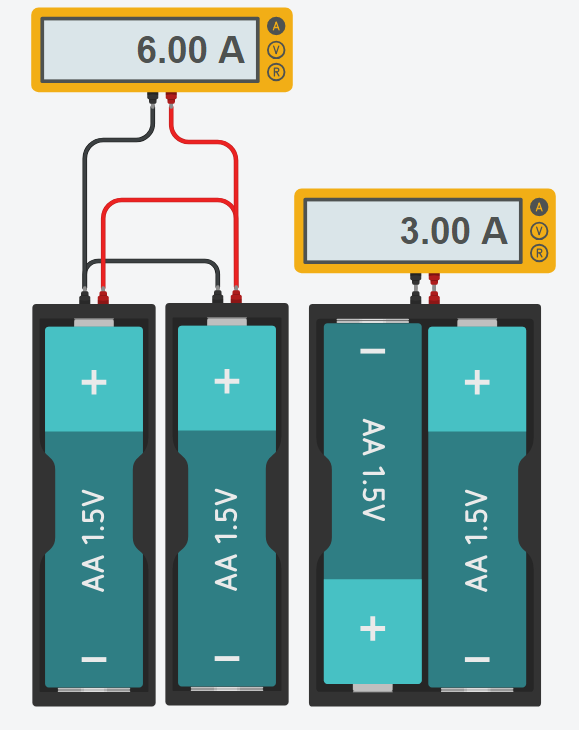 "Some sources" are correct - but only in certain circumstances. If you are driving a fixed resistance, connecting two batteries in series will, in fact, double the current. Well, approximately. It won't be an exact doubling, since batteries have a volt/amp curve which produces less voltage for more current. For very low currents and some high-current battery chemistries, two batteries in series may come very close to twice the current.

For high currents, such as a level which will discharge the battery in 10 hours or less, you can count on a noticeably smaller capacity when the current is increased.

Conversely, to your specific situation, you've done the calculations correctly, and 7 minutes/14 minutes is about right. However, since each battery string is providing half the current when in parallel, you might reasonably expect greater run time. Like maybe 15 minutes instead of 14.

Your figure, on the other hand, makes no sense at all, and I have no idea where you got the idea.

Pushing further, you can combine many cells to get the desired voltage and Ah caracteristics.

Regarding discharge, a nominal 2Ah battery will be delpeted in one hour if you continously drain 2 amps. This is a 1C discharge. 2C discharge means that you discharge it at 4 amps...therefore it will last half an hour.

Yes you are confusing the information.

Adding cells increases the total mWh capacity if they are reasonably equal in parallel. If in series then the weakest cell limits current.

Thus putting in parallel will add up the milliamp hour capacity, while stringing in the series Adds up to cell voltages. Thus an array is often the optimum configuration to balance the voltage and increase the milliamp hours and again when balanced the total of mWh will be the sum of each component cell or pack.

When taking the total milliwatt hours and dividing by the mW of the load results is less than 10 hours then the total capacity the may be reduced. This will be significant if it is much less than one hour, But depends greatly on the cell’s quality factor for max discharge rate. Eg C/10 or C/40 etc

Always referred to the OEM data sheets for best calculations. If none are available then test and verify

Also keep in mind that A DC motor will draw 10 times the rate at maximum current if starting at full acceleration or full voltage and then reduce as the speed increases.

Not the answer you're looking for?Browse other questions tagged batteries parallel series or ask your own question.

2
3.7 Volt external battery to charge a another 3.7 Volt Phone Battery?
2
How to connect Li-ion batteries with thermistor pin in parallel?
0
Should I wire my electrical actuators in series, parallel or a combination of both?
3
How much time needs a 1.5 kW solar panel to charge a car electric battery?
1
Best configuration for 18650 batteries?
0
How to determine lithium battery versus the internal battery cells
1
What is difference between step-up voltage regulator, DC-DC converter, boost regulator
3
Minimum current for charging a battery