I am trying to aproximate a transfer function of a system. The system is a linear actuator, connected to a feedback potentiometer. The following figure is a step respons, with 24 V as input, and the potentiometer position as output.

This is a first order transfer function, and i've read that a linear actuator system, is at least a second order system.

If i make a step of the transfer function, i will get this:

If i then integrate this, i will get a graph like the first one, and it will be a second order system:

How should i approach this?

The goal is to create a control loop, something like this:

In this system, the output, Y(s), is a position (correct me if i am wrong).

Can the second order transfer function be made this way, and will it be a viable approximation, for a control system?

The standard formula for a second order system is:

My system does not look like this at all, is there a way to experimentally find an approxiamtion of this?

Integrating the output signal, and not feeding back the integrated signal, does not turn a 1st order system into a closed loop 2nd order system.

The classical indicator of a closed loop system being > 1st order is an initial step response gradient of zero. Overshoots are not as good an indicator, since the system could be over-damped.

Your actuator may look like a first order device if it is over-damped. However, it could still produce the 180 degrees phase shift between input and output that is synonymous with a 2nd order system. For example, examine the bode plot and step response of this overdamped RLC circuit (L = 1 henry, C = 1000 uF, R = 100 ohms): - 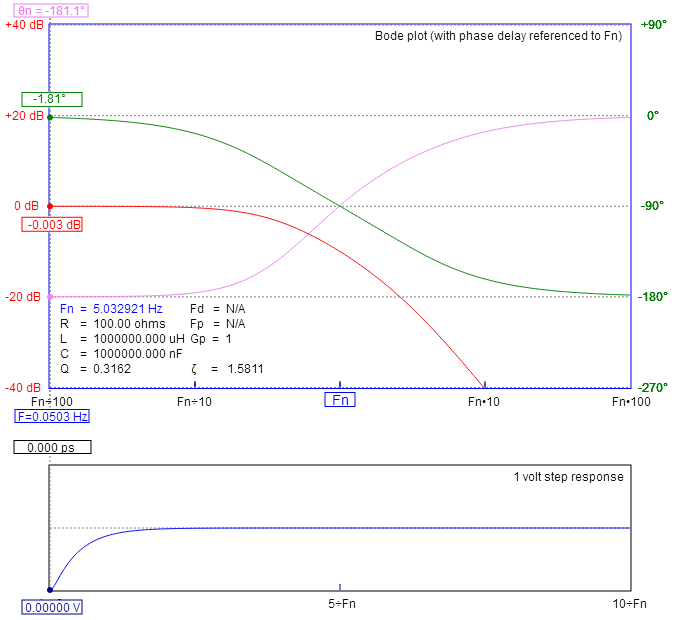 The red line in the top diagram is the transfer function |gain| and it certainly looks like a 1st order system but, the "giveaway" is the phase response (green). Note how it changes a full 180 degrees (whereas a 1st order system would only produce 90 degrees of shift).

The lower response is the step response and although it looks "1st order" at first glance, looks can be deceptive. The deception can mean that if this linear actuator is employed in a feedback system, and that feedback system does not properly accommodate the changes in phase angle, the system could show signs of instability such as hunting or plain ordinary hitting the end stops.

So , if you want to be sure about your actuator do a proper bode analysis that includes phase shift.

Yes there is, you need a system identification method to find your original transfer function.

Remember \$ H(s) = \frac{Y(s)}{R(s)} \$, so one thing that you also need is your input data to the system. Preferably a step input (to capture all the system dynamics).

There are many algorithms to help you find the transfer function from the input and output data, they are too detailed to describe here. (partially because data is sampled and not continuous so the math (which uses estimators) and explanation get complex and too long for an answer format). Some computational packages have built in toolboxes to estimate transfer functions.

My answer to your question (in short):

YES, it is possible for a second-order system to derive the transfer function from the step respose parameters.

The characteristic parameters of the transfer function are (1) the damping ratio d=theta=1/2Qp and (2) the pole frequency wn . Both parameters can be derived from the second-order step response.