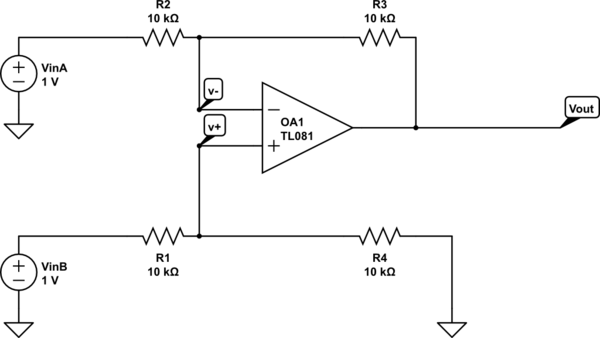 In analysing an ideal op-amp circuit I'm asked to state the input resistance seen by an input voltage.

Some of this may be irrelevant but a quick summary of the circuit:

So, the question is what is the input resistance seen by VinB.

a) the two resistors in series (since no current flows to the input), i.e. 20k?

c) something else I've overlooked?

No current flows into the Op amp terminal. So the only path in which the current can flow from VinB is through R1 and R4 to ground.

Since the opamp has very little current flowing into it, it can in most cases be ignored. For an ideal opamp (you need to erase the TL081 the input bias current is zero. For a real op amp it is uA to fA and for most cases can be ignored. This is why we use op amps, to buffer impedance.

The supply would then see the load as 20k for the VinB.

For VinA there are to cases to analyze, but the supply will see 20k. If you want to know how much max current will flow, then consider when vout is 0V

3
voltage divider before inverting opamp
3
How to deal with the opamp input offset in a circuit with multiple opamps with inputs connected together?
0
Find v1 and v2 of a summing amplifier when it is in series with another Op-Amp
1
A difference amplifier with a non-grounded non-inverting input
2
What is this opamp configuration?
2
Problem with chopper opamp(s)
0
Input resistance
8
Opamp noise: When is a resistor in the signal path?
0
How to get the 741 op amp to work as a linear amplifier?