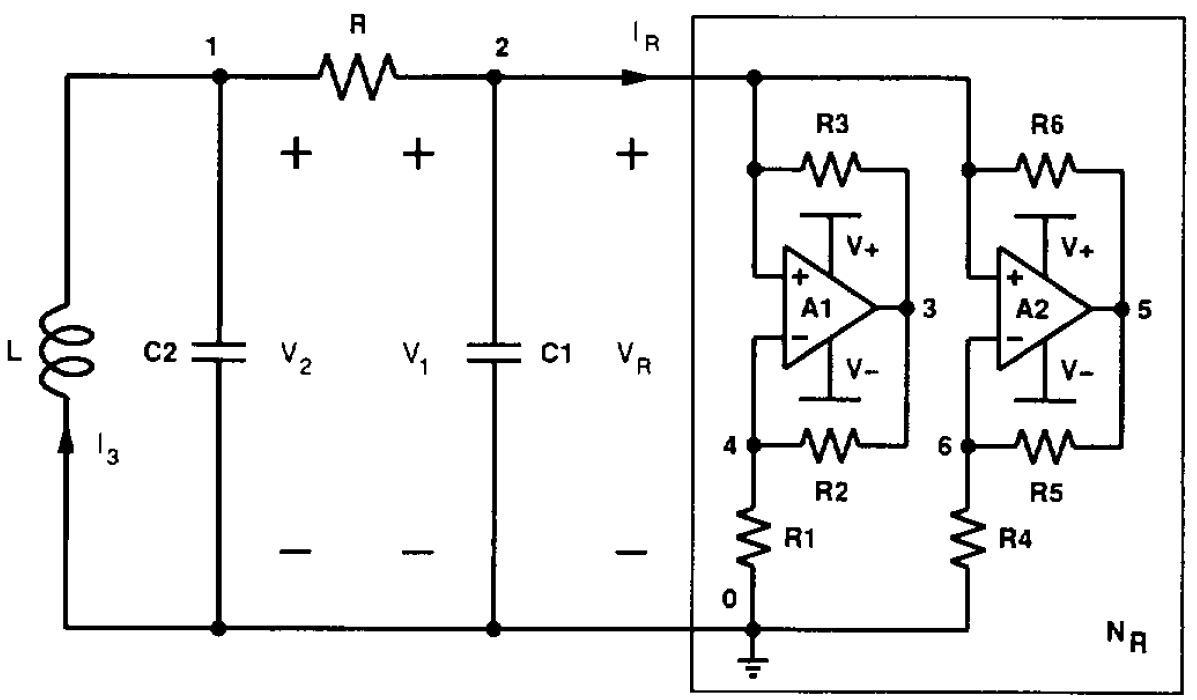 I simulated this nonlinear resistor in LTspice... 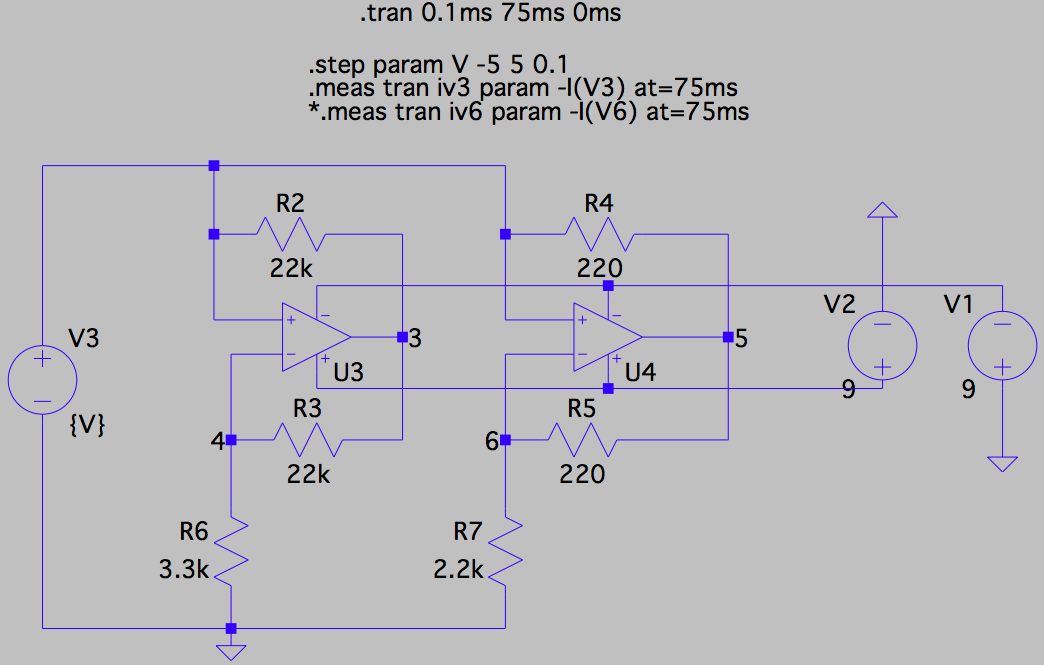 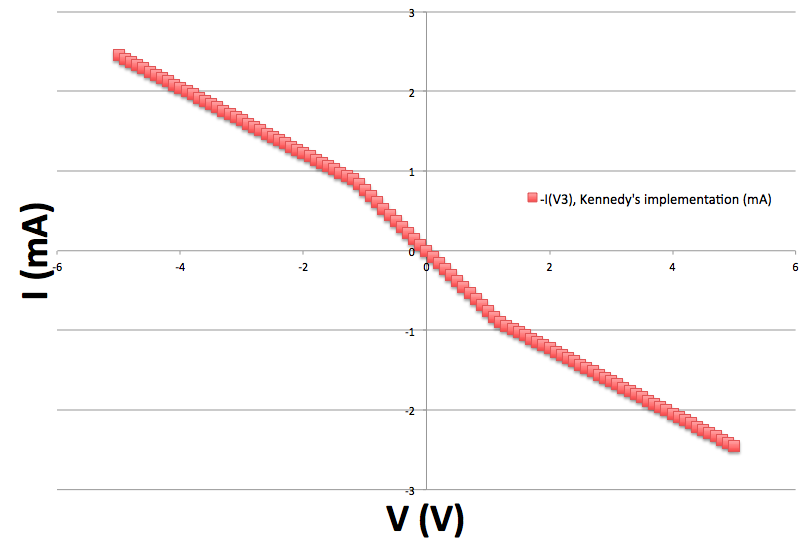 Mathematically, the I-V characteristics of this nonlinear resistor are given by:

Due to some design constraints, I would like to approximate this nonlinear resistor with one which employs a transformer whose output voltage saturates. I have approximated the output of the transformer using a piecewise linear function given by:

My idea is to pass the output of this transformer to an inverting op-amp whose output is then fed to a transconductance amplifier. This system should have I-V characteristics which closely match those of Kennedy's nonlinear resistor. The inverting op-amp causes the slopes of the piecewise components change sign, and together, the two op-amps scale the input voltage so that the output current closely matches the current outputted by the nonlinear resistor in Kennedy's paper. By fitting a linear regression of \$I_R\$ vs. \$V_{out}\$, I find that the scaling factor needs to be \$-0.245\frac{\text{mA}}{\text{mV}}\$. 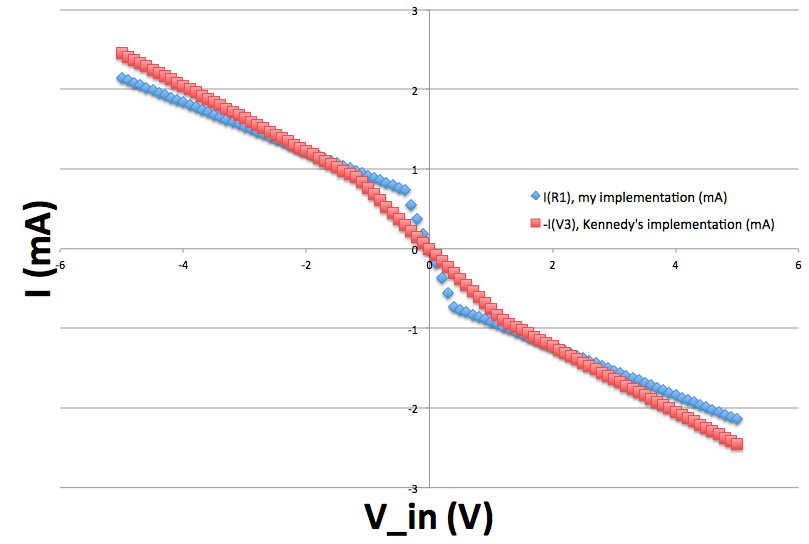 Next, to test that current outputted by my nonlinear resistor still induces chaotic behavior in Chua's circuit, I simulated Chua's circuit in LTspice, replacing the nonlinear resistor with an ideal current source whose output is given by \$V_{out}\$ (defined above) times the gain of \$-0.245\frac{\text{mA}}{\text{mV}}\$ (calculated above). This results in the following piecewise linear formula for \$I_{out}\$:

The circuit does indeed exhibit chaotic behavior, despite the approximation made to Kennedy's nonlinear resistor: 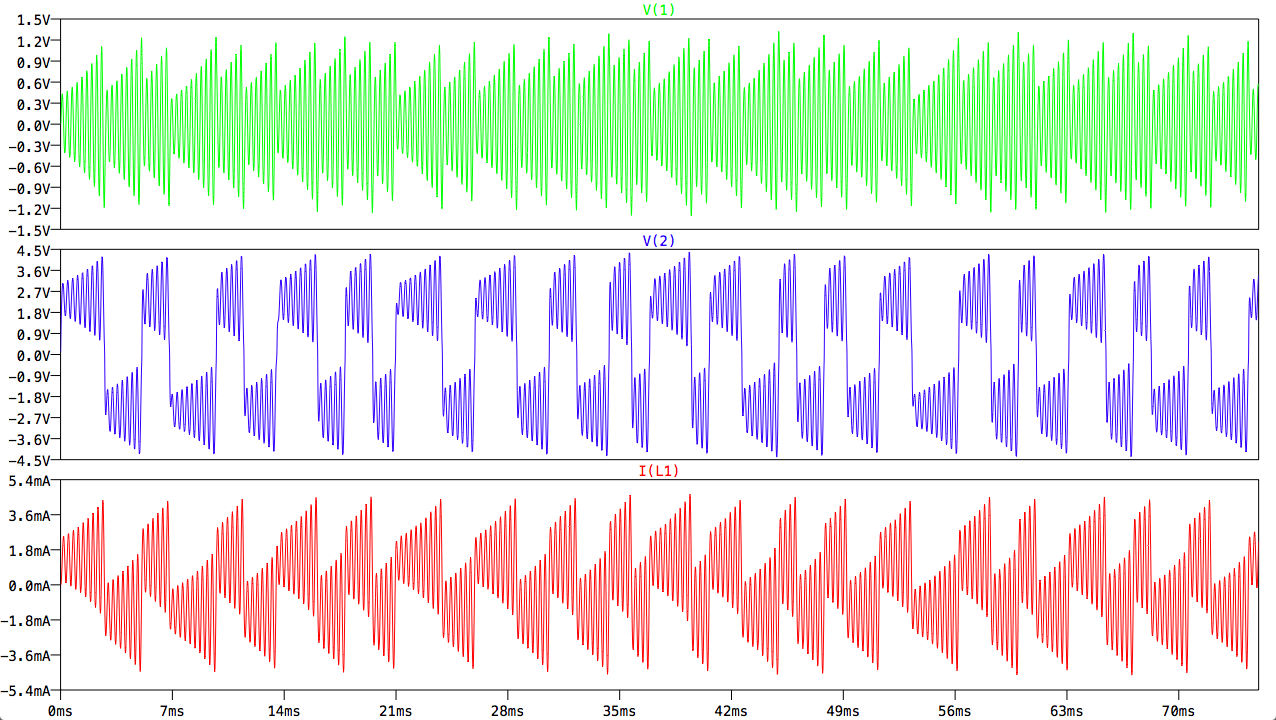 I ran the same simulation the one as above (with the ideal current source) and got a completely different result, shown below: 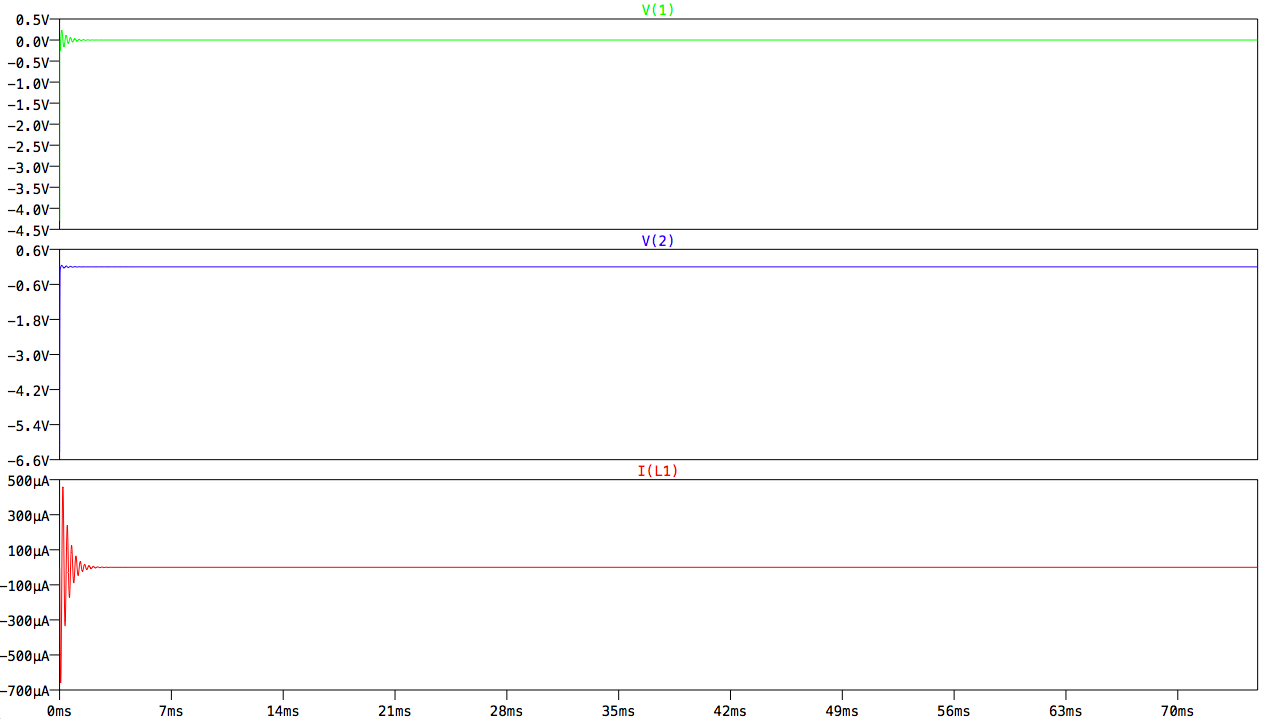 I am confused as to why the results do not match those shown for the circuit with the ideal current source and and could really use some help debugging.

In response to comments below, I am posting here the initial values for V(1), V(2), and I(L1) in both the circuit with the ideal current source and with my nonlinear resistor:

I tried your circuit(s) and I realized you're modeling the PWL source normally, but then you're inverting it with the first opamp. So I added a minus sign to the behavioural source, and tweaked the parameters a bit. Here's what came up: 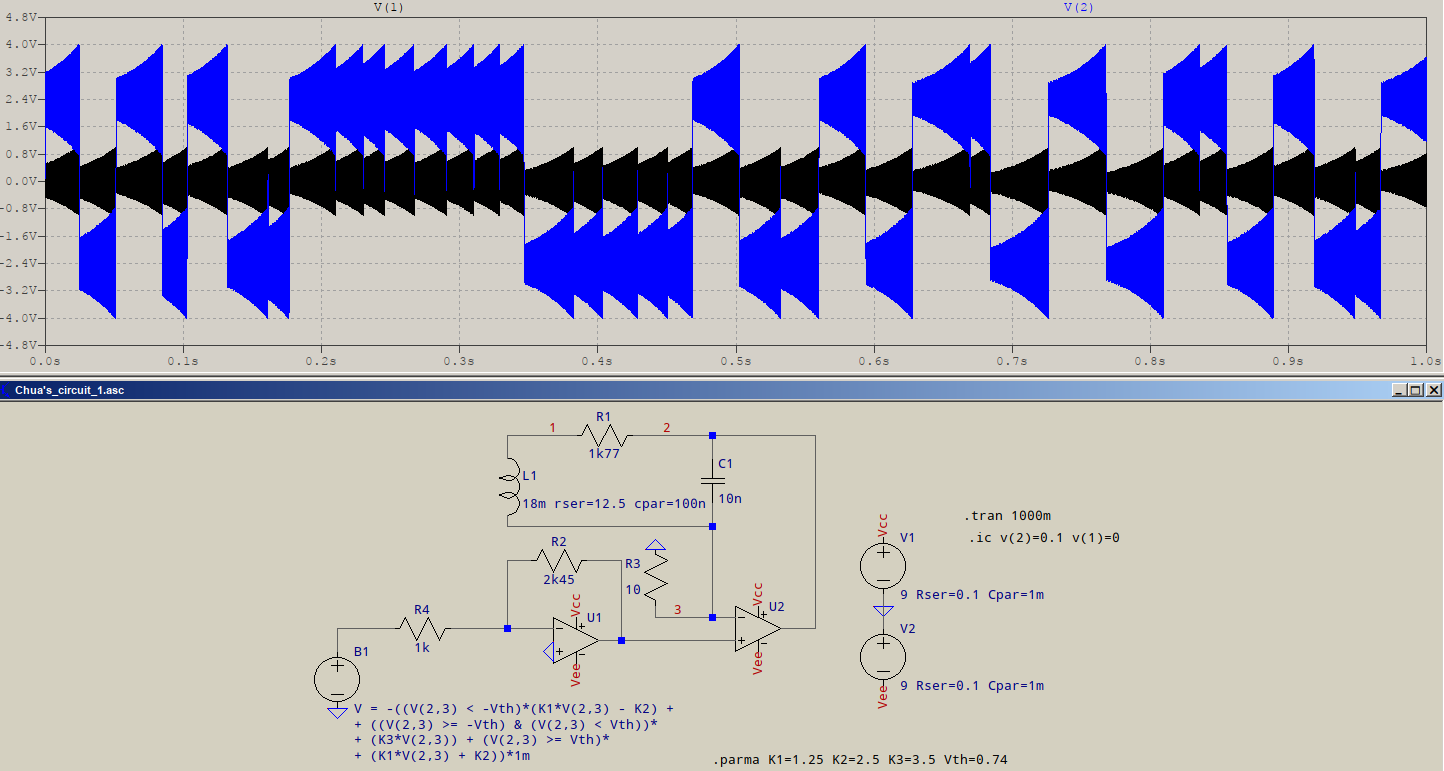 I simplified a bit the circuit, just for the purpose of making and simulating it, but it's equivalent with your values. The behavioural source also has shrunk a bit, and I made the inflexion points as defined variables, for easier modification. I modified the threshold voltage and the last (highest) inflexion point to be lower. What you see is the result. It does seem to show some randomness. Maybe it's all in the settings.

Not the answer you're looking for? Browse other questions tagged operational-amplifier oscillator ltspice saturation non-linear or ask your own question.

13
Why do we get only one frequency as output in oscillators?
3
Circuit LTspice implementation not working

5
Op Amp analysis at the output
6
Simulating real world transformer with LTSpice
0
Pulse-excited integrator reaching infinite potential?
3
Solving an Op-amp circuit
3
How to determine current limiting resistor values for push pull amplifier driven by op amp?
0
Op-amp and ideal diode problem: determine Vout as a function of Vin
1
How to measure the current delivered to the load by a high voltage (>50 V) non-inverting op amp amplifier?
0
Schmitt trigger with 741 op-amp not behaving as in simulation
2
Will a resistor fixed just in front of an op amp change its gain?