Arduino high side driver with up to 30V

I am experimenting with the circuit for an Arduino high side driver from Nick Gammon: 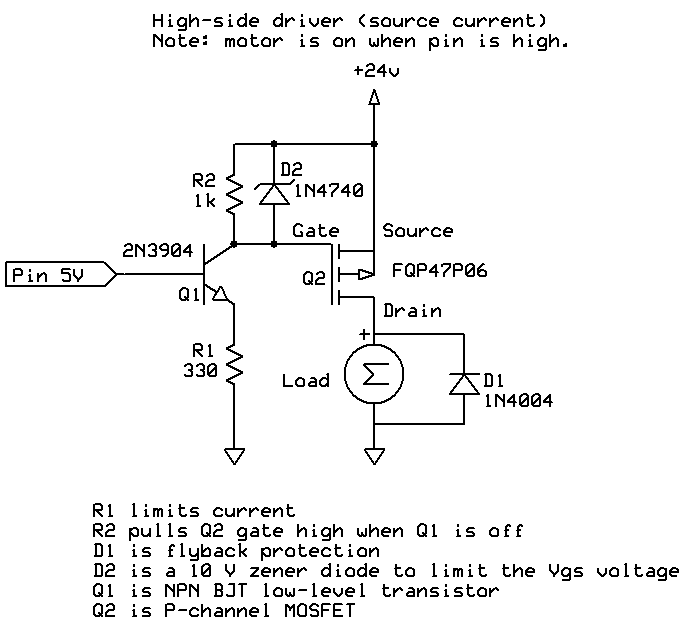 I need the circuit to work with a voltage range from 22V up to 30V and ideally stay cold. Everything else is fine, the MOSFET handles high currents without problem, but my problem is with the npn-transistor - it just gets extreme hot, especially at 30V. I am using 2N2222.

Can the circuit be adjusted in such a way that there will be no need of heat sinks or more powerful elements?

EDIT: After the suggestions of @Nick and @Edgar I changed R1 with 1.2K and R2 with 4.7k. Now the circuit is running for ~45 min without a problem, and is much cooler, I can even touch the transistor :)

I maybe had to better explain what I meant by 'extreme hot' - after a couple of minutes the thermal shutdown kicked in. That hot.

I am also considering switching to MOSFET-only solution, based on Figure 3 site 2 in this application note from Vishay: 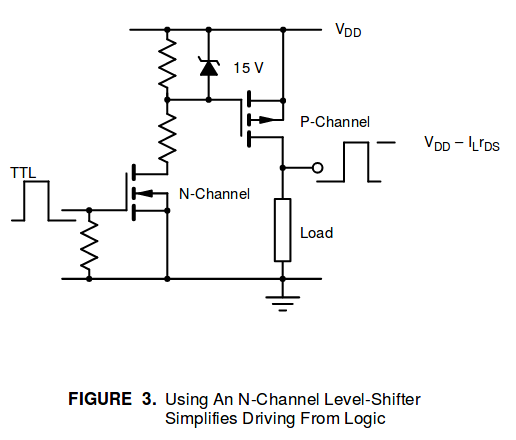 Setting the divider to 4.7k/15k should give me less than 2mA through the N-MOSFET ( I made it and it works like a charm!) so this should be even more cooler. It also should be able to handle even higher voltages without the zener, but I suppose it doesn't hurt to leave it as a surge protection.

The current through the transistor is controlled by R1 so I would suggest increasing that somewhat in this case. Perhaps to 1k or 2k. If D2 conducts then you will have a (roughly) 30V drop over 330Ω which would be 90 mA, and therefore 2.7W of power dissipation, which is more than the transistor is rated for.

Following on suggestions from @dim I propose an alternative schematic: 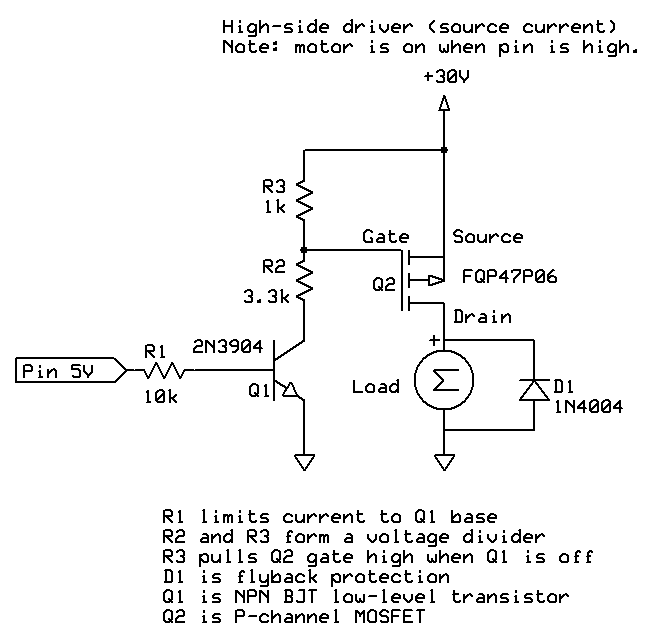 In this case, if Q1 is conducting, then R2 and R3 form a voltage divider:

Current through Q1 (Ic) would be only 7 mA so it wouldn't get hot. Current through the base would be about 0.5 mA which is well within spec for a microcontroller output pin.

The NPN transistor Q1 would need to be chosen such that its collector-emitter voltage (Vce) was in range. The 2N3904 has a absolute maximum of 40V, so 30V there (if Q1 was not conducting) would be acceptable. A PN2222 would be marginal (its maximum Vce is 30V) however the PN2222A could be OK (Max Vce of 40V).

The above would be a bit marginal at 22V because the output of the voltage divider would be:

This 13mA is pretty much independent of your variable 22-30V supply, which is a nice feature of the design.

If you decide you need 3mA in the zener, you can't reliably increase R1 so much without losing safety margins; double it to 680R giving 6.5mA, 3-ish for the zener and 3-ish for R2; making R2 somewhere around 3.3K.

0
Solid State Switch for magnet DC Generator
0
Selecting MOSFETs for Motor
3
Floating charge pump for high side N-channel MOSFET bias
6
P-channel MOSFET as high-side switch gets hot
0
Isolating a MOSFET with an optoisolator
3
How to prevent MOSFET from operating in high resistance part of linear mode?
2
MOSFET for 5V high-side switch
0
Wide voltage range comparator (with zener diode)
0
How to calculate base resistor of a NPN transistor that drives a MOSFET?
3
MOSFETs in high voltage low current applications