I configured a pin on my micro-controller(STM32F4-discovery) as an open drain and I wanted to connect it to a 5V pull-up network and drive an LED. The output of my pin is 3V so hence I wanted to pull up the pin to another voltage if I have another device that requires 5V. I am using an LED as an example to test the proof of concept, but I am confused that why it wouldn't work: 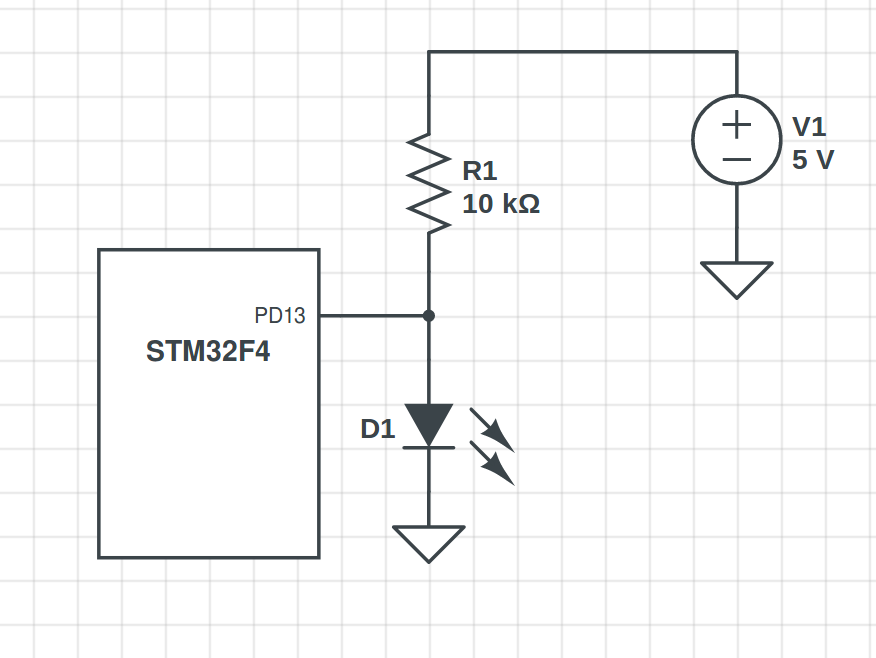 I have also been reading about Logic Level Converter recently where it can "convert" your 3V to 5V. Should I be using that instead?

The question flagged by berendi shows you what will work, but does not fully cover some relevant aspects.

As shown the simple circuit (pin connected to LED to ground and resistor to V+ > Vdd) is potentially liable to cause incorrect system operation and in some cases to damage the uC (microcontroller).
Adding a transistor to drive the LED, as shown in that Q&A set, greatly increases the flexibility available - LED current can be higher and load voltage is independent of uC capability.

Using the pin as shown will work for LEDs with Vf lower than uC_Vdd. However:

SO this arrangement CAN work for some values of "can" but adding a transistor gives MUCH better control and flexibility.

The diagram below is from StevenH's answer to the 2012 question. 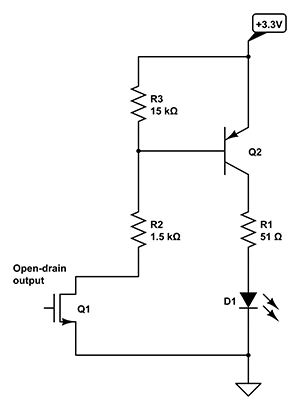 The LED supply voltage is shown as 3V3 but can be higher than Vdd subject to design of R2 and R3 values so that Vpin is never > Vdd when the pin is off/open-circuit and that Q2 received enough dreive when the pin is low.

As shown a bipolar transistor is used but a P channel FET would make design slightly easier.

The circuit below (from the 2012 question) would work as is with a standard (push-pull / high low) pin drive, or with an open drain pin if R32 was replaced with a wire and a suitable pullup resistor was added from transistor base to uC Vdd.
This circuit reverses the polarity of pin level and LED state. eg
Original - pin low = LED on.
With transistor - pin high = LED on. 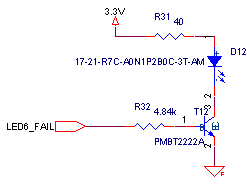 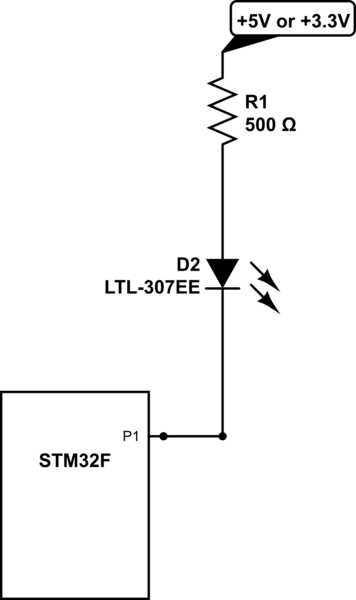 But different LED and resistor value.

Make sure you keep the current of the LED to below the spec for open drain ports and don't use too many pins in this manner.

Not the answer you're looking for? Browse other questions tagged microcontroller led stm32 stm32f4 or ask your own question.

3
Driving a LED with an open drain digital output

5
TFT display write noise
7
driving a relay with transistor and Opto-isolator
0
stm32f103c8t6 : Problem in PWM generation on timer output channel
1
Control multiple LEDS with one PWM pin?
0
Why is my drain circuit always drawing current, regardless of MOSFET gate state?
0
Read state from LED in another circuit
2
Big voltage drop across MOSFET with LED strip load
0
Why might an N MOSFET switch output flip with no change in gate voltage (and then stick)?