My question is what makes the equal and opposite voltage in an inductor to fall gradually ?

electromagnetism inductance
Share
Improve this question
asked May 19 '18 at 19:48

When an inductor is connected with a voltage source we get equal and opposite voltage on inductor against the source voltage.

That equal and opposite voltage gradually decreases with time which allows the current(caused by the source voltage) to rise gradually.

It doesn't in the ideal case, see above.

In practice, the voltage source might have a significant output impedance, which will cause its voltage to drop as the current increases. But note it's the increase in current that causes the voltage drop, not the other way around.

The inductor (unless it's superconducting) will also have some resistance. There will be a voltage drop across this resistance. Even with an ideal voltage source, the voltage across the inductive part of the inductor will fall, and so the rate of current rise will slow. Eventually, the current will rise to the point that all of the source voltage is being dropped across the resistance, and the current stops increasing.

Whether the voltage drops on the source would depend in practice on how fast the source can follow a changing load. It is the current that is changing during the initial "energizing" time period for the inductor. This might appear as a voltage change at the source if the source cannot follow the changing load fast enough.

The "energizing" of the inductor means energy is input into the process of creating magnetic fields around the inductor, which takes some time. The energy storage and release mechanism of an inductor is essentially the creation and collapsing of the surrounding magnetic fields, respectively. These processes take some time which corresponds to the "gradual decrease" being observed. 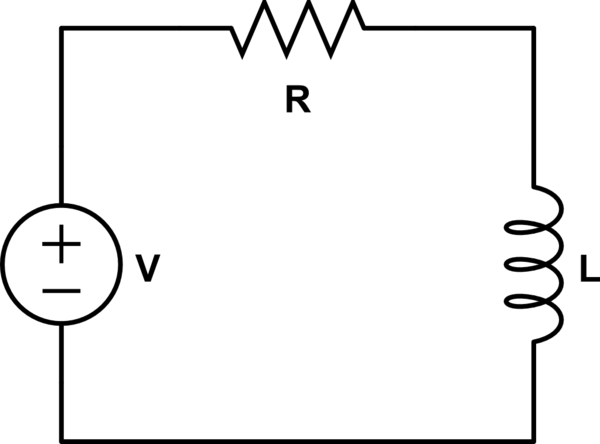 If R is 0 ohms then voltage across the inductor is constant. Let i be the current in the inductor, and suppose i=0 at t=0.

So, current rises at a constant rate to infinity, and voltage across the inductor is always constant.

In a real circuit, R is not zero, so:

When an inductor is connected with a voltage source we get equal and opposite voltage on inductor against the source voltage.

That equal and opposite voltage gradually decreases with time ...

...which allows the current(caused by the source voltage) to rise gradually.

No. The current started rising gradually the moment the voltage was applied. The back EMF is given by \$V=L\frac{dI}{dt}\$. For there to be a back EMF, there has to be a changing current.

My question is what makes the equal and opposite voltage in an inductor to fall gradually ?

I wonder what makes you think the back EMF from the inductor falls below the applied voltage?

In the circuit theory model of inductors, the applied voltage and change of current are always related by \$V=L\frac{dI}{dt}\$. One does not cause the other, they both occur at the same time.

There is a deeper model for an inductor, that of a shorted transmission line. Let's put some figures on it for the sake of illustration. Say we have a 100 ohm transmission line with an electrical length of 10 uS, shorted at the far end, and apply a step 10 V to it.

At t=0, a current of 100 mA will begin to flow, while a +10 V + 100mA step is launched into the line. After 10 uS the step hits the far end and, finding a short circuit, which allows any current but zero volts, reflects a -10 V + 100mA step. The current in the s/c at the end of the line is now 200 mA. After another 10 uS, the step reaches our launch point, where it finds a short circuit, the zero output impedance of our voltage source. It therefore reflects a +10 V +100 mA step into the line. The current supplied by the source now rises to 300mA. Rinse and repeat, indefinitely.

As the wave travels the length of the line and back, you can see that the current in the line is rising by 100 mA every 10 uS. The shorted line is behaving as an inductor, with a rate of current rise proportional to the applied voltage. The inductance exhibited is proportional to the line impedance, and to the length of the line. We can increase the line impedance and reduce the length while keeping their product constant to get the 'steppy' current increase as smooth as we like.

There is a model deeper than transmission lines, but it's quantum mechanics, with photons being emitted and absorbed to transmit the electrical effects, and I'm frankly not up to that.

Not the answer you're looking for? Browse other questions tagged electromagnetism inductance or ask your own question.

0
How does an inductor generate back emf equal to a source driving it?
2
Why does current flow in circuit when dc voltage is applied to inductor?
2
In AC RL circuit why does current increase when voltage decreases?
1
At t=0 the voltage across the Inductor will immediately jump to battery voltage. Why?
0
Boost converter Inductor Current
2
If induced voltage (back-emf) is equal and opposite to applied voltage, what drives the current?
0
Back EMF in an inductor with an AC supply
1
If the self-induced EMF in an inductor is 180° out of phase with source voltage, shouldn't they cancel out and net voltage should become zero?
2
Current waveform in an inductor with AC source