For fun, and as an exercise in reverse engineering junk hardware, I am trying to understand the internals of an HP DeskJet 840c printer from 2001.

Specifically I am trying to understand how the motor controller works, with the goal of being able to send my own signals to its input pins and drive the 2 brushed DC motors and the stepper inside the printer.

The motor controller is made by TI, but googling the identification codes yields nothing useful, so I suspect this chip was made specifically for HP. I also tried to find similar parts on the TI site, but nothing came up. 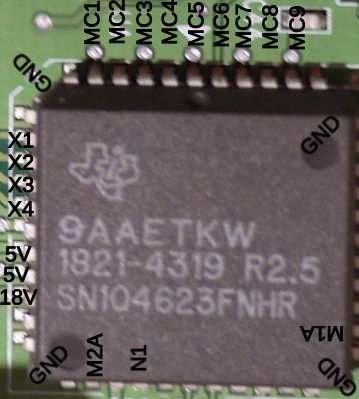 Using a logic analyzer I capture the signals exchanged between the drivers and the CPU when one of the DC motors is running. The CPU seems to send a constant stream of "packets" with 1000ns period (even when the motor is not running). Each packet is divided in 8 intervals of 125ns each, which I tried to attempt to interpret as byte values. There are patterns, for example most packets start with 11 and end with 01 but apart of that I could not make any more sense of the protocol, other than identifying which sequences seems to tell the motor to move left or right, or stay still.

My next step would be to inject my own copy of the input from a separate microcontroller, to see if the driver accepts it.

But before going ahead with that I would prefer to understand the protocol, so I know for sure what I'm asking the driver to do, instead of just having to copy what I get from the analyzer.

Can anyone help identify the motor driver and find a datasheet for it, or at least understand if the control protocol is something standard that I can learn ?