Why does the Slipring Motor speed increase with a decrease in resistance?

With induction motors, we know that the speed depends on the number of poles and also the supply frequency. Now, the slipring motor is also an induction motor and should follow the same principles, but it doesn't and that confuses me.

How does this happen and why does it happen? Also, does this mean that the resistance of the rotor circuit affects the speed of the motor?

The performance of an induction motor in relation to the rotor resistance is explained by analyzing the equivalent circuit. The complete development and analysis requires quite a few textbook pages with numerous equations and diagrams. Here are the essentials related to this problem from Fitzgerald, Kingsley, Umans, Electric Machinery 4th ed.:

The equivalent circuit is simplified to eliminate the magnetizing branch that would appear between a and b in the diagram below.

The torque vs. speed curve can be drawn from the above equation. Note that q1 is the number of phases and omega s is the synchronous speed in radians per second. 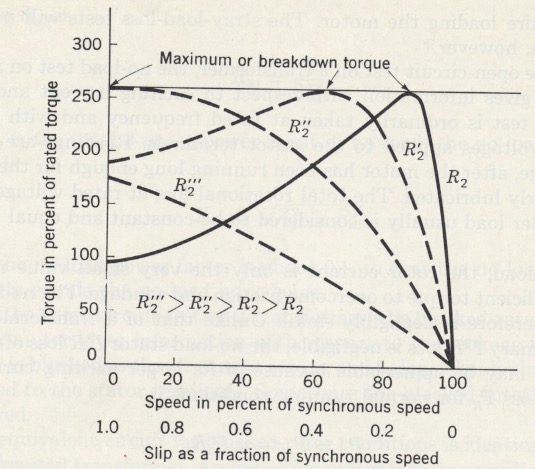 With induction motors, we know that the speed depends on the number of poles and also the supply frequency.

Adjusting the resistance affects how much slip is present between the motor speed and synchronous speed, amongst other factors.