I need to design a circuit to delay an input signal by a given amount of time (around a second, trimmable). The delay should be set through the use of passive components (resistors or capacitors). The input signal is basically a TTL level that goes high at a certain time, stays high for some time (100ms should be nice value), then goes back low.

I cannot use a micro or other programmable device because the firmware certification process is too expensive.

I realized a working solution that uses an RC network feed into a Schmidt triggered comparator (with a fixed voltage reference placed in input against RC voltage level). I'm not very satisfied with this solution for two main reasons: 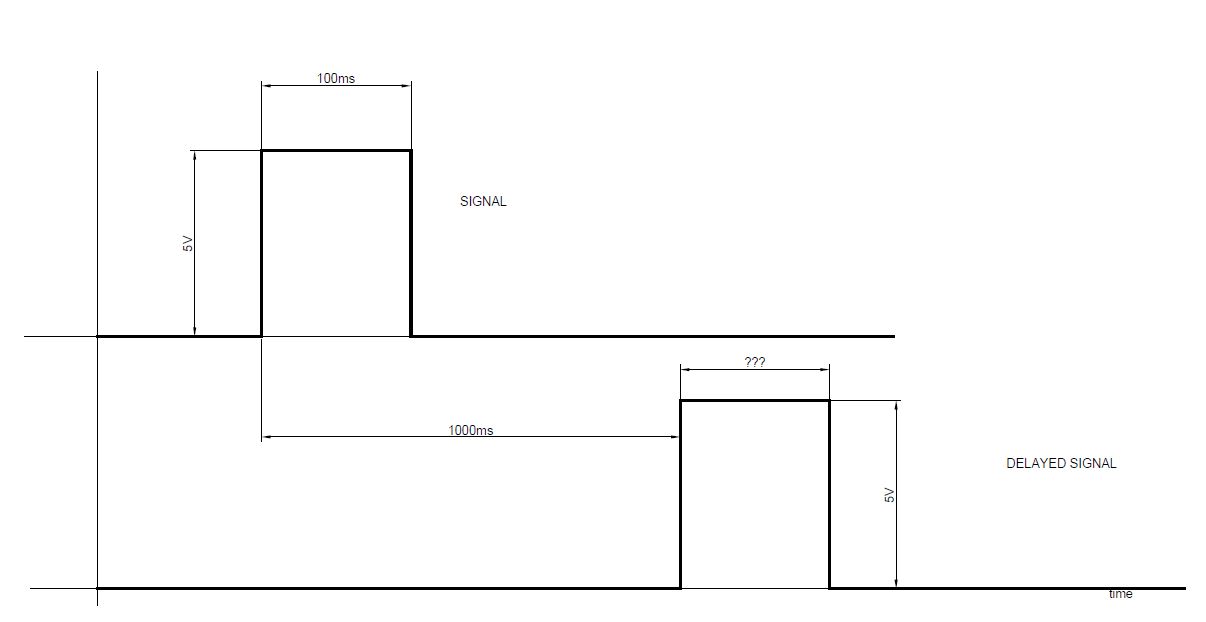 The Analog Devices / Linear Technology LT6993-1 (see circuit below) is a positive edge triggered pulse generator that has a resistor-programmable clock frequency and a resistor programmable divider value and polarity, with delays up to 33 seconds with ~3% accuracy.

The circuit below (from the data sheet) shows how to use two of the chips to generate a delayed pulse in response to the rising edge of an input pulse. The resistor values would need to be adjusted to match your required delays. Suggested DIV resistor values are shown in the table below the circuit. 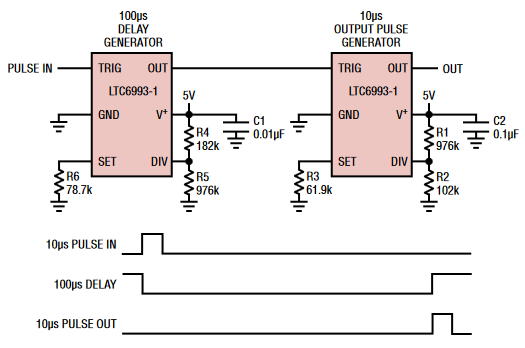 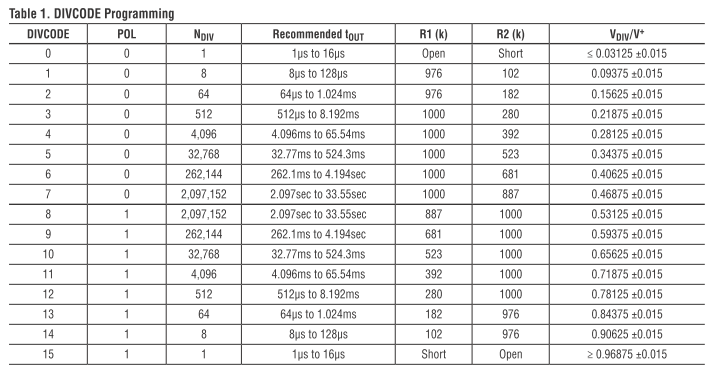 Custom Silicon Solutions makes the CSS555C, which is a 555 timer married to a wide counter. It allows you to count multiple timer cycles to use reasonably sized resistors to generate really long delays. It has a trimmable internal capacitor to tune the delays, so it doesn't even need an external capacitor.

The circuit below shows the multi-cycle monostable mode. You would need two of the chips. The first chip would generate your 1 second delay and the second chip would be triggered at the end of the delay to generate the 100ms pulse.

If you google "CSS55C price" you can find sources where you can buy the part. 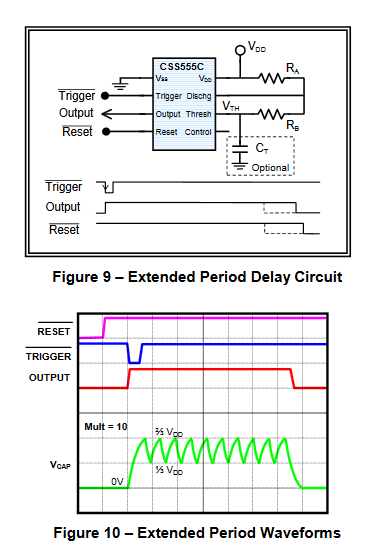 Page 14 of the Texas Instruments 74LS123 app note has an example of a digital delay circuit using both halves of the '123. You can adjust both delay and output pulse width by varying the values of Rext. If you don't need to randomly terminate the output pulse you can tie the 'B' inputs and the clear inputs high.

I realized a working solution that uses an RC network feed into a Schmidt triggered comparator (with a fixed voltage reference placed in input against RC voltage level).

This is indeed the very standard way of implementing a delay in a digital circuit.

I'm not very satisfied with this solution for two main reasons:

Well, just use a larger R, then! The delay is defined by the the product of R and C, so you can trade one for the other - and large-valued resistors are easier to get exact than large-valued capacitors.

So, maybe replace your ready-made Schmitt trigger with predefined hysteresis boundaries with a trigger with a high "off-to-on" threshold and a low "on-to-off" threshold.

Another 2-chip solution. The advantage of this approach is the continuous clock which can be measured and adjusted, possibly easier than timing a one-shot event.

The other two gates form an RC oscillator, values shown should put it about 8 Hz for a 1 second delay, and 125ms pulse width. 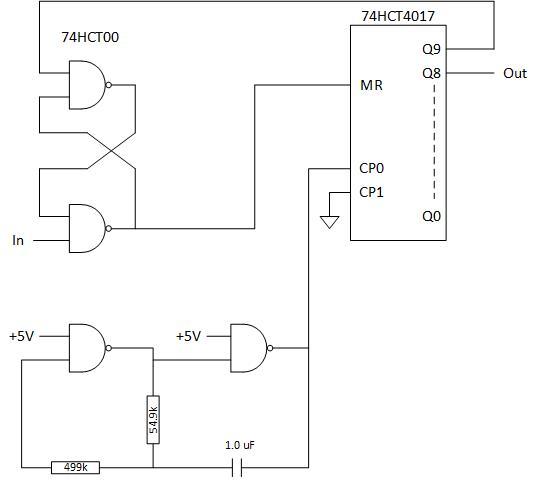 The 74HC4538 is one I've used often. 1 second is up at the end of its range. This is a one-package deal, since it has two separate units. The first would provide the delay, and its output would drive the second, which would produce the final pulse width.

To be clearer, perhaps: the first would be configured as a positive edge-triggered unit, and its Q output would drive the second one-shot which is configured for negative edge detection. The period of the first would be one second, and the second unit would have whatever pulse width you want (within reason, of course - probably less than a second would be good.)

And if you're worried about interfacing TTL to CMOS, don't be. Assuming the CMOS is the only load on a TTL output, adding a 1k pullup resistor to +5 will do the trick with no fuss.

Not the answer you're looking for? Browse other questions tagged delay or ask your own question.

1
Create a pulse that is active from ~0.3 to 0.4 times the clock period
1
Delaying a TTL signal on the falling edge