I am trying to understand FM transmitter circuit working basically on how a signal is imposed on to the carrier signal. I would like to get an acknowledgement on whether my understanding is correct or not. Next, I have got a few questions.

Here is my circuit - 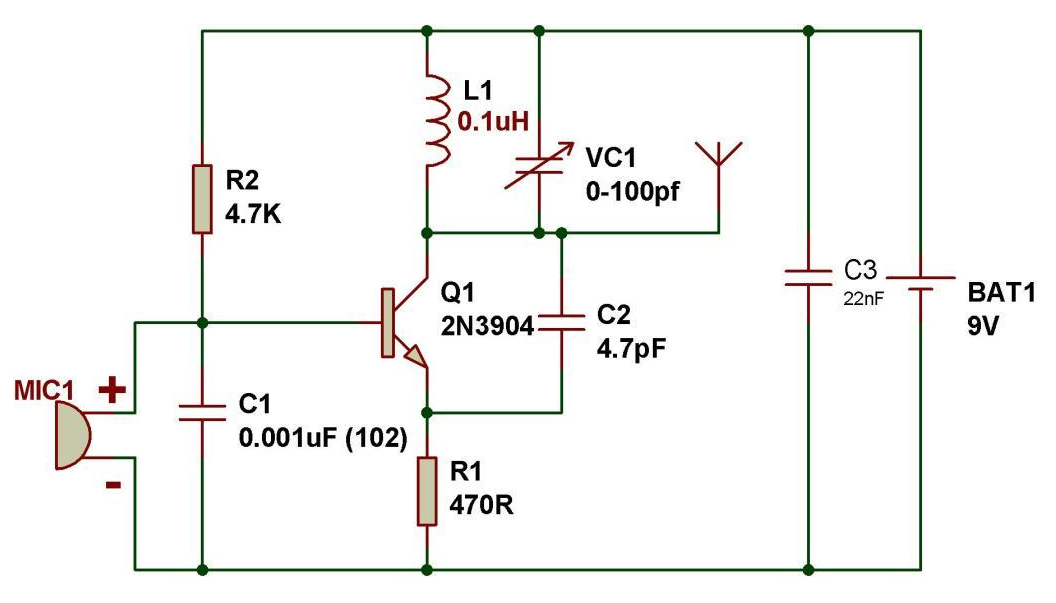 1) The L1 VC1 is basically a tank circuit which is creating a high frequency signal because of storing and releasing of the energy stored inside L1 or VC1 and this process is repeating and changes the polarity each type. Thus, we get a high frequency sinusoidal signal.

2) This L1C1 is connected to a battery voltage - 9V. Thus, it will not have any losses.

Here is my diagram on this understanding. 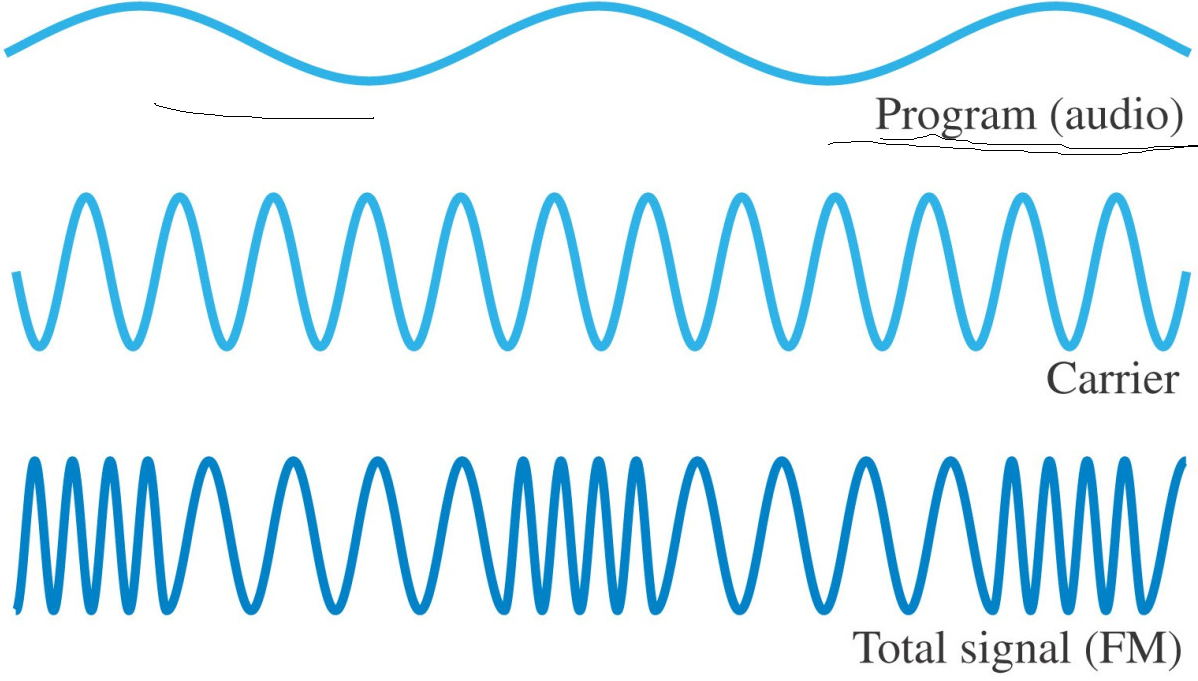 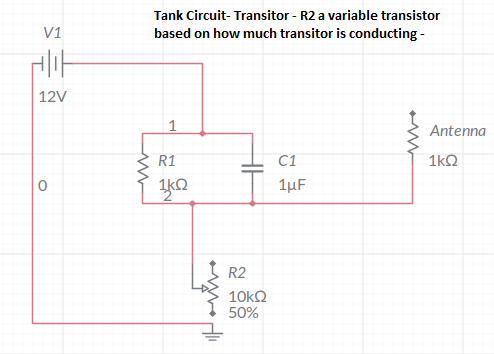 Question - Since Antenna is nothing but a wire with some resistance. But this wire isn't connected to anything. Thus, it is like an open circuit. If it is an open circuit then why does the signal passes to the antenna?

Your understanding is flawed but redeemable. Firstly there is a subtlety in this type of design that is usually missed by beginners. It's called the miller capacitance. That internal transistor capacitance occurs between base and collector and is actually alterable by the base-collector voltage. This means that an audio signal on the base (from the microphone) will alter this capacitance AND because this capacitance is massively connected to ground via C1, it also modifies the tank resonant frequency (via C3 or the battery's low impedance).

You might think about this and say but hey, if the base is held constant then this effect happens throughout each cycle of the oscillator's output voltage so what problems might this cause. Yes, it does and this basically causes a non-linear sinewave carrier to be produced but, it's still modulatable by the audio.

This L1C1 is connected to a battery voltage - 9V. Thus, it will not have any losses

Sure there are losses but the capacitor C2 steals a bit of that energy and feeds it to the emitter to make it into an oscillator. Turning a simple LC into an oscillator means that the losses are replenished each cycle and so oscillation is sustained.

Since Antenna is nothing but a wire with some resistance. But this wire isn't connected to anything. Thus, it is like an open circuit. If it is an open circuit then why does the signal passes to the antenna?

The antenna may at first seem to be just a wire but consider that at 100 MHz (typical FM broadcat band) the signal wavelength is about 3 metres and a quarter wavelength is about 75 cm. It's no coincidence that FM monopole antennas are about 75 cm long because they nicely "interface" with free space (air, a vacuum, the gap between earth and Voyager 1 and 2) and convert regular electricity nicely into an electromagnetic wave.

And the theory could go on and on but I don't intend to do that because you need to look into this yourself if you are interested.

You are correct to say that this very simple circuit has audio to cause the transistor to conduct more and conduct less which makes AM and the change in the transistor's capacitance causes FM. Most FM radios ignore the AM.

It has some problems:

1) Its radio frequency changes as the battery voltage runs down because it is missing a voltage regulator IC.

2) Its radio frequency changes if something moves towards or away from its antenna because it is missing a buffer transistor to isolate capacitance changes at the the antenna from the oscillator.

3) It will sound "muffled" like your stereo with its treble tone control turned all the way down because it is missing pre-emphasis that all FM radio stations have and all FM radios have matching de-emphasis.

in addition to the fine answers, it is important to understand a wire is not just a resistor, in fact it is mainly an inductor depending on length to diameter of wire ratio often about 0.5 to 1nh per mm.

It also has some so-called self-capacitance that you cannot directly measure because there is only one "electrode" to free space dielectric (air). So due to frequency transmission delay reflection properties, the antenna at short lengths is an inefficent radiator then becomes an impedance transformer from ~>1/20 wave and up with free space impedance of 377 Ohms with match at 1/2 wave and impedance inversion by relections at 1/4 wave

So in this circuit, it adds another pole frequency and resonance to the tank circuit which ends up dominating the visible tank circuit in the schematic since it is not buffered.

So look at @Audioguru 's and Andy's description, study Antenna Theory and try a better design.

Not the answer you're looking for? Browse other questions tagged transistors bjt antenna fm or ask your own question.

0
How frequency is modulated in FM transmitter circuit

11
How is this circuit for interfacing 20V signal with 3v3 microcontroller
3
Would you explain the output waveform of this FM transmitter circuit?
1
Does circled transistor or capacitor value cause buffer stage to stop transmitter from working?
1
Will this receiver work?
2
Behaviour of Voltage on Base in a fixed BIAS Common Emitter Amplifier
1
Collector-Base capacitance in simple FM transmitter
0
Biasing in this FM transmitter
0
Hidden wire detector using BJT transistors