I'm trying a few exercises with transistor circuits that are later to follow with an amplifier circuits exercises, but although I'm following the instructions that my university has provided and theoretically all the numbers are right, in the PSpice the circuit doesn't quite come out right. 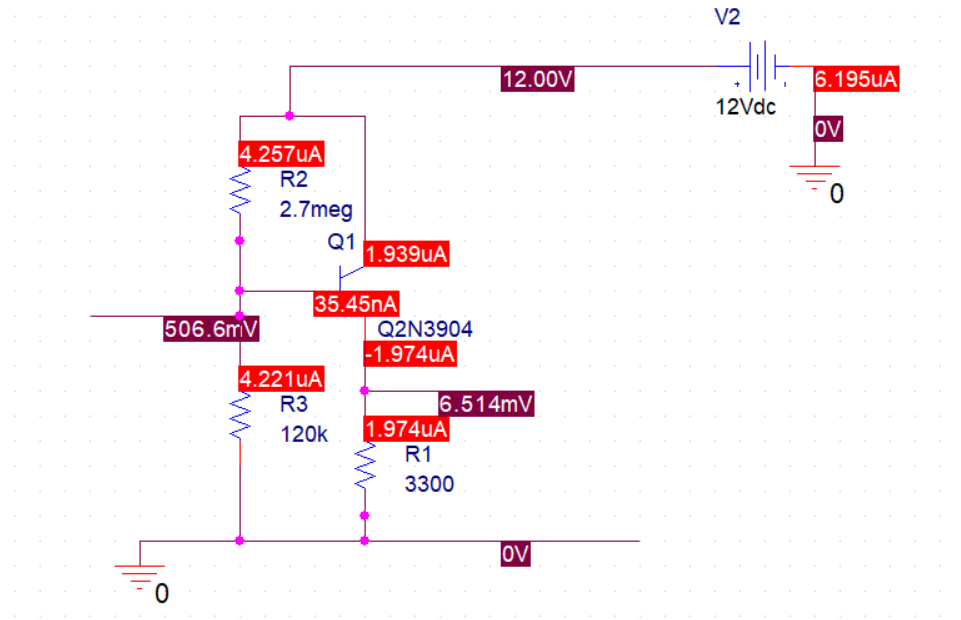 We are to assume the Ic would be 2mA and for the Ve to be 6V, and I calculated everything else according to that, but then Vce seems to be intent on being almost the whole source voltage. Also, I'd hoped for the Ib to be between 4-5uA, so I guess everything just went wrong. I even tried to recalculate both R2 and R3 by assumption that the voltage across R2 is 5.3V ('cause if there would be 5.3V across R2, then Vbe assumed to be 0.7, then the 6V across the R1, that would add up) and its current to be I while R3's current to be I-Ib, but I still got the same values.

I tried doing another exercise, one that I'd done before at a university computer instead of my own laptop, just to check if maybe this one circuit is being wonky, but the same thing happened, Vce ended up being over 75% of the source voltage, while I clearly remember that circuit working alright when I'd done it before. Can it be something to do with the PSpice model parameters? It even says that the Bf is 416.4 by default while in the transistor's datasheet its maximum is 300, so maybe something else went wrong in there?

Or what are the other ways to make PSpice to listen when I need the voltage across R1 to be 6V and the Ie to be close to 2mA? Any tips? Any advice? What did I mess up, what do I fix?

transistors pspice
Share
Improve this question
asked May 23 '18 at 11:17

If you want Ve to be 6 volts, then the base voltage must be in the vicinity of 6.6 volts in order for the base-emitter junction to be forward biased. You must change your voltage divider ratio to produce this, rather than 0.5 volts.

Once you've done this, as others have noticed, you must decrease the resistor values to provide enough base current.

You are on the right track, but your resistance values are too high. Remember that the 2N3904 has a hFE of only about 20 at low base currents, so to get 2 ma of emitter current you will need 100 uA of base current. Try lowering the values of R2 and R3 so that your bias current can provide this base current.

Can you show us your instruction? Because maybe you will need to change your university.

Because normally we are using this method:

Tha base current is smaller than:

So the voltage divider current should be larger than this base current. Let say ten times larger.

Try this values in your simulation.

Not the answer you're looking for? Browse other questions tagged transistors pspice or ask your own question.

6
What is "Collector-Emitter Sustaining Voltage”
1
Why is the voltage across collector and emitter pushing itself to 0.7 volts?
0
Pspice Common Emitter Schematic Missing Values
5
Why is my transistor beta lower than expected?
0
Connecting an IC to LEDs - would I use a transistor?
0
NPN Collector - Emitter Voltage is 2V
0
PNP too big of a voltage drop accross Collector Emitter
1
IRF540N application issues