I was reading the datasheet for the 2N3904 transistor (NPN BJT) recently and found out that I couldn't wrap my head around the cutoff current values.

Consider the collector-base junction. Since it's reverse biased we have a reverse saturation current which goes into the collector and this is equal to 50 nA. Holes from the collector move to the base and then recombine with electrons there, thus generating some portion of the base current which is directed out of the base. So according to KCL, the emitter current must be zero or very close to it. On the other hand the emitter-base junction is also reverse biased so there also must be a reverse saturation current flowing into the emitter, so according to KCL, the base current must be a combination of the emitter and collector currents.

Either the emitter current is extremely low or I'm missing something. So the question is what really happens to carriers inside BJT when we use it in a cutoff mode.

I don't see any issue at all. Consider this: - 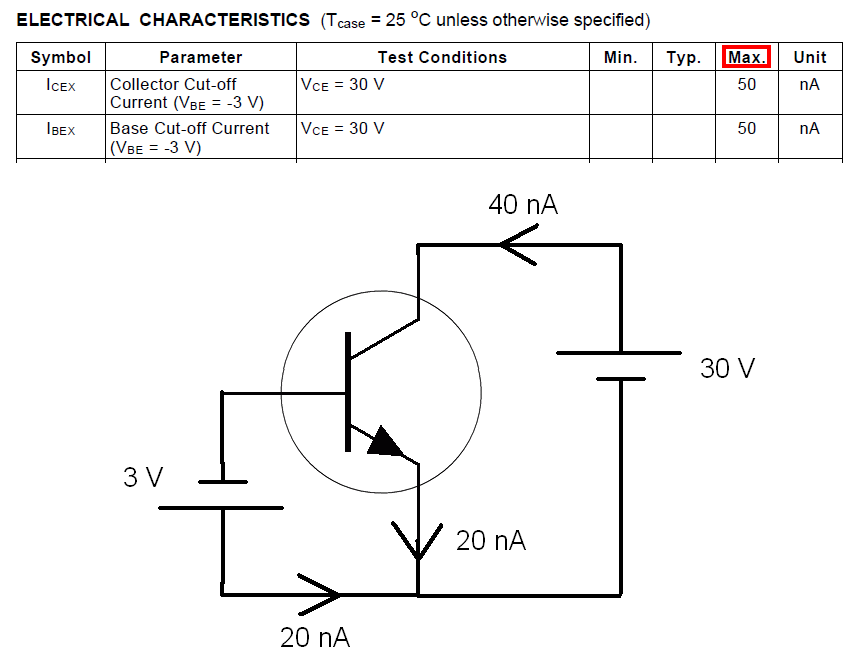 Nothing in the data sheet says these are typical values nor that they would occur simulatanously as maximum values.

Not the answer you're looking for? Browse other questions tagged transistors bjt npn or ask your own question.