I have wired this circuit up on a breadboard, replaced the zener with a constant 2.5V supply. I have also replaced R3 with a poteniometer wired as rheostat (varaible resistor)

The lowest output I can get is obviously 2.5V because thats my reference voltage.

My Vout (voltage across the load resistor) is given by what is basically the gain of my op-amp times the reference voltage. What confuses me is how the output of the op amp is being used to control the transistor (NPN). how is it that my op amp out which is going to the base of my transistor also turns out to be my Vout across the load? There is no mention of base current or anything else really to do with the transistor. I thought maybe it was over simplified and i was not expecting it to work, but it does indeed hold a steady output voltage even when I vary the load resistance. So again I ask how is that the op amp non-inverting amplifier equation happens to give the transistor enough base current to make the output also equal the result of said equation. 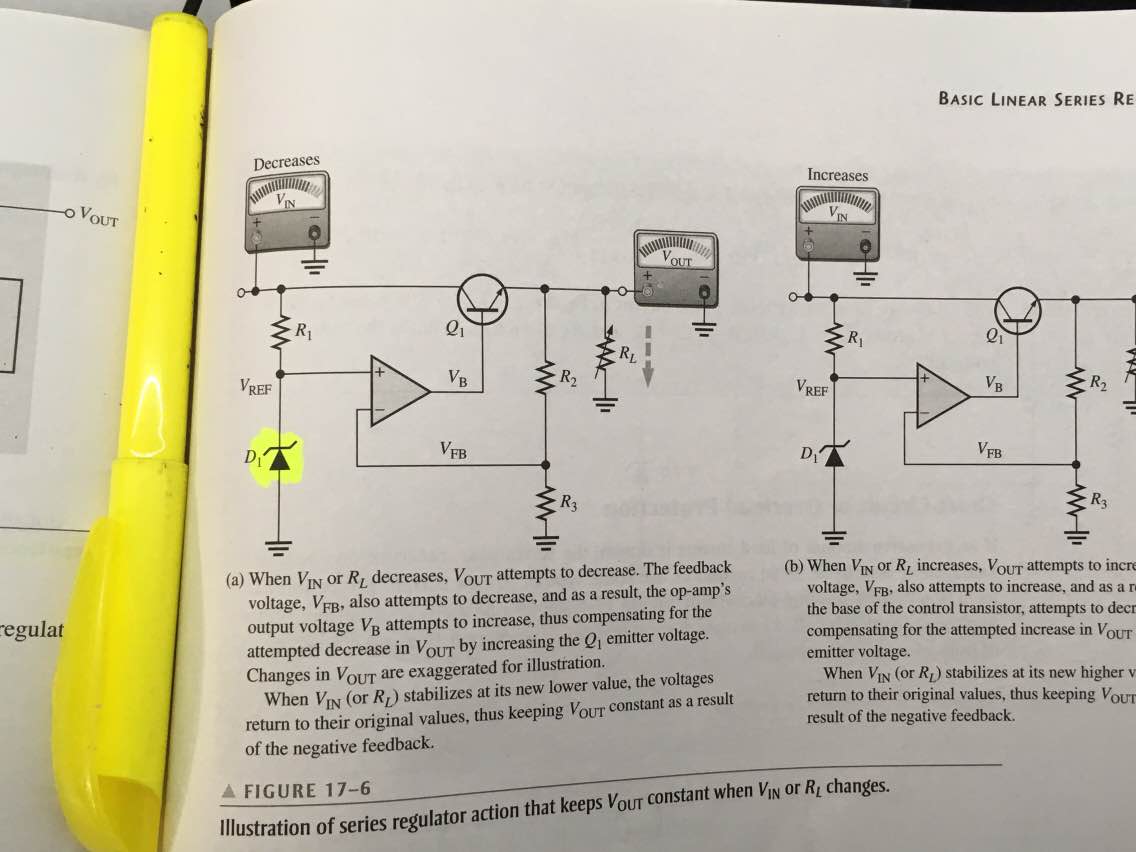 how is it that my op amp out which is going to the base of my transistor also turns out to be my Vout across the load?

Almost but not quite. The Vout across the load is the emitter of Q1, the base is going to be about 0.65V higher. You could draw a box around the op-amp and Q1, and treat them as a single unit (note that the collector of Q1 is the positive power supply, not shown on the op-amp symbol). The base voltage is whatever it needs to be, to make the emitter voltage correct — if it were any other voltage, then the feedback network R2/R3 would make VFB too high or too low, and the op-amp would have to change its output. Effectively the op-amp plus Q1 make a super-op-amp that has higher output current characteristic, and the Q1 base is just an internal node that you don't have to worry about.

If PNP transistor Q1 were not present — if the op-amp output was directly driving R2 — then the only difference in performance is that the output current would be limited by the op-amp's capability. If it were an ideal op-amp there would be no issue, but if it were a real op-amp (like the crusty old 741) then the datasheet must be consulted to find the maximum available output current. But since Q1 is present, the circuit has much more output current available. Also, since the extra power dissipation happens in Q1 and not in the op-amp, Q1 can be mounted on a great big heatsink while the op-amp runs cool.

This abstraction is actually kind of a mind-blowingly useful bit of magic, and it's why op-amp circuits are so commonly used.

The op-amp doesn't "know" whether or not it's driving the output directly, or if it's driving a PNP transistor or some other arrangement. All the op-amp "knows" is the voltage difference between its own (+) and (-) inputs. So assuming that the feedback is working, R3 must have the same voltage as D1, and since R2 and R3 form a near-ideal voltage divider, the top of R2 is regulated. Q1 just takes up the slack as directed by the op-amp.

The circuit's closed-loop negative feedback path makes the VFB voltage approximately the same as the VREF voltage. If the op-amp (+) and (-) inputs were swapped, then the closed-loop feedback path would be divergent instead of convergent. The output of the op-amp responds to the small difference between VFB and VREF, and it increases or decreases its output VB until the difference VREF-VFB is nearly zero. There is virtually no current flowing into the op-amp (-) input, so all of the current flowing in R3 is also flowing in R2.

There are performance limits of course: both the inputs and the op-amp's output voltage can't exceed the op-amp's power supply rails. And the open-loop gain drops off at higher frequencies, so the loop doesn't close as exactly. Also op-amps don't like to drive large capacitances, so attempting to drive a big power MOSFET might not always work without some series resistance. But for design or analysis purposes you can often start with the assumption that the op-amp's closed-loop negative feedback is working correctly, and let the internal nodes do whatever they must to get the correct output.

Not the answer you're looking for? Browse other questions tagged voltage operational-amplifier voltage-regulator or ask your own question.

60
Reasons not to use a 741 op-amp?
0
Discrete linear voltage regulator