I have a problem similar to Suresh @ 12V Constant voltage regulator for Car? (I want to power an electric dog fence from my car battery), and like Trevor_G suggests, I probably don't have the smarts to do a DIY solution. I get that you can't get 12v output if you only have 10v input. Trevor_G suggests instead an "off-the-shelf automotive 12v power supply." I'm not sure what type of device Trevor_G is recommending - one of those 12v rechargeable lithium battery "portable power supplies" that are supposed to power your 110v shaver while charging 6 cell phones simultaneously? The 110v AC-12v DC power supply that came with the dog fence provides 12v DC at 750mA. Assuming the unit draws 750mA, how big of a battery (watt/hours?) do I need to power it for 12 hours on one charge? (I get confused witht he math) Is this even practical? How long would I have to run my car to recharge the unit? Manufacturers don't give any data on this. Thanks. Forgive me for being an electronics pre-schooler.

voltage-regulator dc-dc-converter automotive
share | improve this question | |
asked May 25 '18 at 5:08

get that you can't get 12v output if you only have 10v input.

Indeed you can't when using a "regulator" but you can with a boost converter.

But in your case (you want 12V output while the input can vary between 10 V to 14 V) what you actually need is a buck/boost module. 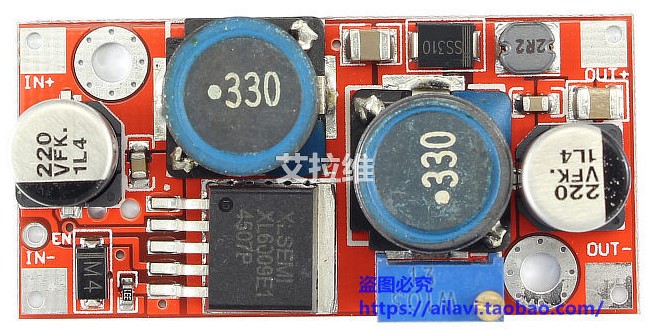 Note the light blue rectangular component, it's a potmeter. It has a screw you can turn and that will adjust the output voltage. You will need a voltmeter or multimeter to measure the output voltage and turn the screw such that you get 12 V at the output.

That means that this power supply can deliver up to 750 mA. The actual current consumption of the device will actually be a lot lower. The only way to know the real value is to measure it.

In practice I expect that the dog fence unit will consume much less than 750 mA. A more realistic estimate might be 100 mA (just my guess). That would mean that a fully charged 40 Ah car battery will power the fence for at least 2 weeks.

If you keep the battery in your car (and also use it for your car) while it powers the fence I would not run it for longer than a week as you might be unable to start the car if you run down the battery too much!

To fully charging the car battery again you should be driving around for an hour or so at moderate to high speed. I am unsure if the car will charge the battery fast enough when it is running idle.

If you power the dog fence regularly from the car I would get a mains powered car battery charger to charge the car battery instead of burning fuel for that.

Also consider using a solar panel + battery solution instead of the car's battery since the dog fence device should not consume that much power so a solar panel might provide more than enough power.

Not the answer you're looking for? Browse other questions tagged voltage-regulator dc-dc-converter automotive or ask your own question.

1
Supply power to mini-ITX from car battery
0
How the Current Flows in a Car?
0
Stepping-down DC voltage (at low current) in the presence of an audio circuit
0
Can a rechargable dash cam battery be replaced with a dc-dc converter in-place?
0
Best Battery pack solution for raspberry pi and lcd
0
Capacitor Bank Design for Electric Vehicle