What could be the issue with energy monitoring IC (HLW8012) and my non-isolated power supply?

This circuit works fine when I replace the 220v power supply with a cheap power supply(I assume they are isolated) from aliexpress. However, when I use my own power supply(schematic below), it causes the 0R resistor, fusible resistor, AMS1117 IC and HLW8012 IC to blow out with smoke. my power supply circuit is also working fine under load when not connected to power monitoring circuit. I think there is something wrong with my GND but I don't know how to solve it. Chinese datasheet for HLW8012 can be found here and some english info about it here

That means that if you connect this circuit to a PC, it's case would become live at half mains voltage. That is extremely dangerous and that's why PC cases are (or should be) grounded via the mains earth connecttion. This means that the PC's mains earth connection will short your circuit's ground to mains earth. Your power supply circuit is not designed to handle that so it blows up.

You really need to study the subject of mains isolation, why it is needed (safety) and how it is done (transformer, opto couplers, wireless).

Then browse the internet for similar (mains power monitoring) projects to learn how it is done. You will find that monitoring mains current directly via a shunt resistor is always a challenge. It is much easier to use a current transformer or a Hall sensor based module as these already provide mains isolation so they're much easier to use.

Try this for a possibility of what happens: -

Working with this kind of circuit, you need to understand the safety issues involved with a transformerless, non-isolated off-line device that is floating at mains potential.

Put it in an enclosed, double-insulated box, and do not connect anything to it without isolation - don't connect oscilloscope, PC microcontroller programmer, etc while the AC is connected.

That said, however, it is not an intrinsically unworkable or dangerous design - millions of such devices are used every day for domestic AC power metering and home automation and switching devices.

You've obviously got a short from the line active straight through the fusible resistor and one of the bridge diodes back to the neutral.

You do need your local "ground" to be mains active, for the HLW8012 to work. Your active straight from the input line, before the shunt resistor, should be connected to ground via the 0-ohm resistor. (Remember! NOTHING ELSE EXTERNAL IS REFERENCED TO THIS.)

The incoming active line should be connected to both the 0-ohm resistor to ground and one side of the 1-milliohm shunt resistor, and nothing else. (Not even sure why you need that 0-ohm resistor.)

Connect the other side of the 1-milliohm shunt to the active wire to the load.

Connect the neutral wire to the load neutral, as well as to the 8.2-ohm fusible resistor that feeds the switcher. Also connect the string of 470k voltage-sense resistors to the neutral.

Get rid of the bridge rectifier. Put a single diode in series from the neutral line (after the fusible resistor) before the LC pi filter.

Other than that, I think you're on an OK track for success.

I suggest to use transformer to separate the input ac voltage form your dc GND like done in this famous AC/DC module (THX208 - PWM Switching Power Supply Controller) at the this circuit photo (U6 tarns) : 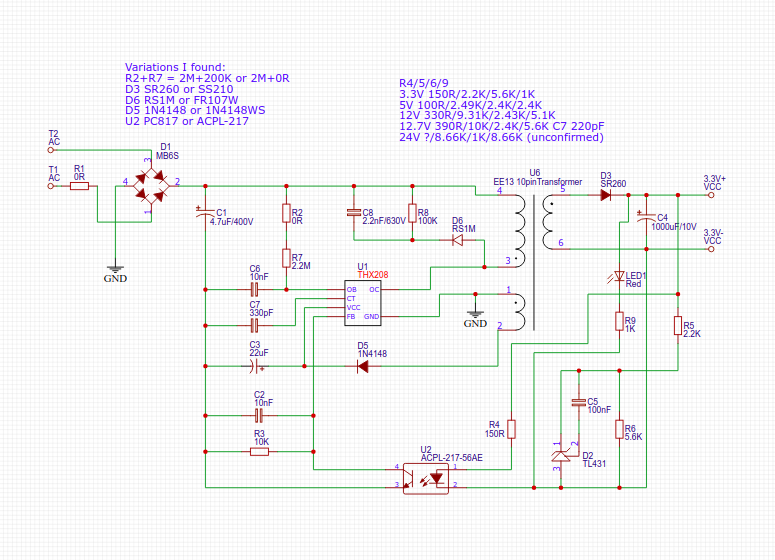