What does BSC SQ mean?

I'm reading this DAC datasheet. The last page (p. 32) gives certain of the chip's dimensions, some in units of "BSC SQ". 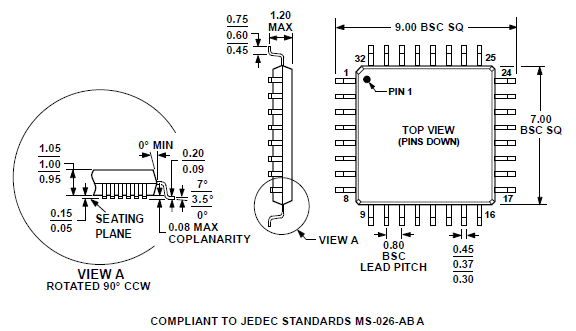 What does BSC SQ mean? Is it standard to express sizes in BSC SQ?

BSC means "Basic Spacing Between Centers". This is often used if the reference lines don't refer to a physical point or edge, like in the case of the pins: the reference is in the middle of the pin, instead of one of the edges.

The abbreviation BSC is misused in the case of the package outline, and overall dimensions, as they are specified by physical edges which can be measured.

Usually a mechanical drawing of a package will show minimum and maximum values. BSC SQ must be regarded as nominal, so may deviate, but it doesn't say by how much.

In its most generally used form "BSC" means "distance between two nominated points.

"BSC SQ" when referring to an IC package means that the side is BSC units long and that the package is "square" so that the side at right angles to this one is the same length.

The words may literally stand for "Basic Spacing between Centers" but the term is used even where there are no specific centers involved (as in eg the package side measurement in the example given).

Where holes are involved the distances are measured between the centers of the holes.

Where eg pins are used the distances are between the centers of the pins.

A side or other dimension that has nothing to have a formal center means that the dimension is measured between the mean edge locations.

Some explanations say it stands for "Basic Spacing between Centers" but that seems to be more an attempt to put meaningful words to the term than a genuine meaning".

Regardless - you can expect that either all the left hand edges OR all the right hand edges or all the centers of pins along an edge are spaced at a spacing of BSC within the specified accuracy tolerances. 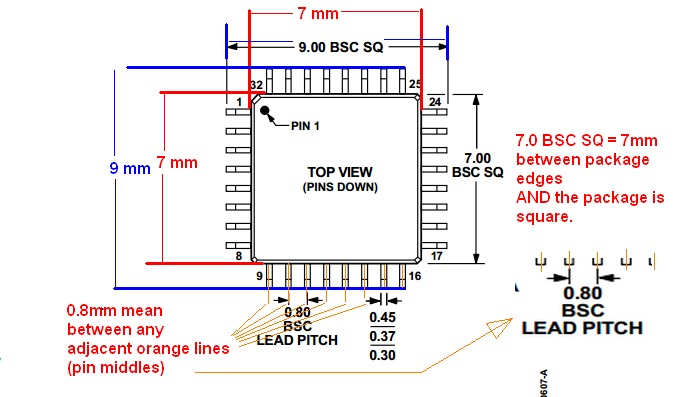 "BSC SQ" is an abbreviation for "Basic square". "Basic" has a specific meaning defined in the dimensioning and tolerancing standard (ASME Y14.5M for the curious), but it roughly means "nominal". "Square" simply means that the feature is square, so there is no need to clutter the drawing with an extra dimension for the perpendicular direction. Neither abbreviation has anything to do with spacing between centers.

To get technical, "basic" really means that we aren't going to specify the tolerance of the feature through the dimension, nor through an inherited tolerance coming from the title block. Instead, there would be a feature control frame defining the region that the part's surface could lie within. For example, something like this pointing at the side of the package:

would mean, "The surface of the package must lie within a volume 0.2 mm wide centered on the ideal location given by the basic dimensions."

I think one of the actual questions being asked by the poster, is what are the units of terms like "7.00 BSC". Since the datasheet linked has a mechanical drawing that specifies that all dimensions are given in millimeters, the units are millimeters. The "BSC" part doesn't change the units.

I've always interpreted it as meaning a 'basic dimension'... A basic dimension is an ideal, exact dimension, and as such has no tolerance. Important features of the device are often shown like this. Pitch is pretty commonly basic.

Of course the real life device won't be exact. What is ideal is what is relevant here though...

Apparently Microchip agrees with me: 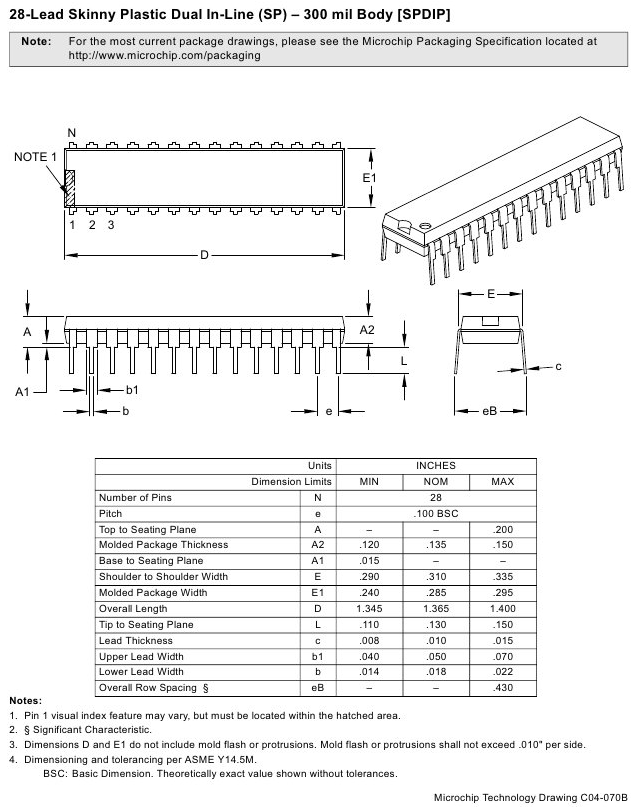 Not the answer you're looking for? Browse other questions tagged datasheet mechanical units or ask your own question.