Is this a sensbile way to switch a 12V line with 3.3V logic

I am just starting to learn about making electronic things, so this may be a foolish question. I think this is adequately different to similar questions here.

As a first project I am working on making a fan controller based around an ESP32/ESP8266 MCU (I'm coming from software development, so this feels like a comfortable route in). The fan is a 4-wire PC fan (SUNON PMD1206PMB3-A 12V 3.4W). I have a working system to send the PWM signal to control the fan speed and plan to work on getting back the fan's tacho, but am having an issue with system stability on start up that I believe is due to power stability caused by the fan drawing current while the MCU is booting. An approach that I'm thinking of is to get the MCU to control the power to the fan and only switch it on when the boot is complete (this has the advantage of allowing the fan to be turned off when the set speed is zero - the zero duty cycle oddly leaves the fan running at 20rpm).

Since the ESP32 uses 3.3V logic I cannot directly switch a MOSFET with a line from the MCU, so I was thinking of using something like this. 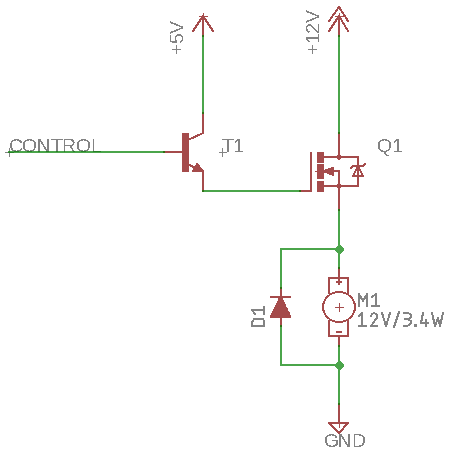 Is this a sensible approach? Is there a better way to do this?

Note that the +12V and +5V are already available in the circuit - though from looking at this related answer it appears I could draw from the 12V.

Lots of problems with your circuit:

A simple circuit that does what you want is to use a N channel FET that can be driven well from 3.3 V as a low side switch. For example, the IRLML6344 would be suitable here. It has a maximum RDSON of 37 mΩ with only 2.5 V gate drive.

Connect the motor (with diode as you show) between the 12 V power supply and the FET drain, source to ground, and drive the gate directly from the 0 to 3.3 V digital output. Yes, it's that easy:

No this is probably not a sensible approach because the N channel MOSFET is wired as a source follower and cannot therefore produce a voltage output that is any greater than the gate drive voltage. In fact, with (say) 5 volts applied to the base of T1, the emitter will be about 4.3 volts and this drives the MOSFET gate. However, the MOSFET needs maybe 4 volts between gate and source to properly turn it on so, you might see about a volt across your motor.

The better way is to use a P channel MOSFET like this: - 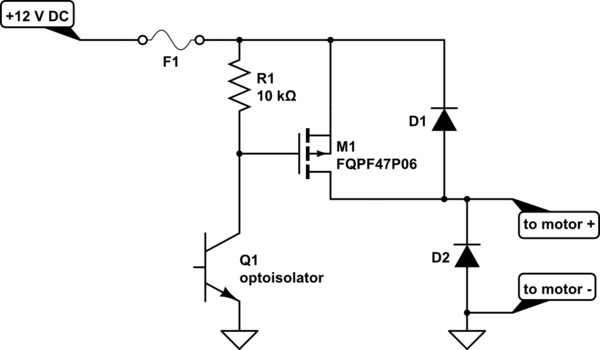 If you really need positive side switching, you will need a p-channel mosfet. These are not that difficult if you observe a few things:

The circuit below is similar to the answer described by Andy above, but using a transistor instead of an optocoupler since they are cheaper and smaller.

There are basically two approaches here which are good:

Use a N-channel MOSFET on the "low side" of the load, so the drain connects to the load and the source connects to ground.

Depending on the MOSFET threshold voltage you may be OK with direct drive of the MOSFET gate from your microcontroller, and this usually works OK in systems that don't need to be very fast or very high power. Choosing a logic-level FET (so you're confident about turning it on) is a good approach.

(In some cases like high-power, high-speed systems it's best to drive the MOSFET gate hard on, using a gate driver such as a Microchip MCP1402 IC with a 12V supply.)

It's also a good idea to put a fairly high value resistor from the gate to ground, bleeding the stored charge off the gate in case the controller circuit goes into a high-Z state, in which case the load will not turn off. A small series resistor (say 10 ohms) may also be used to dampen ringing formed by the FET's gate capacitance and parasitic inductance of the gate wiring.

OR, you can go for a high-side switch. If there's another common ground path, or you're not sure about how ground is connected, and you don't want to break the circuit there, sometimes cutting off the +12V rail is a better approach.

So we need a P-channel MOSFET.

We'll need to put a pull-up resistor between the gate and the source, say 10k, which will keep the gate at +12V. The P-channel MOSFET will remain turned off by default.

Now, when the gate is sufficiently negative relative to the source, like when VG is say below 10V or so relative to ground, VGS will be -2V or so, and the FET will turn on.

You can't just connect a microcontroller which has, say, 0-3.3V logic levels to this - the FET will never turn off. (And it may not like being pulled up to +12V on that pin.)

We need another transistor. A small N-channel MOSFET or NPN BJT. It doesn't have to be a high-power device. A 2N3904 would be perfectly fine, for example.

Connect this with the collector to the gate of the power MOSFET, connect the emitter to ground, and the base to your microcontroller circuit with a resistor.

Now, when the MCU pin goes to +3.3V, the small NPN transistor turns on and pulls the high-side power MOSFET gate down close to ground, turning it on and turning the load on.

OR... investigate the enable/PWM input signal that is provided on modern four-wire brushless PC fans.

While all the suggestions will probably work with your fan, keep in mind that the manufacturer of the fan doesn't recommend high side/low side switching in order to control fan speed. And as one of the comments suggested use a 4wire pwm fan :)

Not the answer you're looking for? Browse other questions tagged microcontroller esp8266 switching or ask your own question.

0
Using a TIP120 Darlington transistor to control a 12V fan from an ESP32 board
1
4-pin PC Fan PWM control and speed monitoring
0
Switching 12v pilot with 3.3v logic
1
How to limit pulse duration?
0
How does my fan have active tacho (RPM) output even though the blades aren't turning?