I've never built a circuit using BJTs before but I'm more inclined to go this route over FETs for this task.

From what I've learnt so far this is my intended schematic 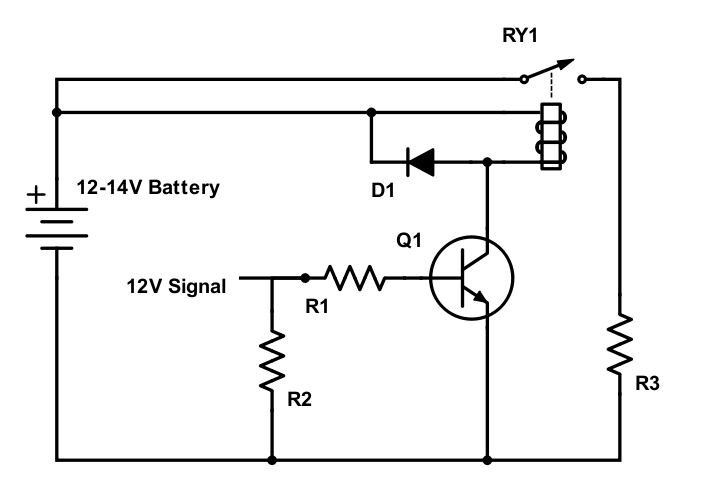 From my research into transistor theory I should be using the NPN transistor in common-collector configuration. Assuming beta = 100 (approx.) I should have more than enough signal current to saturate my transistor for it to essentially work as a switch to my relay, which I assume at this stage will need 100mA (approx.) coil current.

What I am confused about is calculating resistor values based on the BE, BC and CE voltage (assuming a 0.7V drop on BE?) and if R2 is even needed at all (I guess to act as a voltage divider?)

Any guidance that can be offered here will be extremely appreciated.

transistors relay bjt npn
share|improve this question
edited May 28 '18 at 12:10

With a \$600\:\text{mA}\$ load (three devices to be simultaneously activated), a relay may be a good choice. There are plenty of relays available rated for vehicle use. Some of the really cheap small ones that are more often used with regulated \$12\:\text{V}\$ power supplies are rated to present a transistor load of about \$320\:\Omega\$. So this would mean a collector current (coil current) that is less than \$40\:\text{mA}\$. You'll have to decide on a specific relay, though, to know for certain because these things vary from one device to another.

You've indicated no more than \$20\:\text{mA}\$ as a switching current, but I think falsely concluded that you could rely on a \$\beta=100\$ for the transistor acting as a switch. There are two basic kinds of bipolar-based transistor switches commonly used for this application: a simple BJT or else a Darlington. The Darlington will drop about one volt when switched on, so your relay would lose that much. But most relays are rated to switch just fine with that loss. The Darlington choice would likely exhibit \$\beta\ge 1000\$ in some cases but generally not for switching due to some resistors that they usually include inside. So while this is a fine choice, I wouldn't consider more than \$\beta=200\$ for actual switching. A regular BJT (NPN) would likely exhibit \$\beta=10\$ or maybe \$\beta=20\$ for switching. But I wouldn't count on \$\beta=100\$ for a simple NPN -- especially one that can handle that much collector current.

Either way, if the relay coil current is no more than \$100\:\text{mA}\$ and given that your switching signal can comply with as much as \$20\:\text{mA}\$, I think both options (NPN or Darlington NPN) are still on the table. So that's good.

Either way, your switching signal appears capable of handling the situation. Just make sure that your transistor can handle the dissipation. This will be on the order of \$\frac{1}{4}\:\text{W}\$. A TO-220 packaged device would be totally safe. A smaller TO-92 device may get hot.

Ok, let me give you some advice.

First of all, the relay RY1 is not really needed, you can connect each load to a BJT directly.

Not the answer you're looking for? Browse other questions tagged transistors relay bjt npn or ask your own question.

14
Shutdown Controller for Raspberry Pi in a car
1
Transistor saturates no matter the size of base resistor
2
BJT Transistor question help here?
2
Smoking Transistor in Low-Side Switch. What Am I Doing Wrong?
4
Analyzing a transistor relay driver
2
Voltage divider bias (BJT) leads to a huge voltage drop across the collector resistor. Why?
0
Selecting a switching transistor for a 5V relay
0
BJT cut-off currents magnitudes and directions
2
Please help me understand this bjt set up works