In the picture of the two below (larger one is from APC UPS; the one I intend to replace), there is a disparity in the size, and that worries me. 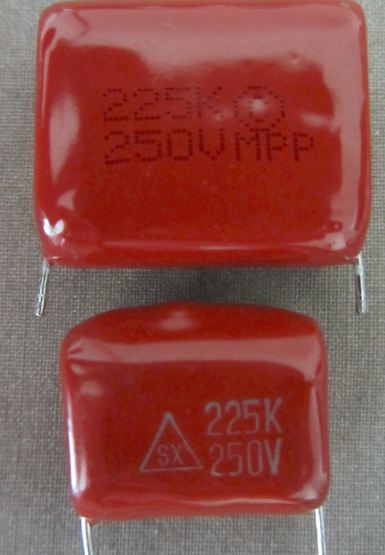 Although both are of the same thickness, the difference in the length * breadth between them concerns me, as given the same dielectric, the amount of the film determines the capacitance and ESR, among other things.

I don't have an ESR meter with me, but I measured both capacitors and they were around 2.2uF, so their values agree.

Hence, I would like to ask what the difference in size might imply as far as their characteristics are concerend, given that both measure the same value?

More importantly, would it be safe to replace the original cap with the smaller one I bought on eBay?

I wouldn't worry. Their measurement is the same, and their rated maximum voltage is the same, so it should be a drop-in replacement. There are a number of reasons why they might be different physical sizes. For example, they might not have the exact same materials (maybe one has a better dielectric, or the metal film layers in one are thinner). They could also have different geometry internally, there's no reason the layers need to be perfectly flat.

In addition to what Jim Paris pointed out, one other possible reason comes to my mind.

Sometimes it is required, by normative regulations for example, that there is some minimum physical distance (creepage) between hot and neutral or two phases. So even if the component satisfies the isolation requirements, it could be compromised if the pins are too close together.

This is often the case with optocouplers. When you want to "sense" a 230V input, there generally has to be at least 8mm creepage distance to the microelectronic side.
One of our products once failed compliance tests because of this. The pad distance was >8mm so it looked OK on the PCB layout, but if you followed the path on the surface of the component (where the pins come out of the casing) it was slightly below 8mm :| So we had to choose an alternative component with essentially the same parameters except that it had a greater pin distance.

3
Fixing APC UPS buzzing noise
8
Aluminum Electrolytic Capacitor Dissipation Factor
2
Are these two capacitors in series or parallel?
17
Why are capacitor voltage ratings such strange values?
2
Are these max-capacitor ratings (for a bridge rectifier) too conservative?
1
What are these values on this capacitor?
1
How does same capacitor with different dielectric affects the circuit?
0
Differences between 220pf 1000V capacitors
14
Why are these two electrolytic capacitors so hugely different in size?
2
A capacitor charge time - two methods two different answers