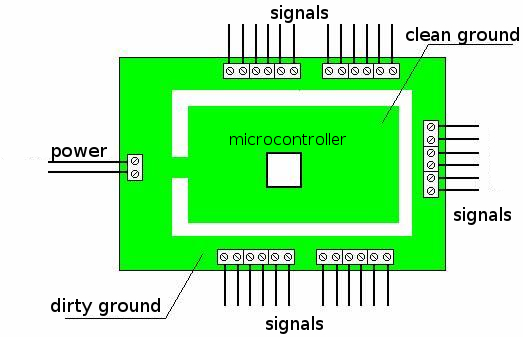 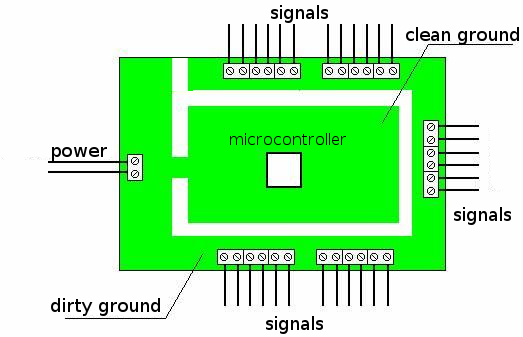 Which is better? On one hand, the first is bad because ground ring is one-turn coil, hence induction current will be appear. On other hand, the second is bad because potential in the opposite points of ground plane will differ when current is big. I'm confused.

The split ring is preferable. A ring that goes all the way round acts like a loop antenna or may act as one closed winding of a transformer. The loop antenna may radiate or pick up electro-magnetic interference and if it acts as a primary transformer winding, the circuitry around the microcontroller in the middle may act as the secondary winding and become influenced.

However, the best ground planes in the world won't solve all problems. Somewhere, you have to electrically cross the border with your signals (except if you're using optocouplers). The entire idea of splitting your board into a clean and a dirty area makes sense only if you have the drivers for the dirty signals on the dirty area, too. Therefore, it is important to consider what the interfaces between your clean and dirty areas look like. If for instance, you drive the signal from within your clean area, and have the ground return on the outside, you win nothing. Your idea will work only if the "hot" signal and the return path don't form a loop over a large area like this (won't matter if ring is split or not): 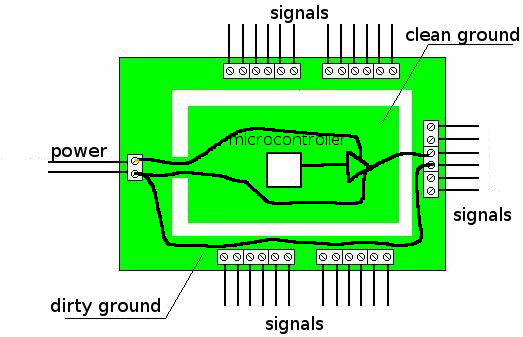 Here's why this example is a bad idea - Consider The Return Pathtm. Note the giant loop the current is traveling through and, most importantly, note how the dirtiness is pulled right into the heart of the clean area:

With an external driver on the outside (dirty ground), you have a small driving signal crossing areas between the microcontroller and the driver, and the higher-current signal will be forced to stay in the loop within the dirty area. The drawback is some bounce between the local ground voltages at the microcontroller and the driver, but these can be kept small when appropriate bypass capacitors are used everywhere you expect spikes or fast transients, and at the input terminal.

Now, the loops created by the "dirty" current are small, and most importantly, they stay where they belong. They look like this for...

(The loops are shown only for transients when driving capacitive loads. Large DC currents will have to be supplied from the input, of course, but they won't hurt as much in terms of EMI, and the only thing to worry about for different local grounds at the microcontroller and the driver/output terminal is the DC copper resistance of your supply and GND nets.)

This may be a solution: 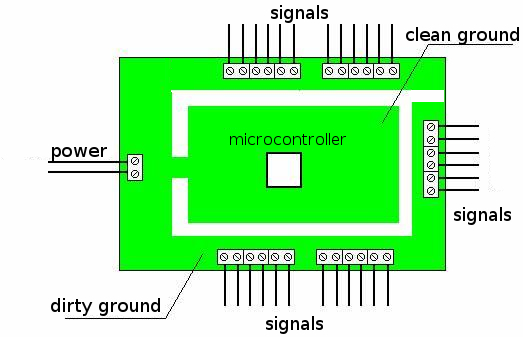 It improves on your second option in that it keeps the connections to the power connector as short as possible, given the placement of the signal connectors.

Your first option may not be too bad, however. You'll probably have a similar current flow as here: power and return path at the top and a pair at the bottom. You would only have a loop if your power would go to the top, and the return path to the bottom. And even then interference will be limited unless you run high currents at high frequencies through it. In that case I would consider a completely different layout, with much shorter connections.

7
Placement/routing of decoupling cap straddling oscillator guard ring on dsPIC
4
AC signal and ground plane with another trace passing between - is this bad?
9
4 layers PCB stack - (signal, signal, power, ground)
4
Dealing with splits in my ground plane
4
Current return paths: which of the two is the better design?
1
differential pair radiation
0
Different printed circuit layout for a transistor
4
Ground planes disposition in Ethernet connection
3
Does it matter if differential pairs have no reference plane or cross reference planes?