Calculating current in an unknown transformer with multiple isolated secondaries

I have an old power transformer that I'm retrofitting into a new valve amplifier. Having measured the voltages on the secondaries when 230V is applied to the primary and got the following results:

The turns ratio of each winding is therefore:

This seems correct at first, but using these figures the combined power output of the secondaries would be three times that of the primary which is obviously incorrect as Vp * Vp = Vs * Is.

The measured DC resistance of each winding is:

Therefore the total resistance on each secondary is:

Therefore the VA rating of each winding is

Therefore the total VA rating is 3482 and the power distribution between each secondary is:

So now we can revise the current values we calculated earlier:

This balances the power on each side of the transistor however it doesn't really correlate to reality. The third winding is for the valve heaters and given that his amp contains 4x 12AX7 and 4x EL34 the current required is going to be around 5.4 A however that's clearly not the case. The first secondary should also be much higher, in the range of 500 mA.

Where have I gone wrong? Is my original current measurement on the primary wrong? Do I need to be considering the load into which each secondary will be delivering the current?

power-supply transformer vacuum-tube
share|improve this question
asked May 29 '18 at 20:58

I didn't read through the whole post but I suspect that your secondaries were unloaded (open-circuit) and the actual secondary currents therefore were zero. Unfortunately this renders the rest of your post irrelevant!# 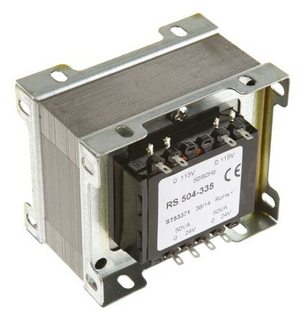 Your primary current is just magnetising losses on the primary.

The steps for estimating the parameters of an unknown mains transformer, where you already know the primary voltage (Vpri), are as follows.

1) Estimate the approximate total VA (VAtot) from its weight (as per this link you identified).

2) Check the transformer is 'OK' by measuring the primary current when all the secondaries are unloaded. This is the magnetising current (Im), and should be well below the running current (Ipri_full_load) you'd estimate from the ratio VAtot/Vpri.

3) Measure the off-load voltage on each secondary to calculate the turns ratios.

This step does not tell you the current flowing through the secondaries.

This step tells you, for a fully loaded transformer with all secondaries in use, what load currents should not be exceeded to avoid overloading any particular secondary. It's up to you to make sure the loads don't draw more than that current. The transformer will attempt to supply whatever current the load tries to draw, at that secondary voltage.

The main limitation on a transformer is thermal, not current density. If you are to use only one secondary, then you can allow the load on that secondary to draw a bit more than its estimated VAsec. How much more? You will need to measure the temperature rise of that secondary, by measuring its hot resistance after coming to thermal equilibrium at your desired current. The resistance of a copper winding increases by roughly 10% for every 25C increase in temperature. I normally limit the temperature in a unknown transformer to 70C, you may feel more, or less, ambitious. Start with a load of VAsec, and increase from there. Temperature rise will be more or less proportional to load^2 (as copper heating is given by \$I^2R\$), so there's not much scope for a large increase.

In your case, Janka estimates your VAtotal as 60VA from the dimensions, though Transistor guessed at 100VA from the magnetising current. If you had provided a weight, that would have been better. Let's use 100VA as a round number. Your V^2/R calculation has already split the VAs as 80/10/10 (note the number of significant figures I'm using for the estimates), so the 350v secondary is allocated 80VA, the 35v secondary 10VA and the 6.3v secondary 10VA . Your measured 70mA for Im is quite reasonable, being 16% of VAtotal. When you load your transformer, keep the currents below 80/350 = 230mA on 350v, 10/35 = 300mA on 35v, and 10/6.3 = 1.6A on the heater winding. Measure your winding temperatures on load using the resistance method for better peace of mind. If you do need 5.4A for your heaters, then this is not the transformer for you.

Not the answer you're looking for? Browse other questions tagged power-supply transformer vacuum-tube or ask your own question.

1
How to test the maximum secondary current of a step down transformer?