I am planning to connect (at least) two Raspberry Pi + PiCAN2 shields via CAN.

I think I understand the concept of a daisy-chained multidrop CAN line, but what about using the 120 ohm resistors for termination that are provided on board by the PiCAN2 shield?

As far as I understand when I simply connect CAN High and CAN Low respectively between both PiCAN2 shields A and B as shown below, I should use the 120 ohm resistors on both sides for termination. Am I right?

What happens when I add a third identical node (Raspberry Pi + PiCAN2 shield) C to the CAN bus? Do I need to terminate also on this node? As I can without problems also use the terminator on C, is there any drawback to using the 120 ohm resistor on all nodes, not worrying about the geometry of the network? 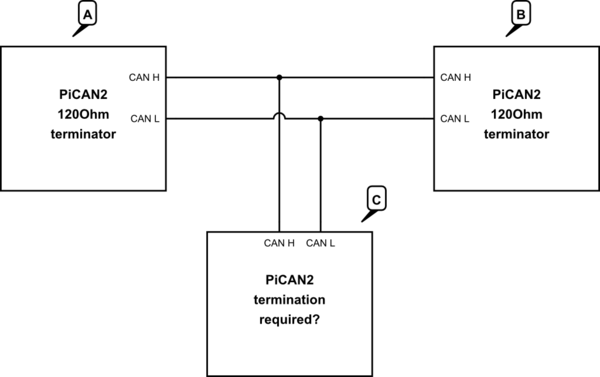 A CAN bus is meant to be an (electrically) straight line with a terminator at each end and nodes (at least two) attached along it. That means just two terminators.

If length and/or noise margin are not of concern, some stubs out to nodes can be added. As long as they’re short, they don’t hurt too much. One imperfect heuristic is to take twice the length of the stub away from the possible total length; a coarse approximation, but a starting point.

A node looks like a 10 kohm (or more) load on the bus. If you attach extra terminators, i.e. more than the required two, near the center of the bus, that adds a lot more load (about 100 times as much current), so it greatly reduces how many nodes you can attach to the bus. One extra probably will still work, but might not handle noise well. Two or more extra terminators (i.e. 4 total) are unlikely to work.

With three nodes close together, almost any wiring will work, so don’t worry about stub wiring too much. Just put two terminators on, one at each nominal end, and enjoy. 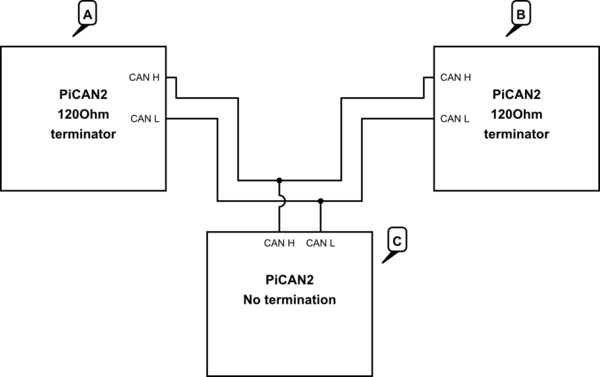 Not the answer you're looking for? Browse other questions tagged raspberry-pi can bus termination or ask your own question.

7
Does it matter which 2 nodes on a CAN bus you terminate?

7
Most efficient way to handle addressing / termination in a daisy-chained CAN bus?
1
Using different termination types on CAN bus
3
The CAN bus in this vehicle has only one 120 ohm termination resistance. What problems would this provoke?
0
Should I remove the termination resistor from the CAN Bus transceiver module?
3
Multiple Terminating Resistors on RS-485 Bus
0
Does the standard termination of 120 ohm really suppress reflections in recessive state in CAN?
2
CAN Bus - Daisy chaining nodes
0
CAN Stub node termination in a network - 9.28k resistor
1
CAN connect two galvanic isolated systems