How does 3 phase AC generate more voltage than single phase? Aren't the wires connected in parallel?

If you connect two voltage inputs in series it results in a higher voltage, if you connect them in parallel it creates a higher capacity / max current, but voltage is unaffected. If you use 3 plugs, one to each phase of the AC line as shown below, why does this generate higher voltage rather than just higher current? I don't quite understand. Also what I don't get is how they can power something if the sum of the 3 phases is 0 volts (which is the reason that 3 phase is used). 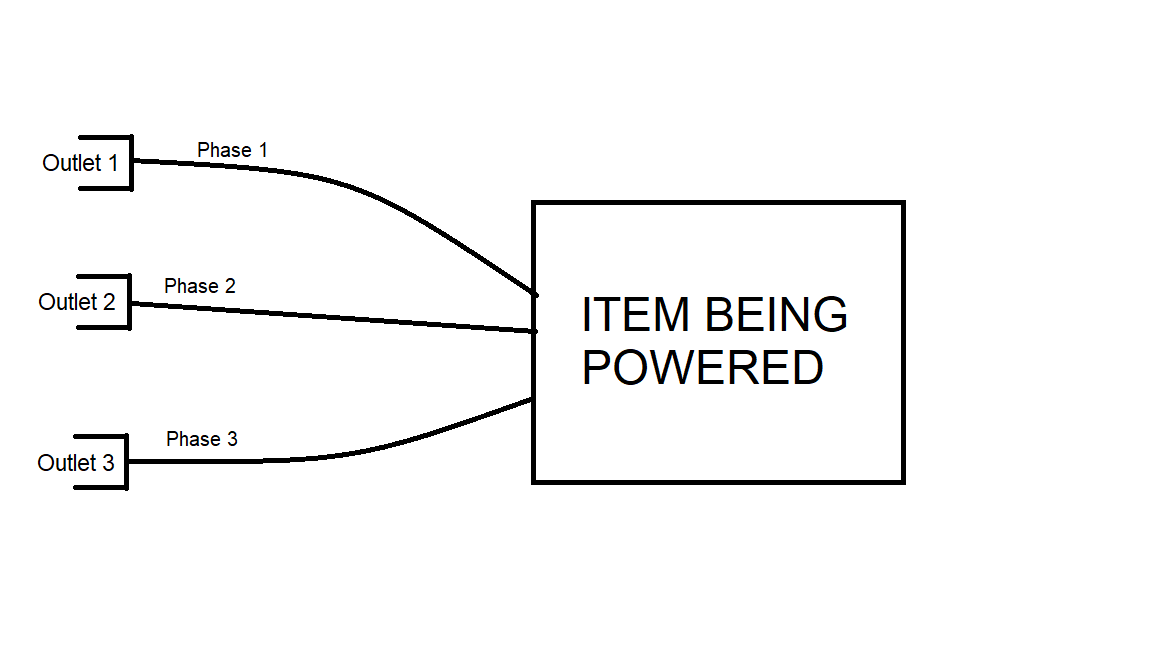 I think you have several misunderstandings about how AC power and three-phase AC power work.

First of all, your diagram looks like you've drawn each 'phase' with a two-wire plug, each with a separate hot and neutral like a normal single-phase AC plug. That's not how it works -- there's just three wires, one for each phase, and an optional neutral wire. (I'm ignoring the extra 'ground' wire, which exists for safety only and does not participate in normal functionality.)

It also seems like you're not thinking clearly about how AC current works, when you say 'the sum of the phases is 0 volts'. This diagram illustrates what's happening in a three-phase circuit -- the point where three wires meet on the left is the generator, or the source of the power, and the point where they meet on the right is the load, or the device using the power.

And here's an image that shows the relative voltages of the three phases over time:

The three phases are neither in series nor in parallel, because one phase wire by itself is not a voltage source in the sense that you would see in an electronics textbook. If you take one phase wire plus the neutral wire, those two wires together make an AC voltage source, which acts just like regular single-phase AC.

If you instead take one phase wire plus another phase wire from a different phase, that is also an AC voltage source -- it supplies a voltage that looks like the difference between two of the waves in the graph above, e.g. subtract the blue line from the red one. This is again a sine-wave voltage that looks just like regular single-phase AC, although it's a little harder to visualize why.

Using all three phase wires together looks like a more complicated kind of voltage source, that can't be easily broken down into several simpler sources in series or in parallel. In practice it's most often used for driving motors, which benefit from having power that flows in the way depicted in the animation above -- such that there is always current between at least two phases, with no lull to zero in the middle of a cycle like single-phase AC. This is beneficial for creating smooth rotation.

If you connect two voltage inputs in series it results in a higher voltage, ...

... if you connect them in parallel it creates a higher capacity / max current, but voltage is unaffected.

Correct if they are in phase.

If you use 3 plugs, one to each phase of the AC line as shown below, why does this generate higher voltage rather than just higher current? 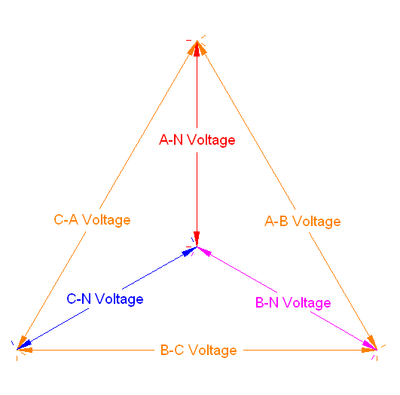 Also what I don't get is how they can power something if the sum of the 3 phases is 0 volts (which is the reason that 3 phase is used).

You are not thinking about it correctly. I have drawn a picture for you, using your picture as a starting point. I am using the North American voltages of 120/208 Y configuration three-phase power. There are voltages and configurations in use both in North America and elsewhere. 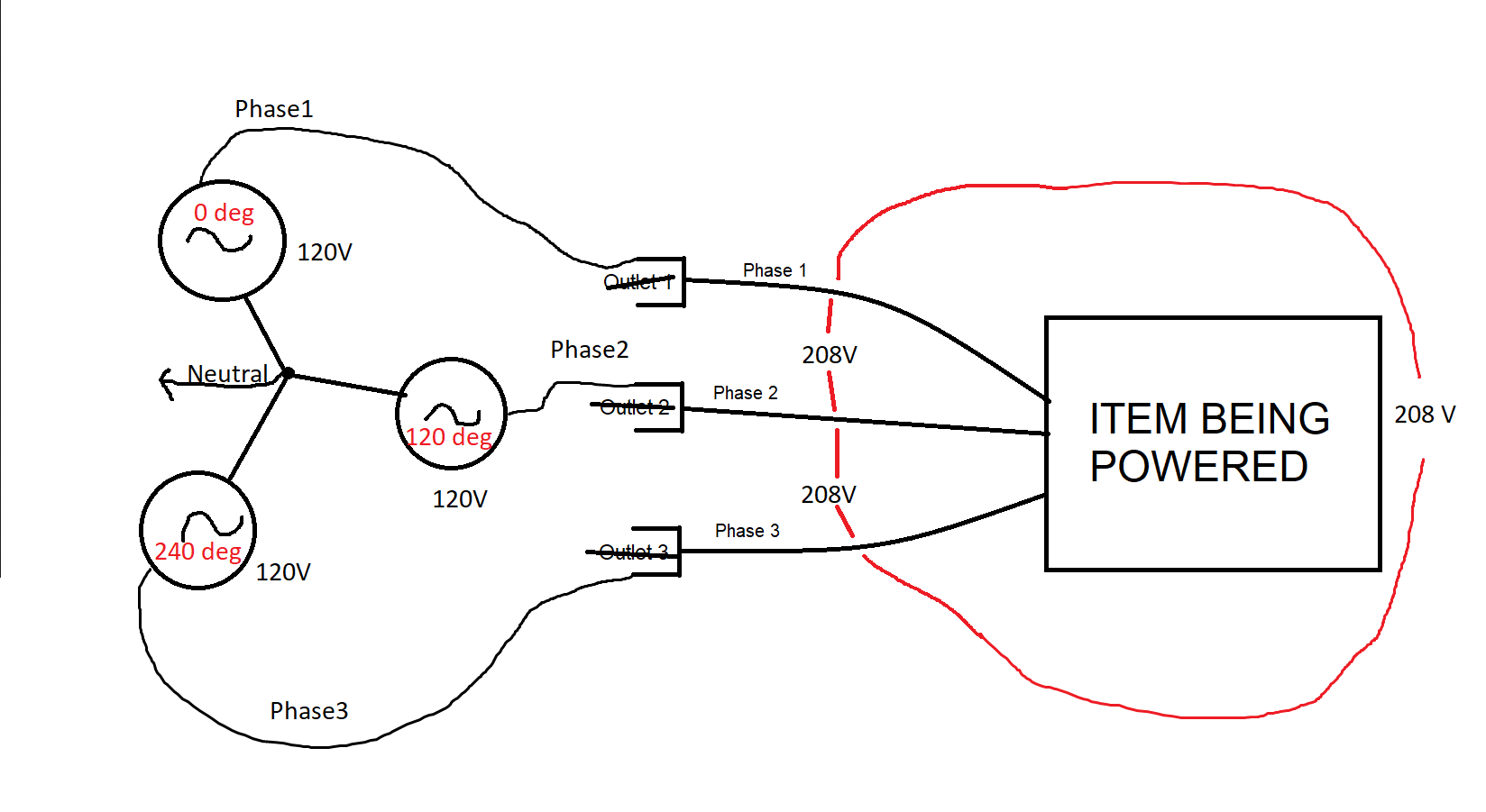 If you use a voltmeter to measure the AC voltage from any phase to neutral, you will get 120V. If you measure directly from any phase to any other phase, you will get 208V. You may ask, why don't I get 240V from phase to phase? The reason is that the three phases are only offset by 120 degrees. If they were offset by 180 degrees, then you would see 240V. But then you wouldn't be able to get three separate phases, because there are only 360 degrees in a circle.

Hopefully this picture will help you understand. It may also be a good idea to play with an excel spreadsheet (or google sheet) for a while to gain further understanding. Create columns for phase1, phase2, and phase3. Then create columns for the voltage from phase1 to phase2, phase2 to phase3, and phase3 to phase1. It should all start to make sense.

This is not the only three phase arrangement. The three phases can also be arranged in a format called Delta, in which case there would be no neutral.

0
How can this 3-phase PM Synchronous AC servo motor operate with single-phase?

3
What causes unequal phase-to-neutral voltages in three-phase distribution systems?
0
Use CT current sensor to measure AC current of a single device
1
If Input is above specific Voltage than only get output
0
Why is it said that when voltage source connected in series would only increase the voltage and not the current?
1
How does three phase add up?
0
Net-Zero Magnetic Fields in a Three-Phase Motor
0
How are the individual homes connected in a 3 phase power distribution system (power grid) so that they have correct voltage?
1
How is Line and Phase Voltage the same for a Delta connected system?
0
voltage drop calculations single phase ac
0
Why does this split-phase generator allow more current for line-to-neutral voltage than for line-to-line voltage?