How are the individual homes connected in a 3 phase power distribution system (power grid) so that they have correct voltage?

For a single phase distribution system it's simple, each home has one wire coming from the neutral and one from the live, in turn each outlet has a live and a neutral wire. The live is 120V relative to earth, which is the neutral wire's voltage (ignoring ground because that is just there as a safety feature).

For 3 phase (I am talking about standard North America three phase where two phases are given to each house, not industrial 3 phase motors) there is a neutral wire, but it is thinner than the live and meant to simply carry away current from unbalanced loads, not used under ideal circumstances, so since it is not a main source being used to carry the electricity and I will assume this is an ideal circumstance so we can ignore the neutral wire. I would then think that this would mean that two live wires would need to feed to one outlet, with one of the live wires in place of the neutral, creating the circuit. But the standard voltage of a wall outlet is 120V, and two live wires makes 208V because they are only 120 degrees out of phase. From my research I know that the 208V is used in some appliances, but most use 120V.

So my question is this: How do you get 120V from a wall outlet without using a neutral wire, if each wire individually is 120V relative to ground, and two lives connected makes 208V? This diagram may help you understand my question. 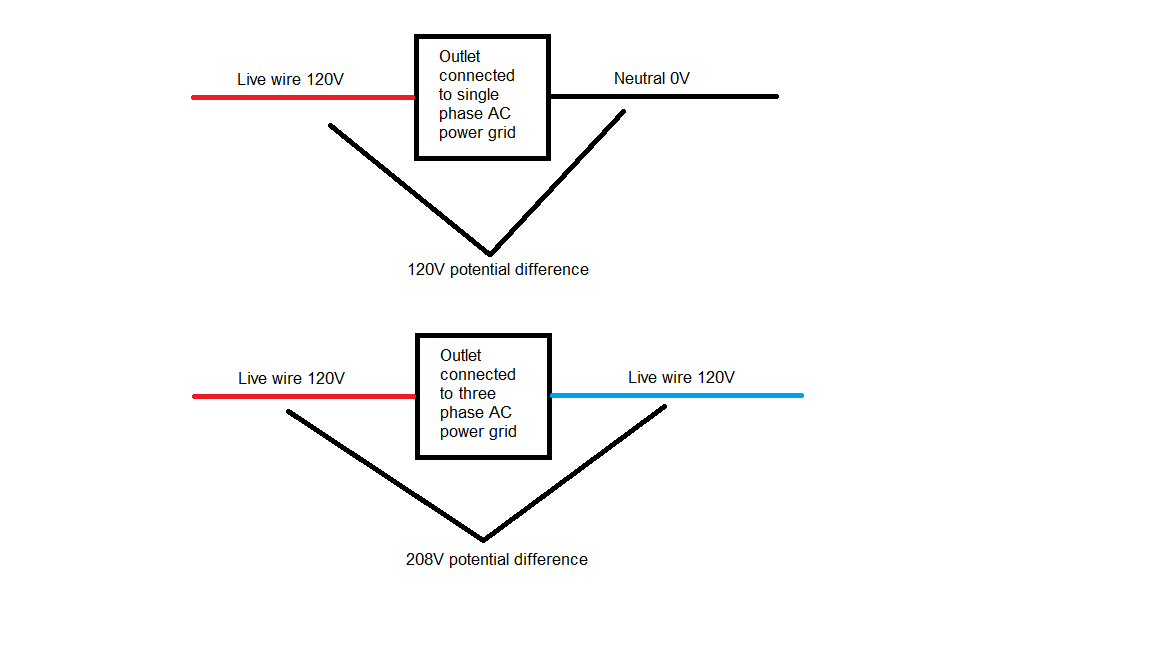 You are either in New York City or certain countries in Central America which do that. Brazil does something similar but at 127/220V, which is close enough to work with most North American appliances.

If you have two poles / phases L1 and L2 neither near earth, and you want 120V, you will need an isolation transformer. An autotransformer won't do because 120V requires a neutral wire that is near earth potential for safety. It might be OK if the 120V machine is double insulated.

Easier is to just pull a cable to that location which has a neutral wire.

You cannot use equipment safety ground as a current return. If anything goes wrong it will light up your entire grounding system. Things which are supposed to be safe will be lethal.

Everywhere else in North America, 3-phase is only used for transmission. Near your house, one phase is tapped by a single phase transformer. The transformer gives 240V center tap which goes to the houses.

For most residential power in the USA, there are transformers that are dedicated to single-phase residential power distribution. Each transformer has the primary side connected to the distribution voltage that is thousands of volts. The exact voltage of the primary and the connection details are not important for this question. The secondary of the transformer is 240 volts with a tap in the center of the winding so that higher power residential loads like a clothes dryer or central air conditioner can be connected to 240 volts. Two groups of `120 volt circuits are connected between the center-tap neutral and one or the other of the ends of the winding. In that way, the 240-volt service is split into 120-volt services.

The transformers for residential service are located on the power poles or on concrete pads where they serve a neighborhood or part off a neighborhood. An apartment building may have a transformer inside the building.

You don't. You can't. It doesn't work like that.

If you are really using three-phase service directly to some building, and providing 120V outlets in that building, with no transformer in between: you do that using the neutral wire. You can't do it without using the neutral wire. Ideally you roughly balance the loads on the three phases, but you don't have to balance them perfectly, and if you have three-phase service to your building, you are presumably driving HUGE high-powered loads with it, so some dinky little 120V outlets to run your computers or whatever aren't going to make a big net difference to the draws on your phases, and using the neutral for them is harmless. If you have a lot of 120V appliances, you balance which phases you put them on, to try to keep the draw roughly even.

If you have three phase service up on a pole, and you're going to split it out to go to people's houses: you have a transformer up on the pole to convert it to one or more 240V split-phase circuits, each of which is effectively two back-to-back 120V single-phase circuits that you can put in series. Whether or not you physically use a neutral wire on the three-phase side of the transformer, is immaterial to the question of whether each downstream split-phase circuit will draw in an equal, balanced way on all three upstream phases: it will not. You will need to manually balance the loads across the downstream circuits when designing the system. That's just the way it goes. It doesn't have to be exact.

Not the answer you're looking for? Browse other questions tagged voltage ac three-phase single-phase or ask your own question.

0
Why is using a single phase device across phases of a 3 phase outlet OK?
6
Do I have pseudo three-phase power at home?
1
Why there are live and neutral wires attached to house's wall sockets
0
Hooking up a variable frequency drive
0
Can I identify live or neutral wire with Klein CL1000
5
Safety of designing / using a plug that connects between two different wall outlets for increased voltage?
0
voltage drop calculations single phase ac
5
Does the neutral wire have any voltage?
0
Single and 3-phase load calculations