I'm trying to figure out emitter-follower voltage regulator for my solar panel. Panel outputs almost 7V on open circuit and 1.2A at short circuit. I want to use it as phone/powerbank charger -> 5V output. 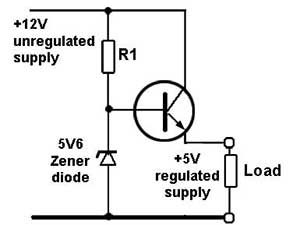 Since input voltage will vary anywhere up to 6V (under load) I think standard regulators won'tdo it for me (high voltage drop, doesn't work near 5V input).

I have some question I couldn't find answers to though.

I think I'm a little experienced in electronics but it's still a hobby for me and I learn something new almost everyday.

Thank you for your time and possible answers.

(In general, these ratings are specified for \$\frac{1}{4}\:\text{W}\$ operation. So if you multiply the larger test current times the rated zener voltage, you should find that this is about \$250\:\text{mW}\$.) 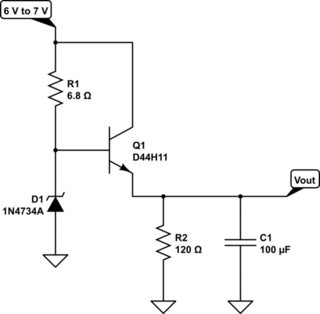 On the output side I've added a bleeder resistor and an electrolytic capacitor. The bleeder resistor performs two functions: (1) it provides a minimum load on the design to keep it in an active mode; and, (2) it quickly bleeds charge from the output capacitor when the power is turned off. Both functions are useful.

This range of currents is a problem because it means the zener diode has too wide of a potential variation. Recalling from the zener datasheet, there is about \$5\:\Omega\$ impedance at \$45\:\text{mA}\$. Assuming this holds, this means the zener would range something over \$800\:\text{mV}\$ of variation, which I'm sure isn't acceptable.

Lowering \$R_1\$'s resistance would perhaps make the variation less, but at the expense of an increased output voltage and very excessive power dissipation in the zener. Raising \$R_1\$'s resistance would make the variation worse and might starve the BJT. Trapped between a rock and a hard place, so to speak. This is due to the fact that you do NOT have much "regulation headroom" here. You only have as little as about \$400\:\text{mV}\$, but this can vary to over \$1.4\:\text{V}\$, too. So a factor of 3.5X!!

Dealing with that kind of voltage variation with a simple resistor alone is what's causing the huge variation and making it difficult to manage the situation. You'll need to find another way.

Let's say you want to keep this a linear (not a switcher) design. The hard part here is the voltage headroom, as just mentioned. But there is a way to do this. By allowing one of the BJTs of a current mirror to operate in saturated mode. It's harder still, because I want to deal with both \$V_\text{BE}\$ variation (most important of the two) and \$\beta\$ variation. 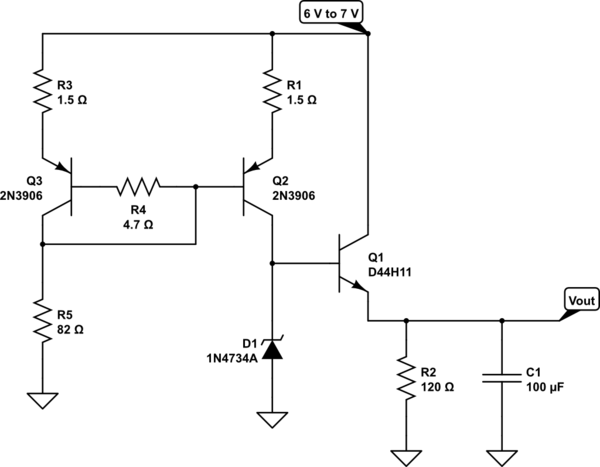 That should work. The smaller saturated BJT used in the current mirror will not exceed about \$100\:\text{mW}\$. But it may vary from \$10\:\text{mW}\$ to \$100\:\text{mW}\$ over the solar powered voltage range. The other smaller active mode BJT used in the current mirror will be about a constant \$50\:\text{mW}\$ regardless of the solar powered voltage range. I've added some resistors to deal with the differential vagaries of the temperature variations (as much as \$\pm 10\:^\circ\text{C}\$ differential) between the parts and part variations of \$V_\text{BE}\$ and \$\beta\$ (equivalent to another \$\pm 7\:^\circ\text{C}\$ variation in temperature.) Ambient temperature variations are "common mode" so to speak, so the circuit should be fine on that point.

The details on the mirror resistor values are a little more complex and are also a matter of debatable judgment. Different designers may arrive at somewhat different values. (Not a lot different, though.) I'll avoid the long discussion and hope you can simply accept that there was some thinking behind their choice.

Note that it takes some extra work to deal with the 3.5X variation in headroom. But at least it's possible to manage the situation. The upshot is that you cannot really use your schematic (or the one I started with, at the outset.) You have to take an extra step as shown above to put the circuit into reasonable management.

This doesn't directly answer the question, but addresses the actual problem.

Instead of a linear regulator, you'd be better off with the right buck switcher. That will be able to deliver higher peak output power, work with lower input voltage, and won't get so hot and cause problems having to get rid of the heat.

At this low voltage, you can find buck switcher chips with built-in switch and synchronous rectification. You supply the inductor, output caps, and a few other parts around the chip.

These kinds of chips can usually operate with the input fairly close to the output, likely less than what you will get with a transistor whose base current comes via a resistor from the collector. Your total C-E drop in your proposed circuit is the B-E drop plus whatever voltage it takes across R1 to supply the base current. That total will be 750 mV or so at best, more likely 800 to 900 mV in practice.

Not the answer you're looking for? Browse other questions tagged transistors voltage-regulator solar-energy or ask your own question.